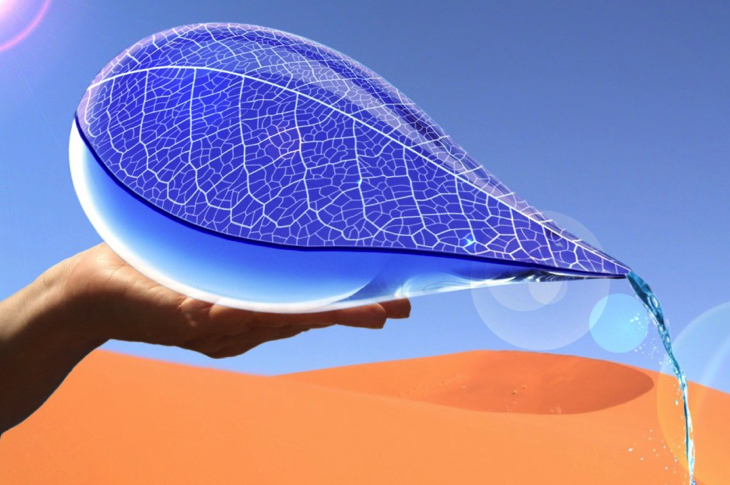 This designer is looking forward to the future.

In an era when humans are taking from the Earth much more than they’re giving, it’s important that developers continue to create sustainable solutions to problems that the globe is facing or will face in the near future. The water crisis that is impacting the whole planet, caused primarily by climate change and overpopulation, calls for new ways to produce water even when traditional natural resources are scarce so that people don’t die of dehydration.

It’s projected that in 2040, 33 countries are expected to face extreme water stress, and many of these nations have huge expanses of arid land with no visible source of water. It’s information like this that inspired Ap Verheggen, a designer from the Netherlands, to develop his latest idea for addressing the pressing problems surrounding water.

His initial design, an artistic statue called the SunGlacier, was erected with the technology to produce cool drinking water from condensation using solar power for a community. His new design, a handheld vessel called the WaterDrop, works similarly but is for personal use. Ap explained,

“If temperatures rise, the air contains more water. Normally, higher temperatures also mean more sunshine. So, why not focus on harvesting water out of the air, powered only by renewable solar energy? In this way drinking water and water for agriculture become available in most dry parts of the planet.” 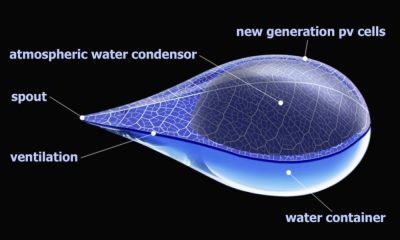 Scientifically speaking, photovoltaic modules on the outside of the device would absorb the solar energy throughout the day, which would then used to cool the air and produce condensation while also pushing airflow through the canister with a fan. The water drops that are produced would be collected in a small region of the device, and Ap recommends that if the device ever comes to fruition there should be small rocks added in order to provide necessary minerals.

Yes, Ap recognizes that, “It is still science-fiction, but for sure PV cells increase in efficiency, (only a matter of time) next to the speeding development of materials that store the cold of the night to help pre-cool the inlet-air during [the] daytime.”

This designer has moved past the ‘what if?’ part of designing new, highly-sustainable products and is already presenting them to the world. He said that since solar technology is developing and improving rapidly, there’s no need to wait for new technology to be released when you can actually design it yourself. Though he doesn’t have the know-how to make this product himself, Ap said,

“There’s no sense to be pessimistic about the future. With my projects, I want to show people that there are solutions, but you have to cross a certain border, and I feel that art is the perfect vehicle to break through the border.”

This article (Solar-Powered Handheld Vessel Can Turn Hot Air Into Cool Drinking Water) is free and open source. You have permission to republish this article under a Creative Commons license with attribution to the author and True Activist.