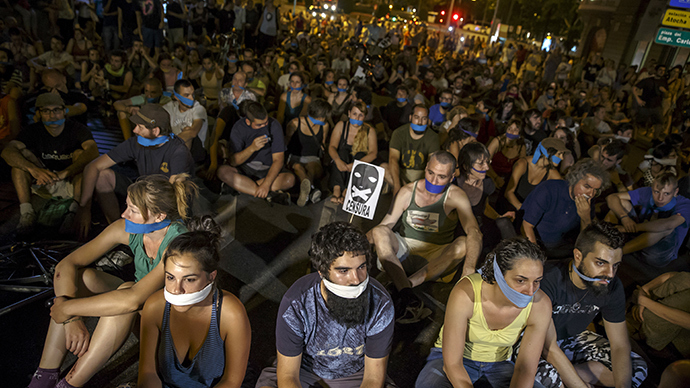 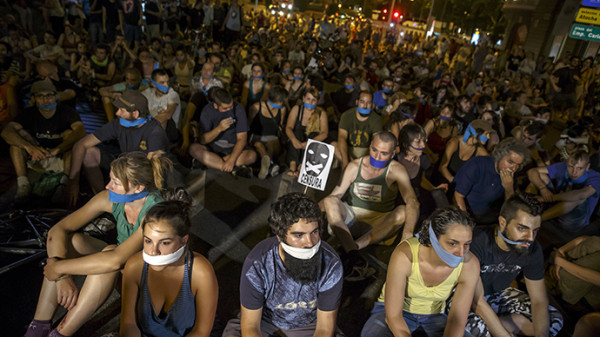 (mindsetsathreat) While all eyes have been on Greece’s upcoming referendum, one very sinister law officially came into effect on July 1st. That law is Spain’s new ‘Spanish Citizen’s Security Bill’. The law has criminalised protest outside government buildings, filming police officers and insulting police officers with fines ranging from 600 to 600,000 euros.

The law also cracks down on online activism. It obliges cybercafés and similar establishments to keep records of their clients’ IDs. Non-compliance with this measure could result in fines ranging from 100 to 30 000 Euros and criminalises sharing of video footage of police online.

Effectively in Spain it is now illegal to peacefully protest in anyway that’s actually effective. The use of sharing videos of police officers through social media has become a widespread tool for exposing abusive officers and protest outside government buildings is one of the pillars of activism. After all, why bother protesting if the ones you’re protesting against won’t even see it?

However, the ‘gag law’ has been met with heavy opposition by the Spanish people with thousands of citizens protesting outside the Spanish parliament and on the streets. Many of them wearing gags in protest of the blatant attack on their right to assembly and freedom of speech.

Spain, like much of Europe, has been hit with crippling austerity measures since the 2008 banking crisis. In fact, statistics show that nearly 100 families are being evicted daily in Spain. Naturally in response to such measures civil unrest has increased dramatically among the European countries hit worst by the crisis like Greece, Italy and Ireland. Irish senator Lorainne Higgins’ ‘internet safety’ bill recently passed the second stage in the Seanad. The bill “aims to protect against and mitigate harm caused to individuals by all or any digital communications”. Although it’s vagueness is likely to be abused and used against activists. It’s timing should not be seen as coincidental that Ireland has seen a massive surge in protest and activism in the past two years in reaction to austerity, not to mention that whole thing called right to free speech. As usual ‘our own safety’ is used to justify the erosion of our rights, although I wonder who’s ‘safety’ is truly in mind when these kind of laws are drafted.