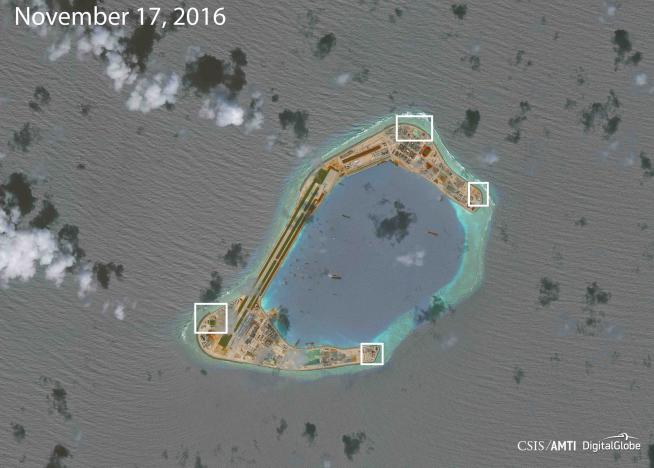 SPRATLEY ISLANDS (WeAreChange) — While Americans were busy caught up in the whole election controversy and the mass fallout that still continues even until now, the Chinese were busily building up their little empire in the South China Sea.

A U.S. think tank has reported that China appears to have installed weapons, including anti-aircraft and anti-missile systems, on all seven of its artificial islands in the South China Sea.

The Asia Maritime Transparency Initiative (AMTI) at the Center for Strategic and International Studies said its findings, made available first to Reuters on Wednesday, come despite statements by the Chinese leadership that Beijing has no intention to militarize the islands in the strategic trade route, where territory is claimed by several countries.

China defended its actions on Thursday saying that while its construction on islands and reefs in the South China Sea was mainly for civilian use, it was “legitimate and normal” for it to take steps to defend its territory. 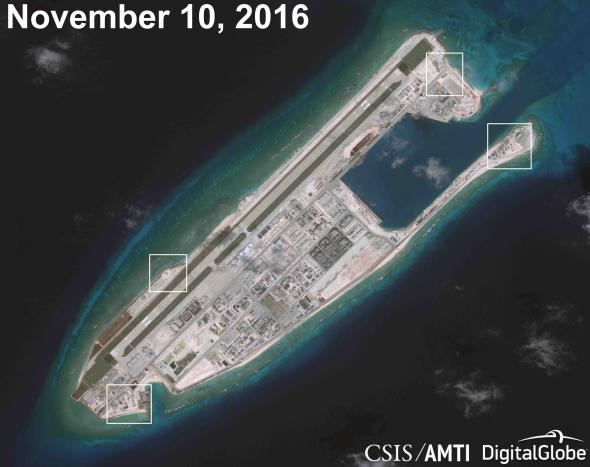 A satellite image shows what CSIS Asia Maritime Transparency Initiative says appears to be anti-aircraft guns and what are likely to be close-in weapons systems (CIWS) on the artificial island Fiery Cross Reef in the South China Sea in this image released on December 13, 2016. Courtesy CSIS Asia Maritime Transparency Initiative/DigitalGlobe/Handout via REUTERS 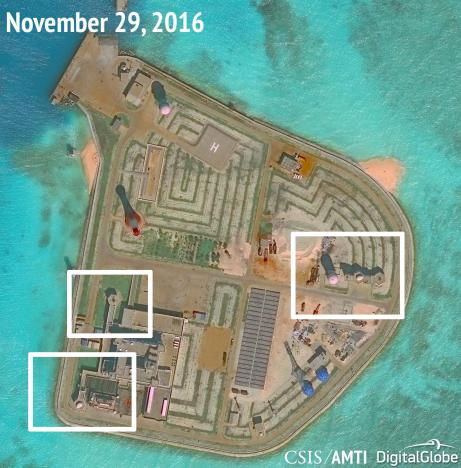 A satellite image shows what CSIS Asia Maritime Transparency Initiative says appears to be anti-aircraft guns and what are likely to be close-in weapons systems (CIWS) on the artificial island Johnson Reef in the South China Sea in this image released on December 13, 2016. Courtesy CSIS Asia Maritime Transparency Initiative/DigitalGlobe/Handout via REUTERS

Obviously these developments are quite a concern to neighbouring countries – many of which hold competing territorial claims in the South China Sea.

The Philippines said it was still verifying the report: “But if true it is a big concern for us and the international community who use the South China Sea lanes for trade,” said Defense Minister Delfin Lorenza during a visit to Singapore with President Rodrigo Duterte.

“It would mean that the Chinese are militarizing the area which is not good.”

Singapore-based South China Sea expert Ian Storey said he believed the move would help ready the facilities for the probable next step of China flying jet fighters and military transport planes to its new runways.

“From the outset it’s been quite obvious that the artificial islands were designed to serve as military outposts in the South China Sea,” said Storey, of the ISEAS Yusof Ishak Institute.

“Even while tensions are at a relatively low ebb, I think we can expect to see military flights to the Spratlys in the coming months – including the first jet fighters,” Storey said.

The United States has criticized what it called China’s “militarization” of its maritime outposts and stressed the need for freedom of navigation by conducting periodic air and naval patrols in the disputed waters that anger Beijing on a regular basis.

U.S. President-elect Donald Trump, who takes office on Jan. 20, has also criticized China’s muscle-flexing demonstrations in the South China Sea while indicating he may adopt a tougher approach to China’s assertive behaviour in the region than President Barack Obama.

The State Department said it would not comment on intelligence matters, but spokesman John Kirby added:

“We consistently call on China as well as other claimants to commit to peacefully managing and resolving disputes, to refrain from further land reclamation and construction of new facilities and the militarization of disputed features.”

China’s Defense Ministry argued on its microblog on Thursday that it was “legitimate and lawful” for it to place defensive military installations on islands where it claims Beijing had “indisputable sovereignty”.

“If someone makes a show of force at your front door, would you not ready your slingshot?” it said.

China’s not willing to budge. Neither is the U.S. and its allies. Unfortunately, it seems that war is an ever-growing possibility between the two super powers.