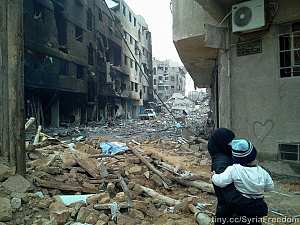 Ahh, Syria circa 2015: an idyllic land of peace, prosperity, and security… said no one ever. Well, except for the U.S. State Department, which counts “bringing peace [and] security to Syria” among its top 2015 accomplishments. In a year-in-review post on the department’s official blog, it also takes credit for “step[ping] up to to aid the Syrian people during their time of need” and developing a plan for “political transition” that “is responsive to the needs of the Syrian people.”

Syria—as you might recall if you haven’t lived in an isolated underground lair for the past few years—is currently overrun by the brutal Islamic State and losing citizens by the millions, triggering something of a global geopolitical crisis as refugees flood neighboring countries and Europe. Meanwhile, U.S. “aid” has consisted of bombing the crap out of potential ISIS targets and any innocent Syrian adults and children who happen to be nearby.

Let’s look at a few recent headlines and news items about this oh-so-safe and peaceful country:

“On Monday, at least 14 people were killed and 90 wounded in two suicide bombings in the central city of Homs.”
Drone footage shows ‘apocalyptic scenes’ of Syria
Most Syrian rebels sympathise with ISIS, says thinktank
Islamic State truck bombs kill up to 60 people in Syrian town
A Stolen Antiquities Department and a Slave Ministry: Government, Islamic State Style
“One in five persons currently in Lebanon is a Syrian refugee.”
Syria: An endless ‘Calvary’
“U.S. and coalition military forces have continued to attack Islamic State of Iraq and the Levant terrorists in Syria and Iraq, Combined Joint Task Force Operation Inherent Resolve officials reported today.”
Inside Kremlin’s creeping military campain in Syra
Dozens die in strikes on Syrian school district, other areas
A ‘flesh eating’ disease is currently spreading across Syria

If this is what peace and security looks like to the U.S. State Department, then we’re all in deeper shit than we thought.

“Our diplomats have been busy, and they have met with significant success across a range of issues – each of these issues vital in their own way to ensuring the safety, security, and prosperity of the American people,” according to State Department blogger John Kirby, whose “take on #2015in5Words” proceeds to go on for another 1,340 words. Other things the department sees fit to brag about as top 2015 accomplishments include “winning [the] fight against violent extremists,” by which it means holding a conference with that title; Secretary of State John Kerry assuming a two-year chairmanship of the Arctic Council; and making a pie-in-the-sky pact with other nations to “end poverty” and “ensure prosperity for all.”

Elizabeth Nolan Brown is a staff editor at Reason.com.