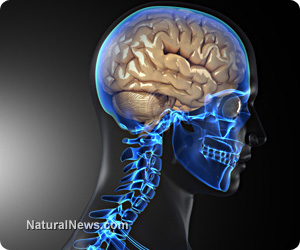 Although many things remain unknown about the roles that zinc and aluminum play in the human brain, one thing is certain: high aluminum concentrations lead to brain damage.

Because aluminum is ubiquitous as both an environmental and industrial chemical, it is impossible to avoid some exposure to this known neurotoxin. Fortunately, a study conducted by researchers from China Medical University in Shenyang and published in the journal Neuroscience Letters in 2008 found that zinc may help prevent aluminum from crossing the blood-brain barrier (BBB), thereby preventing brain damage.

The dangers of aluminum

Although aluminum is highly toxic, our kidneys are fortunately able to flush most of it from our bodies, given enough time. However, aluminum also has a tendency to build up in both bone and brain tissue. People with impaired kidney function are at particular risk of this.

According to a review conducted by researchers from the University of Kentucky Medical Center and published in the journal Neurotoxicology in 2000, aluminum is definitely capable of crossing the BBB, increases the effectiveness of cell-destroying oxidation and may cause damage that mimics the effects of Alzheimer’s disease.

Researchers remain split over whether aluminum directly causes Alzheimer’s disease or other forms of dementia. Studies have suggested, however, that brain damage from dementia may actually increase the brain’s absorption of aluminum, thereby leading to even further cell damage and death.

Zinc and the brain

Unlike aluminum, which is strictly toxic, zinc is capable of playing both health- and disease-promoting functions in the brain. In fact, zinc is the trace metal that naturally occurs in the brain in the highest concentrations.

Researchers know for sure that zinc plays important roles in maintaining the health of numerous proteins, including brain proteins. It also plays a critical role in neurological signaling pathways, possibly even acting directly as a neurotransmitter. Imbalances in zinc concentrations have been noted in patients with brain diseases, including Alzheimer’s, but it remains unclear whether the zinc imbalances are causing the diseases or the other way around.

The Chinese researchers put together what is known about zinc and aluminum in the brain, hypothesizing that increasing zinc levels might help protect the brain from damage by aluminum. They gave rats varying doses of aluminum alone and aluminum in combination with zinc, then tested the permeability and ultrastructure of the BBB, as well as the expression of the is skillful protein F-actin and the brain protein occludin.

The researchers found that aluminum increased the permeability and changed the ultrastructure of the BBB, while decreasing the expression of both F-actin and occludin. These effects were all significantly mitigated, however, in the rats who were given both aluminum and zinc.

“Our present studies suggest that aluminum increases the permeability of BBB by changing its ultrastructure and the expression of occludin and F-actin,” the researchers wrote.

“Zinc can protect the integrity of BBB in juvenile rats that are exposed to aluminum and inhibit the decrease of tight junction protein occludin and F-actin expression in BBB.”

While zinc is an essential nutrient, it may have serious side effects at higher doses, particularly in patients at high risk of heart disease. Anyone considering zinc supplementation should consult with a qualified health provider for advice and supervision.