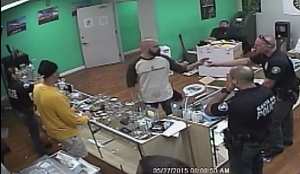 (Reason)Remember the Santa Ana, California, cops who were caught on video munching on what seem to be cannabis-infused chocolate bars after raiding an unlicensed medical marijuana dispensary in May? The Orange County Register reports that three officers who were suspended after the incident are trying to stop the Santa Ana Police Department from using the footage in its internal investigation. Among other things, their lawsuit argues that the officers thought they had disabled all of the security cameras at Sky High Holistic and therefore had a reasonable expectation of privacy. The cops complain that the dispensary never got their permission to record them as they searched the premises.

“All police personnel present had a reasonable expectation that their conversations were no longer being recorded and the undercover officers, feeling that they were safe to do so, removed their masks,” says the complaint, which was filed in Orange County Superior Court. “Without the illegal recordings, there would have been no internal investigation of any officer.” Under California law, “all parties to a confidential communication” must consent to being recorded, but that rule does not apply when “the parties to the communication may reasonably expect that the communication may be overheard or recorded.”

In an interview with the Register, Sky High’s lawyer, Matthew Pappas, noted that police routinely use surveillance camera video against suspects. “It’s pretty pathetic for police to say if we don’t like something that it can’t be used as evidence,” he said. “They knew they were on video….Just because they missed one camera doesn’t make it illegal.”