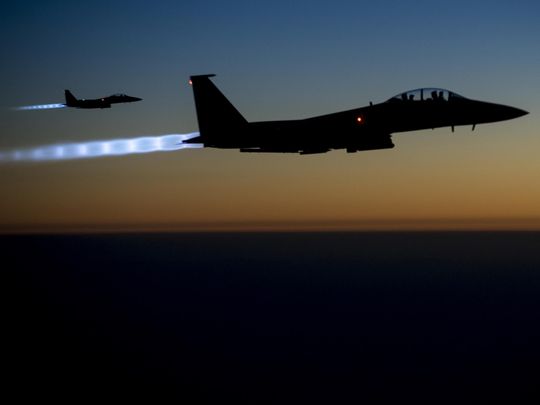 Originally published at Farsnews.com
TEHRAN (FNA) — Well-informed sources in Northern Syrian reported that the Syrian Army troops have opened heavy fire at an American reconnaissance plane in Northern Hasaka, forcing the US plane to leave the country’s airspace.

The sources said that the intense fire of the special forces forced an American reconnaissance plane to leave the region after approaching the army troops’ positions in Qamishli border city.

Meanwhile, a military source confirmed the report, stressing that the US reconnaissance aircraft was flying over the Syrian Army Base in Qamishli and distanced itself from the region after it came under fire.

Local officials confirmed on Friday that several civilians were killed and several more were wounded in the US raid on a Syrian airfield in Homs province.

Governor of Homs province Talal Barazi told reporters that the US strike on a Syrian airfield led to civilian casualties in a village near the base, as well as the airbase itself, adding at least five people were killed and seven wounded.

Two civilians and three military personnel were killed in the strike, AP reported, citing the governor.

The American missile attack on Syria won’t topple its government or change the policies of Damascus, he said after a barrage of 59 Tomahawk cruise missiles targeted a Syrian airfield.

“The Syrian leadership and Syrian policy will not change,” Barazi said in a phone interview with Syrian state television. “This targeting was not the first and I don’t believe it will be the last.”

He added that Shayrat airbase would be rebuilt and would continue to play a role in fighting terrorists.

Barazi told Reuters that firefighting and rescue operations were under way at the Shayrat airfield after the US attack, but he believed that there were not many casualties on the ground.

Barazi said Washington’s escalation of the conflict in Syria only served terrorist groups such as ISIL.

The governor said that the base played a significant role in the recent capture of the city of Palmyra from ISIL.

On Friday, US warships in the Eastern Mediterranean fired 59 Tomahawk missiles at the Syrian airfield, with Pentagon claiming that it was used in a chemical weapons attack against a rebel-held town in Idlib province on Tuesday.

The retaliation came before the UN or the OPCW, the chemical weapons watchdog, could investigate the incident. Washington sided with the rebel-linked activists, which accused Damascus of killing civilians with toxic gas.

The Russian Foreign Ministry reminded US on Thursday that all chemical weapons were taken out of Syria in mid-2014 with Washington’s assistance.

The ministry said that Russia considers US Vice President Mike Pence’s statements claiming that Moscow and Damascus allegedly did not fulfill obligations to destroy Syrian nuclear arsenal to be groundless, Sputnik reported.

Pence had no grounds to say that the 2013 deal on the Syrian chemical weapons’ destruction failed.

The ministry said that Russia-US cooperation on the issue was overall and quite successful.

Moscow said that it was premature to accuse the Syrian government of using chemical weapons in Idlib, adding that Russia insists on conducting a full-fledged probe into the issue.

In 2013, the Syrian authorities agreed to transfer its stockpiled chemical weapons to international control for their subsequent destruction, so as to prevent them from falling into the hands of militants operating in the country.

Syrian opposition claimed Tuesday forces loyal to President Bashar Assad had used a chemical gas on people in the Northwestern province, killing nearly 80 and injuring 200. Assad argued his government had no chemical weapons after agreeing to have them destroyed in 2013. He also ruled out having used chemicals against own people.

Russian Foreign Ministry spokeswoman Maria Zakharova said earlier in the day that the US-UK-France-backed draft resolution on the chemical weapons in Syria was based on fake reports mostly from the White Helmets and the SOHR “which cannot be called reliable.”

The Russian Defense Ministry said early Wednesday the airstrike near Khan Sheikhoun was carried out by Syrian aircraft, which struck a terrorist warehouse that stored chemical weapons slated for delivery to Iraq.