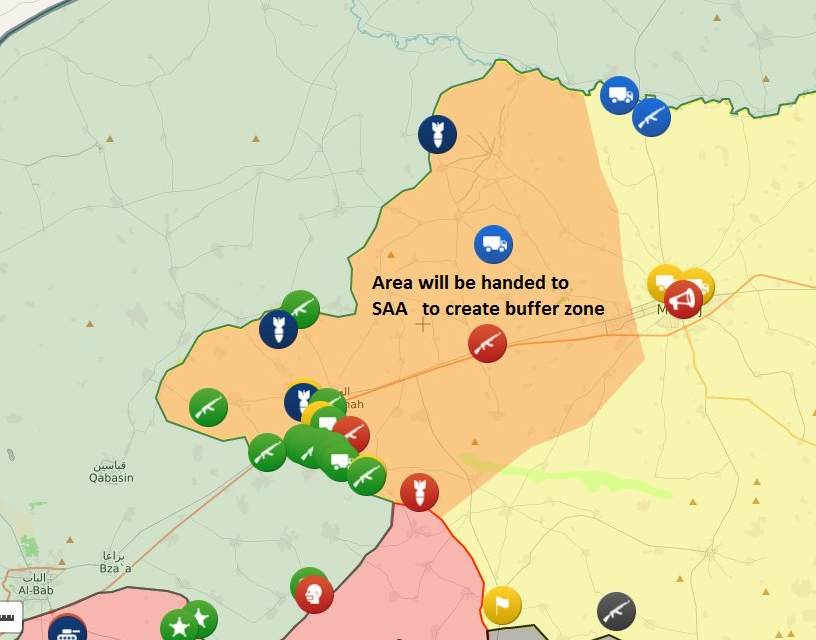 Kurdish-led Syrian Democratic Forces (SDF) agreed to handover a massive area of territory they control to the Syrian Arab Army (SAA) to create a buffer zone against the Turkish Army and other Turkish-led forces in Syria.

The map you see at the top of this article is an estimation provided by Al-Masdar News and not official.

Recently a coalition of Turkey-led armed rebels, backed by the Turkish Armed Forces, launched an offensive against the SDF to capture the city of Manbij. This new operation against the SDF has been so brutal that it caused the Manbij Military Council (MMC) to adopt a military cooperation agreement with the SAA.

The MMC released the following on this decision:

“To reach these objectives [the defense of Manbij] we have transferred, after reaching a new alliance with Russia, the defence of the line to the west of Manbij – where the villages between us and the gang groups [FSA, Ahrar al-Sham] affiliated to the Turkish army are – to Syrian state forces.”

On Tuesday Turkish President Tayyip Erdogan had announced that Turkish Armed Forces would move toward the northern Syrian town of Manbij after completing their operation in al-Bab. Erdogan also ruled out any chance of working with the Kurdish-led Syrian Democratic Forces (SDF).

Syria’s ambassador to the United Nations, Bashar al-Ja’afari, who also serves as the head of the Syrian delegation to current peace talks, said on Thursday that Damascus reserves the right to use force against Turkish Armed Forces invading Syria.

Will Erdogan choose to continue the Turkish offensive in Manbij if it’s against the Syrian Arab Army? We’ll soon find out.