Syrian rebels once supported by U.S. appear to behead child in video 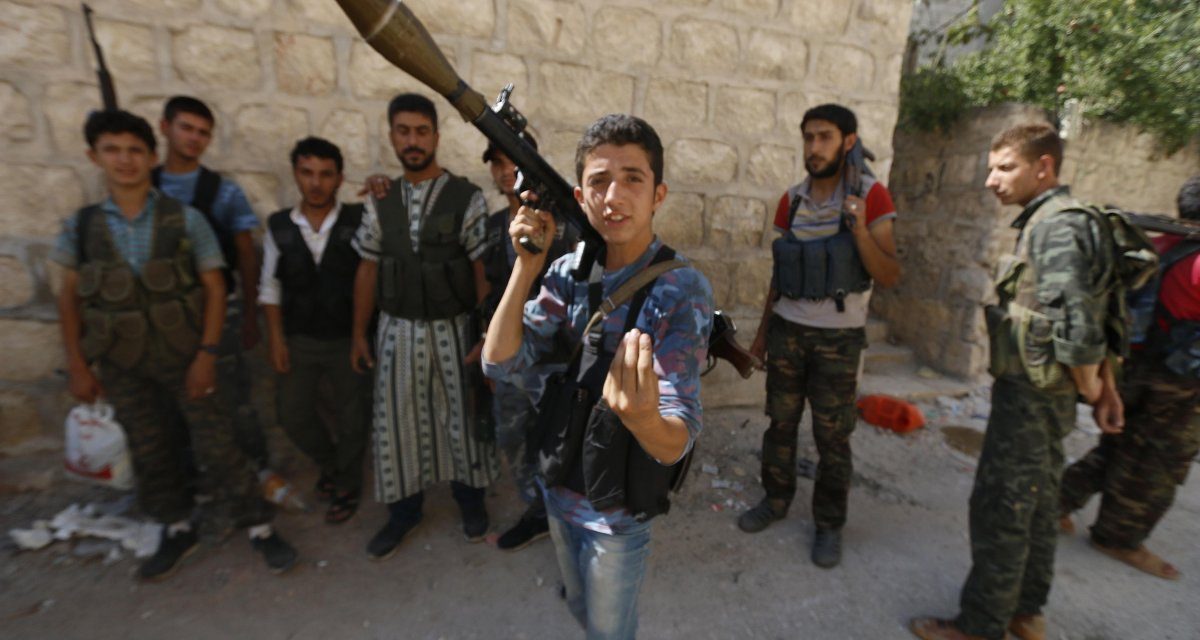 Members of a Syrian rebel group that was once supported by the U.S. appeared to behead a child in a pair of videos that surfaced online Tuesday.

The two clips were circulated on social media Tuesday by both pro-government and pro-opposition activists.

The first purports to show five fighters from the Nour al-Din al-Zinki movement taunting a child they say is from the pro-government Liwaa al-Quds (Jerusalem Brigade) faction. In recent days, pro-government forces have been fighting a pitched battle to take over Handarat, a camp for Palestinian refugees approximately five miles north of Aleppo city’s center. It is part of a larger bid to cut off the Castello road, a vital roadway connecting rebel-held areas of Aleppo to the Turkish border.

“The Quds Brigade has no men, so they sent us children,” says one militant. “These are your dogs, Bashar,” another says, referring to Syrian President Bashar Assad.

In the second clip, a wild-haired, bearded fighter grabs the boy by his hair and pushes him down in the flatbed of a pick-up truck, then furiously saws at his neck with a knife. Once the boy’s head is separated from his body, the militant raises it up to a cheering crowd.

Up until September 2015, Nour al-Din al-Zinki was a recipient of financial and arms support from the U.S. as part of a group of so-called moderate opposition factions working with a logistics hub partly run by the CIA. The group has also received support from Turkey, Qatar and Saudi Arabia.

In a statement Tuesday, the group’s General Command condemned the act as a violation that does represent the “general state” of the movement, saying it was “an individual error.”

It also vowed to investigate the incident and try those involved. The group blamed the international community for its “silence regarding the crimes of the regime forces, which are considered to be the height of criminality and brutality.”

The incident is yet another reminder of the difficulties the U.S. has faced in forging a ground force composed of Syrian rebels who would fight Islamic State jihadists while ensuring a democratic, representative government in Syria.

Many militants have refused to join U.S. training programs; they blame rigorous vetting processes and an insistence that they fight Islamic State instead of Assad’s forces. There are also concerns about the politics of the militants; fighters often support a harsh interpretation of sharia, or Islamic law, that allows brutal punishments, including beheadings, that does little to differentiate them from Islamic State.

Earlier this month, human rights group Amnesty International accused Nour al-Din al-Zinki of abducting and torturing people in areas under its control. In a subsequent statement, the faction vowed to investigate all reported violations.

Tom Morello Speaks Out Against The RNC and Hillary Clinton