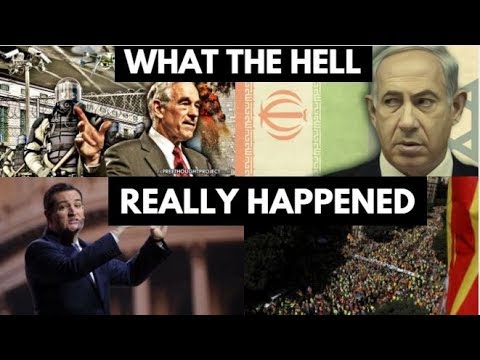 I’m seeing more YouTube channels being demonetized, terminated, and blacklisted so if you can please sign up on our email list. That way we have another way to contact you as I patiently wait for the inevitable next attack on our YouTube channel by the Google Alphabet CIA monopoly corporatocracy.

We’re going to give you the news that’s important and the news that matters. You probably won’t hear anywhere else because we’re living in a day and age of mass misinformation and propaganda. In today’s video we’re going to talk about war mongers bankrupting this country, more saber-rattling by Israel and Saudi Arabia, plus some important psychological lessons to learn from the latest U.S. Senator Ted Cruz.

Video is also available on DTUBE

There is a bigger battle for the future of all wars right now at the US Senate plus a lot more. 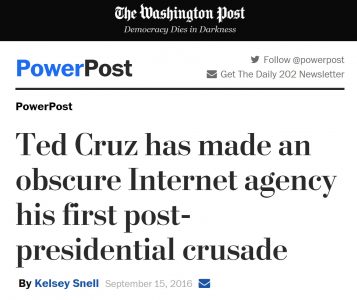 As we are shooting this video, US Senator Ted Cruz is trending worldwide on Twitter. Moments after he liked a pornographic video. He seemingly did not realize that likes are public. Everyone is now going crazy. 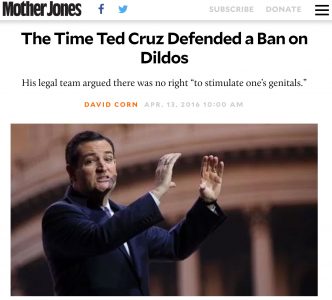 If you study psychology, you understand that what people hate the most in others is usually the shadow within themselves. As demonstrated wonderfully in a hypocritical political system with incidents like this one.

Also with former Republican Senator Larry Craig who helped enact the military “Don’t Ask Don’t Tell” policy. He was also known as an anti-gay marriage campaigner. He was caught soliciting sex from what an undercover male police officer in a public bathroom. 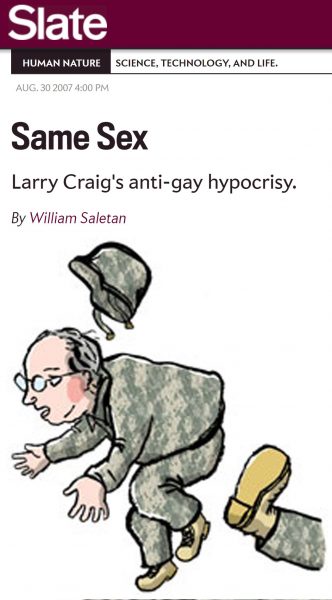 Often if someone hates you because of the way you choose to live your life, or your sex, or your race, or for your personal preferences or choices, there is a reason. I think it’s important for a lot of people to understand that the person is throwing hate against you usually is doing it because of deep psychological rooted problems.

That’s why an example for most people who are homophobic usually have homosexual feelings.  People repress things and hold them in, build on it and make it bigger than it is. That’s why I think the world would be a better place if we all would just stop judging people on what they do when it does not affect us. Understand where it’s coming from so we don’t react negatively to put an end to the cycle of hate and fear. 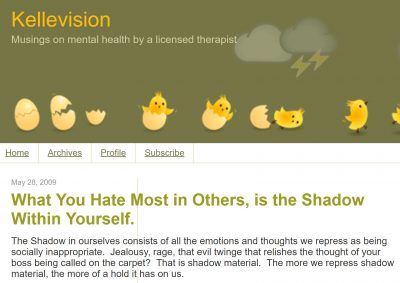 That’s why I am, linking to an article by a licensed therapist. I recommend you check it out. It would be nice if people could stop projecting your fear and anger onto others. That, of course, begins with not giving such a hard time to Ted Cruz who just for the official record right now is blaming his staff member for this incident

In U.S. Senate news we have Senator Rand Paul introducing a bill to give money to hurricane victims in the United States instead of foreign dictators via foreign aid. This bill has been completely blocked by the Senate. He has brought up a very important point including examples of what we spend on foreign aid. 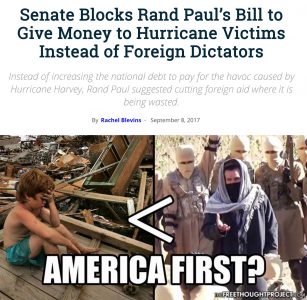 We spent a hundred billion dollars building roads in Afghanistan. Then more money blowing up roads in Afghanistan. We build schools then we blow them up again.  Then we spend more money rebuilding all of them.  Sometimes we blow them up, sometimes someone else blows them up. Then we always go back and rebuild them. What about rebuilding our country. Sounds like a practical idea but of course, the bill is blocked.

Rand Paul is also waging another war against endless wars. 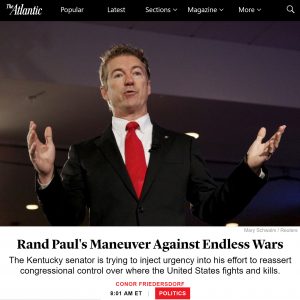 He’s trying to repeal the 16-year-old Authorization for the use of Military Force (AUMF) which passed shortly after 9/11. It has allowed U.S. Presidents to declare war without Congressional approval. It has permitted the bombing of several countries including Somalia, Syria, and Yemen. 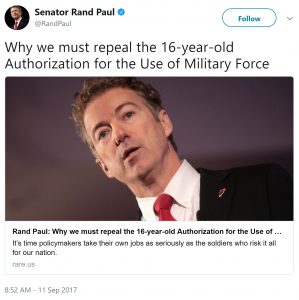 It also allowed the legal justification for the U.S. President to assassinate a U.S. citizen. It has been used to launch 37 military interventions in 14 different countries. Rand Paul is forcing a debate on this crucial issue almost standing alone. It would have passed if it wasn’t for his protest. He is bringing up vital points like the fact that there’s hypocrisy on both sides here. The anti-war left is no longer demanding the end of wars.

If you still believe in the political system, he has vowed to continue this protest. Most interestingly the only significant press he’s getting from this protest is from the online community. The mainstream media, of course, remains silent. 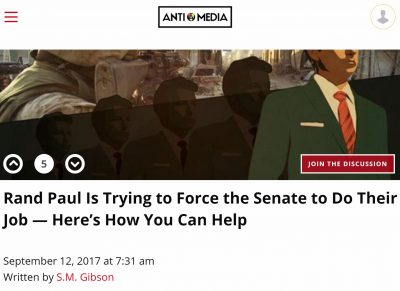 This is an important issue to me because if it weren’t for the AUMF, the president wouldn’t be able to bomb and kill anyone he wants at any time without congressional approval.

This law that Rand Paul wants to repeal has changed the landscape of not only Presidential powers but shaped international world events. This has been going on since 9/11 when Ron Paul former Congressman and Presidential candidate pointed out that 9/11 was used as a justification for passing the Patriot Act. He noted that the extensive bill was written many years before the attacks occurred. 9/11 just provided an opportunity to implement the police state.

That one event 9/11 introduced the AUMF and the Patriot Act. This started the current horrible foreign policy that still persists.

Many scholars, whistleblowers, professors, and experts say the government story about 9/11 does not add up. They say that it is bankrupting this country. Today almost every penny of our income tax goes to supposed defense spending. Over eighty percent of the money you give to the U.S. federal government goes directly towards the war industry and the security industry. They are setting up a surveillance state that is being turned and used against you the American citizen. As Edward Snowden even said don’t fear Trump, be afraid of the surveillance state. 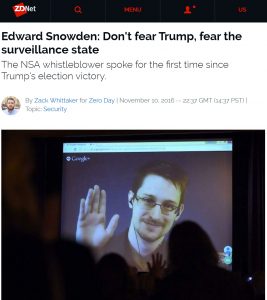 With all of that happening the United States federal debt has just surpassed 20 trillion dollars. In just one day the debt jumped over 317 billion dollars after President Trump signed a new spending and debt limit deal.  This will keep the government afloat until December. 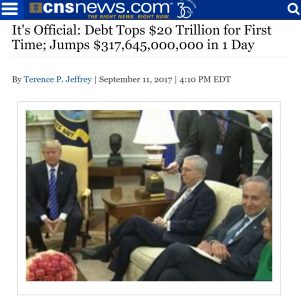 We are being bankrupted and are robbing our children’s future. We will be in servitude because of this debt all because of these meaningless wars that have been raging on for over 16 years now. Which is what the majority of our taxes are spent on. Yet still put us into bigger deficit while the United States cozies up to despotic nations. Nations like Saudi Arabia and Israel where we all commit horrible foreign policy decisions together. 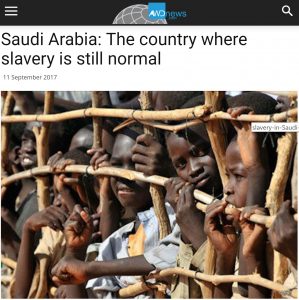 The same Saudi Arabia that appears complicit and implicated with 9/11 along with American intelligence and Israeli intelligence. We’ve been telling you about this unholy alliance between Israel, Saudi Arabia, and the United States for a very long time.

It’s been pretty much-made official with this latest breaking news of the Saudi Crown Prince having a secret visit to Israel. This in spite fo the fact that Saudi Arabia officially does not recognize the Jewish state.

The two countries supposedly do not have any diplomatic relations. This is not a surprise for me because for years now we’ve been documenting and telling you how Saudi Arabia, Israel, and the U.S. have not only had a common enemy with Iran but actively finance rebel groups.  With the purpose of getting rid of the Iranian linked Syrian government and Bashar al-Assad.

These nations supported the rebel groups inside of Syria knowingly. They knew they were creating radical Islamic terrorists and helped the rise of al-Nusra and ISIS. All for their greater geopolitical goal of isolating Iran. These three countries see as Iran and Syria as their common enemy. We’ve been telling you this for some years now. We’ve been accused of being fake news and conspiracy theorists, but now we’re being vindicated. Recently a top Israeli general just came out and admitted the greater truth behind Israel wanting a war with Iran. A general tasked with writing his country’s defense policy has admitted that Israel cannot take on Iran’s military alone if that day ever comes. He admitted for Israel that terror groups like ISIS continue to be a minimal threat and instead Israel’s main focus tends to remain enveloped in an obsession with Iran. 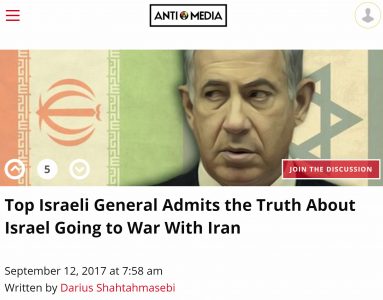 This led up to the events that we were talking about on this YouTube channel with Israeli Prime Minister meeting with Russian President Vladimir Putin. 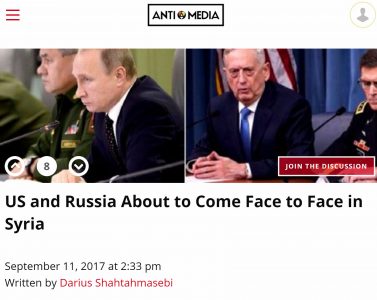 When those talks failed, Donald Trump’s sent Jared Kushner to Israel. We told you to look out for a very strong Israeli move. Israel went out and attacked Syrian government forces, and now they’re colluding with Saudi Arabia even on a bigger level over the future of Syria. A Syria which is strongly influenced by Iran, China and Russia. That’s why this Israeli general said: “we can achieve a decisive victory over Hezbollah, and we don’t need help from a single American soldier. However, we cannot fight Iran alone.” He also said, “I consider future cooperation with the U.S. much more important than anything we’ve had in the past.”

That is why we’re about to see the United States and Russia come face-to-face in Syria. That is why US President Donald Trump has stated that the US will declare Iran non-compliant with its nuclear deal. Even though the nuclear watchdog chief even stated that Iran is playing by the rules. We are going to be keeping a very close eye on this situation on this independent news channel. 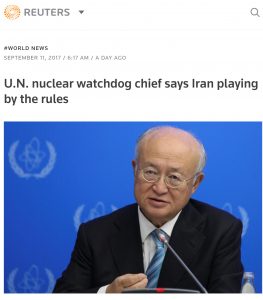 In other potentially disastrous war news, more sanctions were passed on North Korea. This has caused them to down on threats against the United States.

There are also massive demonstrations happening in Spain right now. Hundreds of thousands of people marching in the streets for a Catalan national day. The people of Catalonia are calling for a break from the Spanish government.

The Catalonians are declaring their desire to vote for independence on October 1st, 2017. This is an event which I’m personally thinking attending myself and covering from the ground.

If you’re interested in that, let me know. That is the news for today. I hope you guys enjoyed this broadcast if you found it informative please share it with your friends and family members.

Don’t forget to vote with your dollar. The only thing keeping this independent nonpartisan media organization working is you. Through your help and your donations. Visit wearechange.org/donate

Thank you so much for allowing me to do this job for you. I love you guys very much stay tuned for more content here on WeAreChange.