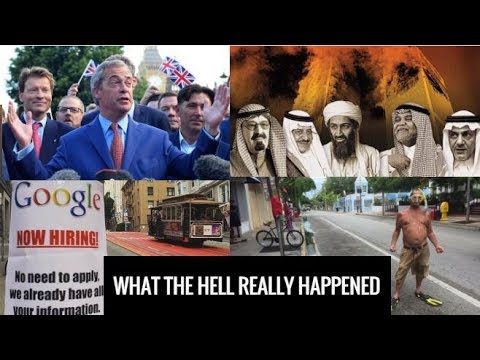 Welcome back beautiful and amazing human beings. Today is Sunday, September 10th, 2017 in this video we discuss the news that happened this week. The news that you should know but don’t because sadly the mainstream media and a significant portion of the alternative media don’t want to touch it. However, we will. We get into how Syria won the war against ISIS which we told you was going to happen a year ago. Israel has started getting in the way which we warned you a few days ago would happen. We will also discuss China’s warns Trump by issuing a dire threat against the United States. We also do more coverage of the U.S. petrodollar hegemony and the world reserve currency collapse.

The above video is also available on Dtube which is a censorship resistant platform all of our recent videos are also available there. It works with the Steemit platform. You can find them here on our Dtube channel.

In more corporatocracy news since “they” don’t like you talking about them. We’ve been screwed for many years by YouTube and Google. What we have been seeing is now happening to Steven Crowder and independent journalist Tim Poole. 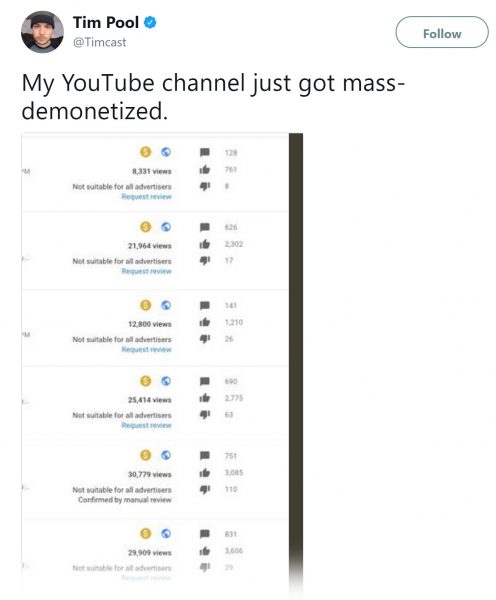 They just had their entire channels demonetized. Welcome to the club guys. A month ago 660 of our videos were mass demonetized. It didn’t seem to matter what the content was although “the algorithm” concentrated on the highest viewed videos and thus the most income earning videos for this channel. This isn’t an

algorithm problem but a blacklist problem by the Google Alphabet YouTube monopolies with whom have a long string of unethical business practices.

So to offset losing our entire income we set up a store on teespring.com/wearechange. We have a new limited edition logo that’s available on sweatshirts, t-shirts, long sleeves, that will only be available until October 2nd. There are only 45 of them left in stock so if you want to pick up some limited edition shirts check it out. 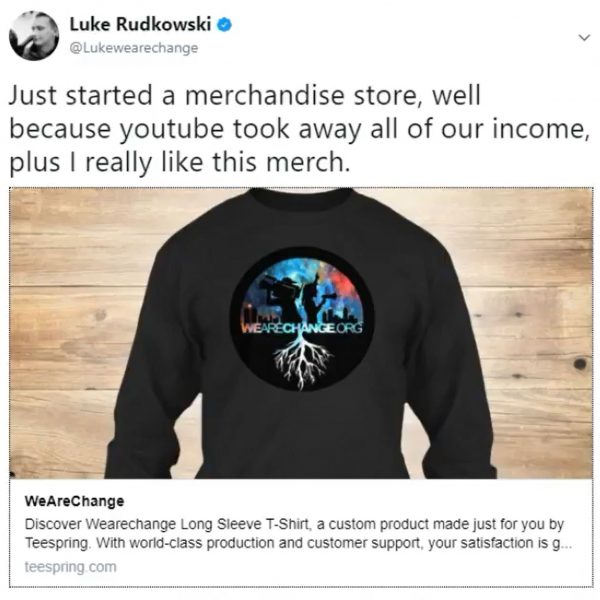 Many people in Florida are bracing for Hurricane Irma which is hitting the coast as I speak. Authorities are getting ready for this storm by warning people not to shoot at the hurricane. 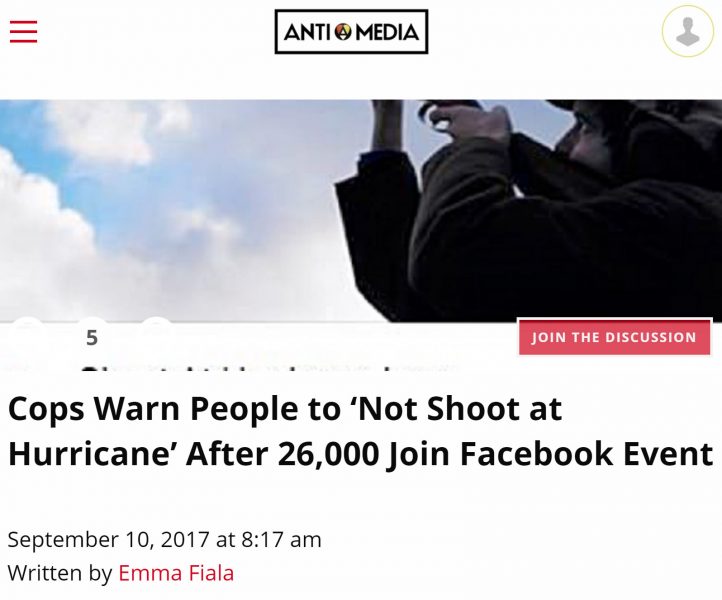 Natural disaster news is great business for the news industry, and we’re seeing a massive oversaturation of coverage detailing disasters. 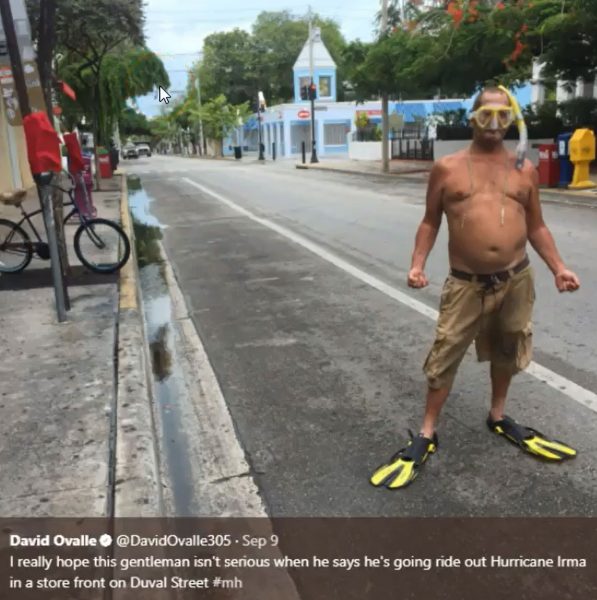 I want to shift our focus onto some of the other things that are happening in this world that you deserve to know.

One of the biggest things that happened this week that are being massively underreported by the mainstream media is the fact that Syria has won the war against ISIS. 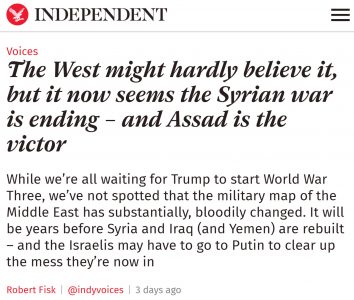 Bashar al-Assad is the clear victor. Something that we’ve been telling you was going to happen for over a year ago now. The Syrian government with an alliance of the Chinese, Russians, Iranians, and Hezbollah have defeated the rebel groups inside of Syria. 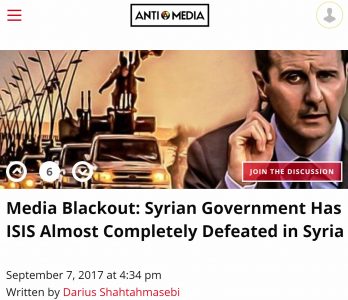 Those rebels that were supported by Israel, Saudi Arabia, and the United States. We’ve been saying that this was going to happen for over a year now on this YouTube channel.

However, there’s still many present dangers brewing in the Middle East that we’ve been discussing this week. With ISIS destroyed in Syria, we are seeing Israel launch airstrikes on the Syrian government and Bashar al-Assad’s forces. 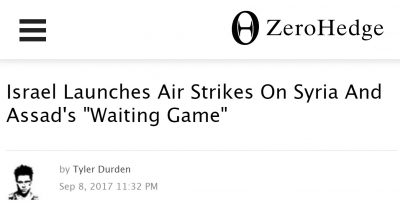 Many people are calling this is an act of desperation. The bigger geopolitical goals of the United States, Saudi Arabia, and Israel have failed in the region. They have been unable to achieve regime change in Syria and now face a more Iranian influence in the Middle East.

Many people are calling this is an act of desperation. The bigger geopolitical goals of the United States, Saudi Arabia, and Israel have failed in the region. They have been unable to achieve regime change in Syria and now face a more Iranian influence in the Middle East.

Israel is doing everything in its power to prevent this including the possibility of starting another war in the region just as this one is ending. Thursday in the early morning Israel attacked a Syrian military base which made the Syrian government responded by warning of serious repercussions. The attack reportedly killed two people.

Most importantly the attack comes just two weeks after Israeli Prime Minister Benjamin Netanyahu met with Vladimir Putin to discuss the future of Syria. According to many accounts, the meeting was very contentious with Israel stating that they would not tolerate an Iranian presence in Syria. The Israelis threatened to assassinate Syrian President Bashar al-Assad by bombing his palace. They also tried to derail the U.S. and Russian brokered de-escalation deal. According to Russian news accounts, the Israeli Prime Minister was frantic, emotional and “at times even close to panic.” This puts the United States in a tough geopolitical situation as US and Syrian forces are about to collide in the same territory where ISIS was just destroyed. 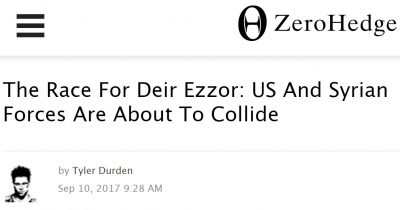 This is all happening on the heels of Israeli troops getting ready and entering the Golan heights region which is a contested territorial land between Israel and Syria. 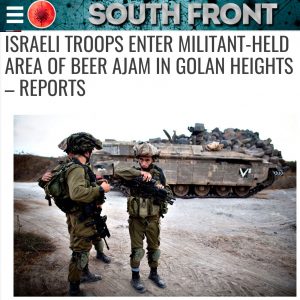 Israel has stated that they did this to prevent a chemical weapons attack by the Syrian government against the civilian population. They said they were, “protecting civilians by launching this preemptive attack” but in reality, there is a bigger geopolitical purpose.

They are motivated to avoid fully losing the war in Syria. We warned you about this on August 25th, 2017 in a video titled “Who is Jared Kushner And Why We Should All Worry.”

We went into great detail about how Jared Kushner was sent to Israel by Donald Trump. His purpose was not to negotiate a peace deal with the Palestinians and Israelis but to negotiate the future fate of Syria. We thought this would lead to further military conflict in the region and that is what we see right now. It wasn’t myself just saying this it was also Syrian girl who released a video on August 27th predicting that this would happen and it did. 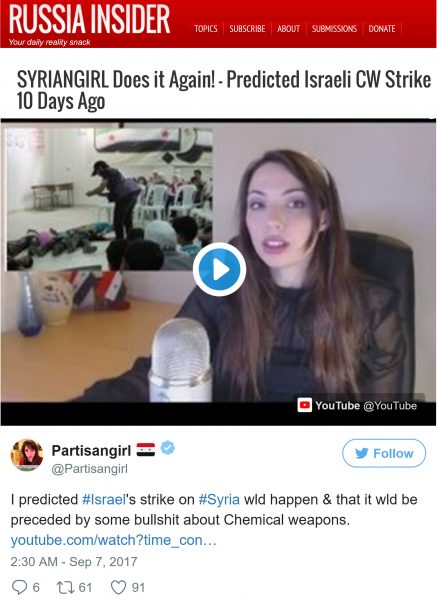 In other disastrous Middle East news, we have the U.S. ally Saudi Arabia which Fox News reported yesterday allegedly funded a dry run for the 9/11 terrorist attacks. 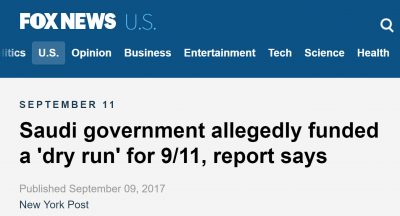 This comes from a new lawsuit against Saudi Arabia. 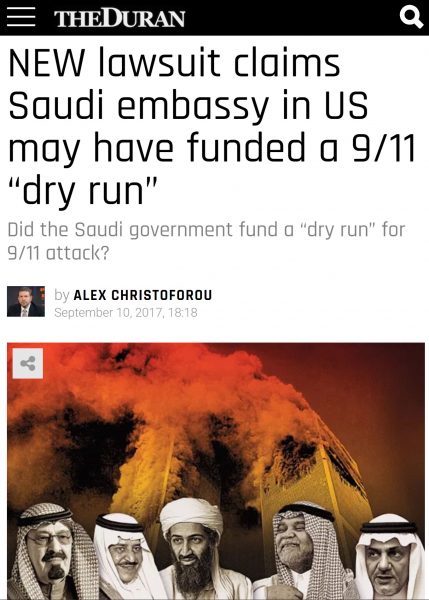 It is not news because in July of 2016 shortly after the 28 pages from the 9/11 report were declassified we learned about this information. We reported it to you even though many the declassified pages were redacted.

The story was downplayed in part because of the coup d’etat that happened in Turkey.

With the 9/11 anniversary happening tomorrow it’s important for everyone to understand the relationships between the intelligence agencies of Israel, the United States and Saudi Arabia and how they work together. There is substantial evidence backing the claim that they either let 9/11 happen or made it happen. I spent years talking about this and investigating. With tomorrow being the anniversary expect more coverage on this issue from us.

I think it should be clear that the only thing allowing the United States to have world hegemony is the war industry. The United States is spending more on defense than the next eight countries combined. 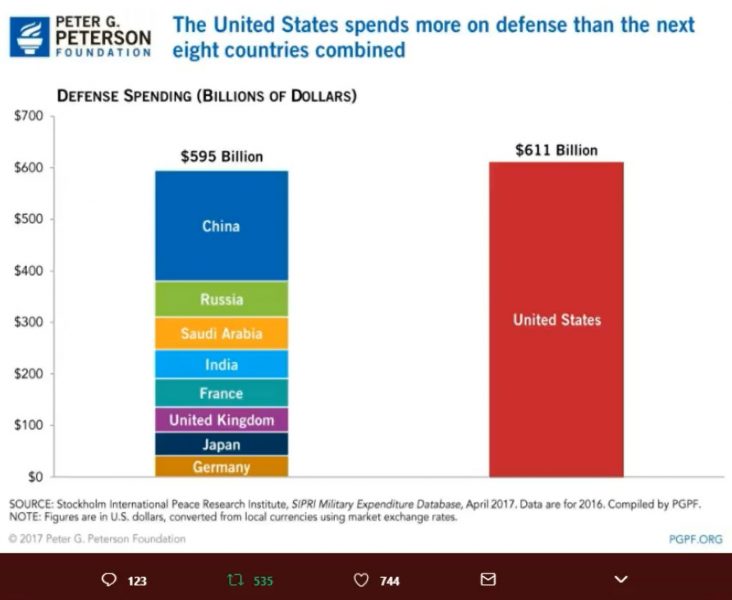 When our only tool is a hammer, everything starts looking like a nail. We’re getting more news this week of the United States sending 3,500 extra troops to Afghanistan. 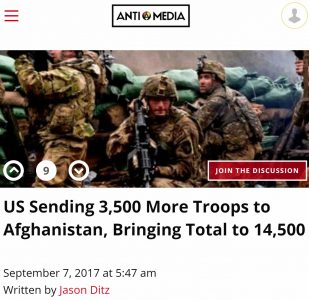 This deployment shows you that it is not a drawdown like other alternative media personalities are trying to tell you. It is a further continuation of the same failed U.S. military foreign policy.

We are also getting more news in which China warns Trump that China will back North Korea if the United States strikes first.

We told you this was happening behind the scenes in a video we did three days ago called “China’s Gold New World Order” six days ago. Also in a video called “The Hidden Truth About North Korea” and in many other videos. The reality that we’ve been warning about has started. It looks like a nuclear North Korea is here to stay which underlines a bigger problem for the United States.

That is the supremacy of the U.S. petrodollar which took another hit this week. Venezuela announced it’s about to ditch the US dollar and start using the currencies of Russia, China, India, and the European Union, any currency except for the US dollar. My response to this is to keep an eye out for another Venezuelan coup. We will continue to observe this here on this YouTube channel. 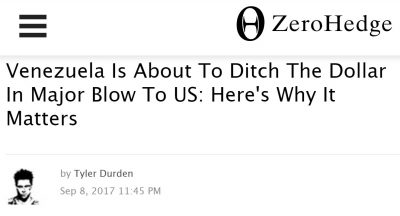 In other horrible corporatocracy news, we have the credit reporting service Equifax which was recently compromised. The information of a hundred and forty-three million U.S. customers was compromised. After discovering that all of their customer’s private information was hacked, they chose to wait on that information. Three Equifax senior executives sold company shares worth almost 1.8 million dollars. 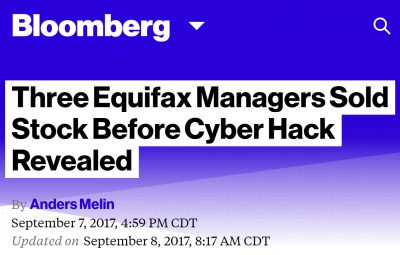 They waited some 41 days with your information compromised for their corporate benefit. Leaving you screwed and in the dark as they rushed to cover their ass-ets. That’s just accepted business practice now and will likely have little consequence for them.

Just like corporate spying on your competition which Uber was caught doing in a federal investigation. They were spying on their competitors Lyft drivers. 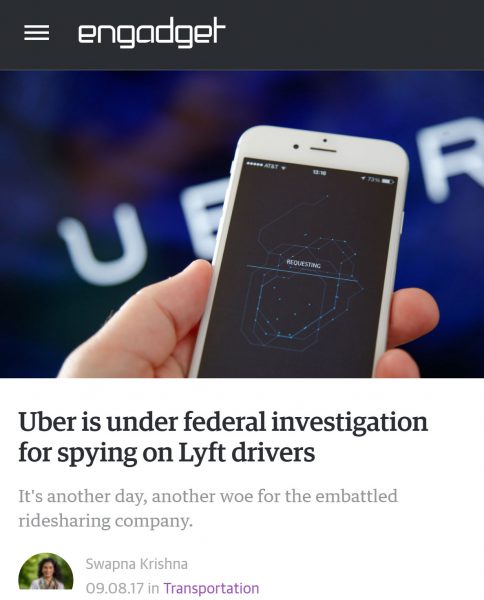 Google which is just becoming more tyrannical by the day. The company that owns YouTube just removed a video of a former British politician Nigel Farage speaking about immigration and Islam. 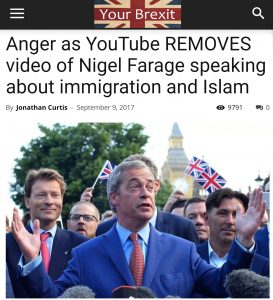 They deleted mainstream political speech. Supposedly because of YouTube’s policy on “hate speech.”

It should be blatantly obvious that there is no longer true freedom of speech, freedom of privacy or any freedom at all from this CIA dominated corporation. An organization that is intentionally becoming integral in our daily lives. It has the most valuable resource of all and that, of course, is your information. I’ve been warning you about this for years now. Until we stop using and empowering these awful monopolies and corporations, they will continue to influence our lives, and we face the repercussions of this.

That is the news for this week. If you enjoyed it or found this information helpful or useful please share it with your friends and family members. Remember together we are all collective consciousness. Let’s rise above all the hate and the fear and the misinformation and malarkey that has no actual impact on our lives. Let’s concentrate on the issues that matter. We should move away from them in a productive way into a world that we all want to see.

I love you guys thank you so much for donating on wearechange.org

Thank you for being there for us while virtually every establishment system is against us and stay tuned for more.