Tens of Thousands March Against Global Elites Ahead of G7 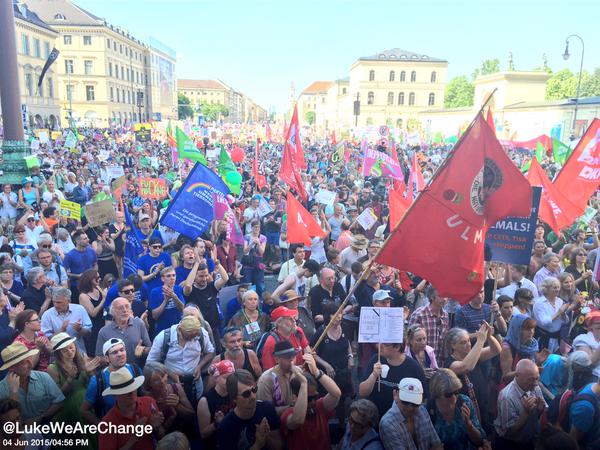 As representatives of some of the most powerful countries in the world prepare to gather for their annual Group of Seven (G7) meeting, this time at a castle in the German town of Elmau, tens of thousands marched through nearby Munich on Thursday to protest the summit’s politics of “neo-liberal economic policies, war and militarization, exploitation, poverty and hunger, environmental degradation, and the closing-off towards refugees.”

Over 34,000 people reportedly turned out for Thursday’s march, with one demonstrator identified as Julia by Euronews declaring “we must not lose hope that one day the world really will be equal, and we will all have the same values.”

The massive protest is just one of many mobilizations, including alternative summits and direct actions, in the lead-up to the gathering of global elites, which will take place June 7 and 8. Government representatives of Britain, Canada, France, Germany, Italy, Japan, and the United States will formally take part.

The annual meeting of global powers has long been the target of demonstrations for global justice.

“The representatives of the richest and most powerful countries in the world lay claim to decide the fate of the entire world, without having any legitimation for this,” reads a statement from Stop G7 Elmau 2015. “Therefore we fight alongside the Blockupy movement, the anti-war movement, the anti-racist movement, the struggle for better living and working conditions, and the protests against environmental degradation.”

This year, protesters are calling particular attention to corporate-friendly trade agreements such as the TransAtlantic Trade and Investment Partnership (TTIP), wars and militarism, inhumane policies towards migrants and refugees, the climate crisis, austerity, and mass surveillance.

The G7 summit has fallen under criticism for what many say are repressive “security” measures, including: border checks, the deployment of nearly 20,000 police, and a wire fence surrounding the Elmau Castle—the luxury resort where the meeting will take place. Some say this heavy militarization has turned the G7 summit location into a “fortress.”