The delta smelt, a California “endangered species” sustained by the state government shows ZERO in recent survey measuring relative abundance. Meanwhile the drought worsens as thousands of acre feet of water are pushed out to the ocean every year to “sustain” the species. 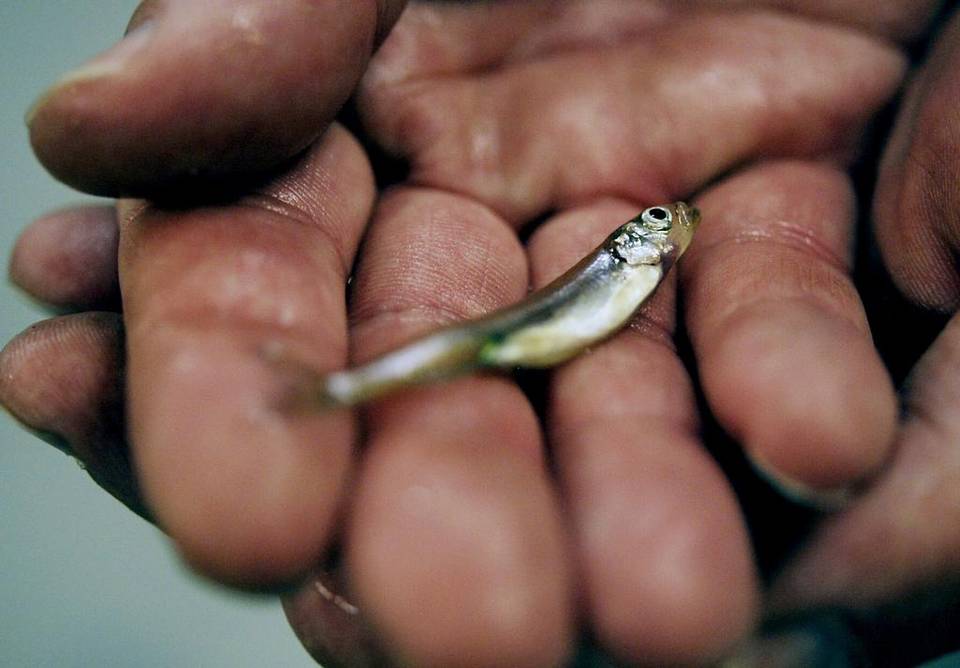 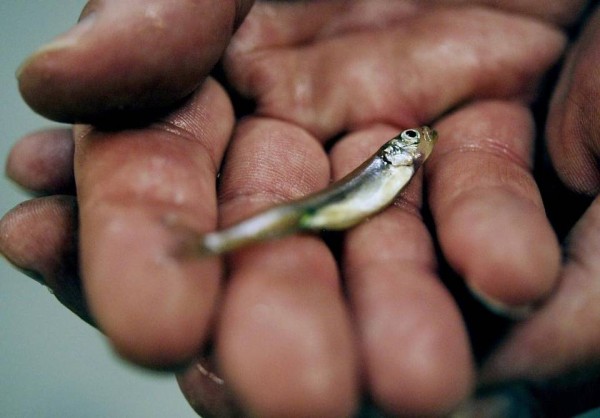 (SacBee)Delta smelt still exist, but are vanishing quickly, with their population index at the lowest it has ever been. | ERIC PAUL ZAMORA Fresno Bee file
BY DALE KASLER
dkasler@sacbee.com
It’s a milestone nobody wanted to see: A key index measuring the “relative abundance” of the troubled Delta smelt registered zero in the latest survey by state scientists, the first time that’s happened since the survey began in 1959.

The California Department of Fish & Wildlife’s index doesn’t mean the tiny fish has gone extinct, biologists said Friday. The agency’s research boats actually came across a handful of smelt in their June surveys. But the numbers were so small that the agency’s official index of the population clocked in at 0.018. That figure was rounded to 0.0.

“We never imagined we would get to zero,” said agency biologist Marty Gingras. “It is the lowest it has ever been.” A year ago in June, the index registered 0.5.

The index represents the latest sign that the Delta smelt, which is listed as “threatened” under the federal Endangered Species Act, is on the verge of extinction. Populations have dwindled in the past three decades, in part because of the invasion of predatory species, and the four-year drought has made things considerably worse.

“It tells us that the fish are not doing well,” said Peter Moyle, a fish biologist at UC Davis, adding that it’s possible the smelt could vanish completely this year. “There’s always hope that a small population could survive, but that’s not a sound strategy.”

Experts say the vanishing smelt – a fish that was once so abundant, it was harvested commercially for human consumption – is further evidence that the overall ecosystem of the Sacramento-San Joaquin Delta is deteriorating. “It’s an indicator of the unsustainability of how we use the water in the Delta,” said biologist Jon Rosenfield of the Bay Institute environmental group in San Francisco.

In a massive environmental report released this week, the state Department of Water Resources cited the smelt’s dwindling population as one argument for building a pair of water tunnels designed to overhaul the Delta’s man-made plumbing system. That system pumps water from Northern California to San Joaquin Valley farmers and an estimated 25 million Southern Californians.

“The ecological problems with the current system could be greatly reduced” if the tunnels get built, DWR officials wrote. The $15 billion plan remains controversial, and some environmentalists say the tunnels actually would harm the estuary by diverting fresh water away from the Delta itself.

There’s little dispute that the drought has added to the pressures on smelt. The water flowing through the Delta has declined in volume while rising in temperature, both of which are bad for the fish. Environmentalists say state regulators have exacerbated the problem by temporarily relaxing minimum water-flow standards in the Delta to keep more water stored in Sacramento Valley reservoirs.

He said the regular smelt surveys enable scientists to see trends in fish numbers, but officials haven’t been able to gauge the actual size of the population. A collaboration between his agency and the U.S. Fish & Wildlife Service is expected to produce a solid estimate of the smelt population, he said. The results are expected later this year.

For now, it’s clear the fish are in trouble.

“There’s every reason to believe it’s not going to be a good year,” Gingras said. “Trend-wise, it’s not good at all.”