The F-35 can’t beat the plane its replacing in a dogfight : report 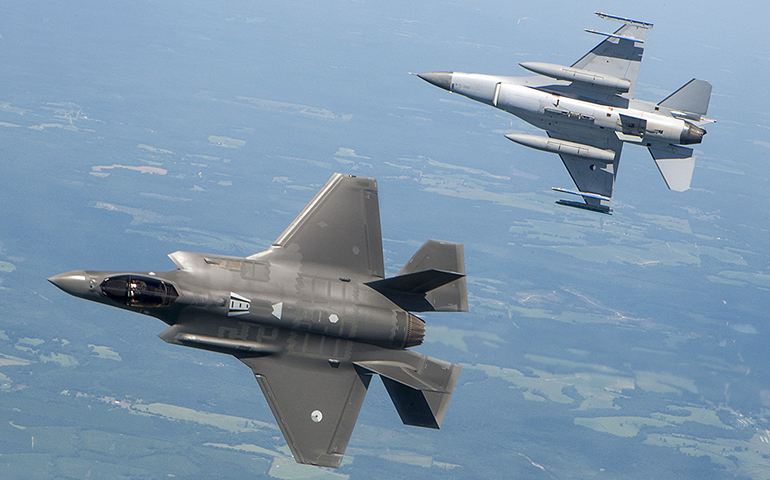 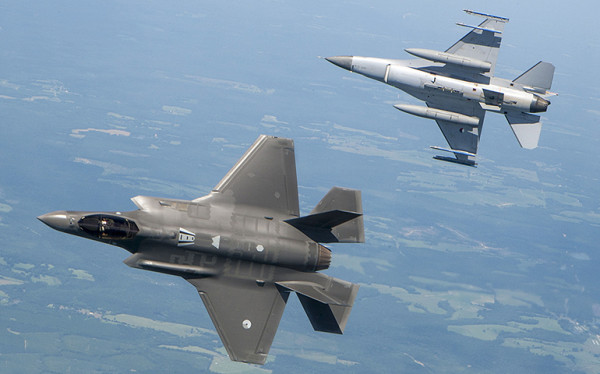 “At one point, the pilot’s helmet was so big he couldn’t even turn his head inside the cockpit.” A photo of that pilot has just been released…

We’ve heard of significant shortcomings before with the fighter jet that’s supposed to be America’s future, but this is just as bad as it gets. The F-35 performed so dismally in a dogfight, that the test pilot remarked that the it had pretty much no place fighting other aircraft within visual range.
F-35 Can’t Carry Its Most Versatile Weapon Until At Least 2022
The short takeoff and vertical landing capable F-35B, which has handicapped the entire Joint Strike …
Read more
And it’s even worse than a mere maneuverability issue. At one point, the pilot’s helmet was so big he couldn’t even turn his head inside the cockpit.

That’s according to a scathing report obtained by our friends over at War Is Boring that details the results of visual range air-to-air engagement tests between an F-35A and an F-16C. The F-35, which the US Air Force, Navy, and Marines are expected to rely upon, in addition to the air arms of militaries across the world for at least the next few decades, was supposed to be better than its F-16 predecessor in all respects.

The F-35’s ability to compete against other fighter aircraft in a close-in dogfight, even against the decades old designs it looks to replace, has always been a contentious issue. Long ago, the F-35’s maneuverability was planned to far exceed that of fourth generation fighters. Over time, those claims eroded to the point where the troubled stealth jet is described as being “about as maneuverable as an F-16.”

The fact that the F-35 can carry its weapons and fuel internally was of course the major deciding factor in being able to make such a claim.

Keep in mind, all of this is anecdotal, but testing reports over almost the last decade have supported the fact that the F-35 was not nearly as nimble as many would like it to be. Still, all claims regarding its performance against other fighters in a dogfight remained largely academic, with only bits of data to compare in a vacuum.

Which is why the candid report described in the War Is Boring article finally gives us a good first hand account as to how capable – or incapable as it may be – the F-35 is in the within-visual-range fight.

Even with the limited F-16 target configuration, the F-35A remained at a distinct energy disadvantage for every engagement.
In dogfighting, energy is everything, and if your enemy has more kinetic and potential energy for maneuvers than you do, then you’re toast.

The report even goes into what is akin to a fairly desperate move usually only used in one-on-one air combat maneuvers, known as a rudder reversal, that the F-35 is apparently decent at performing at slow speeds. The fact that this was even detailed in the report as a useful tactic is telling. In reality, using such maneuvers means you are probably going to die if any other bad guys are in the area as it rapidly depletes the aircraft’s energy state, leaving it vulnerable to attack.

Another area that the test pilot highlights on is the F-35’s abysmal rearward visibility. David Axe from War Is Boring writes:

And to add insult to injury, the JSF flier discovered he couldn’t even comfortably move his head inside the radar-evading jet’s cramped cockpit. “The helmet was too large for the space inside the canopy to adequately see behind the aircraft.” That allowed the F-16 to sneak up on him.
The report goes on to make other telling remarks about the F-35’s air combat maneuvering performance. It should be noted that the aircraft’s flight software can probably still be tweaked to offer a little wider envelope for pilots to traverse during a hard turning dogfight, but seeing as this test occurred this year (almost a decade after the first F-35 flew), the amount of extra agility that can be squeezed out of the F-35 is most likely marginal at this point. Also, the aircraft flown in the test, an F-35A, is the most maneuverable F-35 variant of the lot, being capable of pulling 9g, while the carrier capable F-35C is capable of pulling 7.5g and the short takeoff and vertical landing variant, the F-35B, is only capable of pulling 7g.
7 Things The Marines Have To Do To Make The F-35B Worth The Huge Cost
After years of passing more conventional capabilities by, I think it is time for the Marine Corps,…
Read more
All of this also reminds us of the fact that we cannot believe the information coming from the program itself, which is troubling. Only as the aircraft continues to enter the fleet (which is a whole other ridiculous story) will we begin to hear more honest reviews of its performance, as in the past we have had to rely on unclassified congressional watch dog reports and other unbiased sources to identify trends and key data points.
Major Obvious: F-35 Pilot Says A-10 Will Always Be Better At Air Support
F-35 pilot Major John Wilson said the obvious in an interview with Danish aviation reporters; the…
Read more
Eisenhower, and others to some degree, did warn us gravely to beware of the military-industrial complex, I supposed of which the F-35 is the poster child.
Arthur C Clarke Warned Us About The F-35 And Its Damning Costs
The fantastic and haunting short story “Superiority,” written by the science fiction…
Read more
The fact that the F-35 is maybe not really a good fighter at all is reminiscent of the question that we’ve been asking for years — if you don’t really need competitive maneuverability, than why do we need a fighter at all?