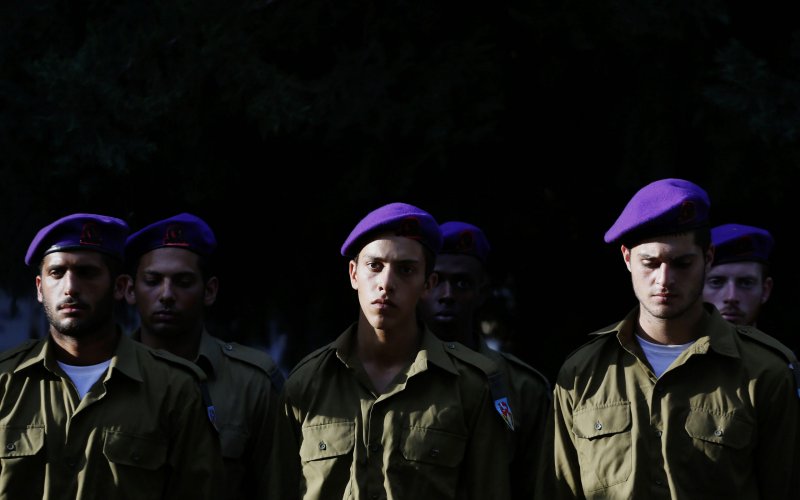 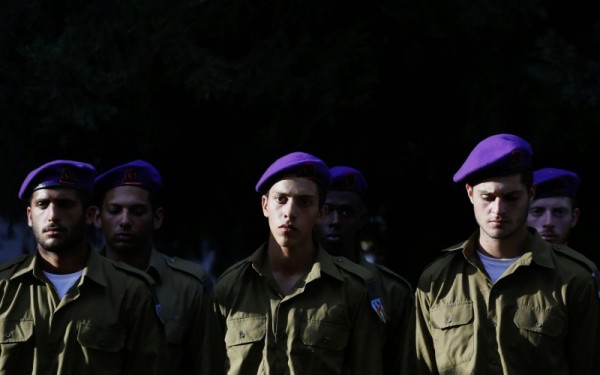 (theDailyBeast) Were Israeli soldiers so haunted by what they saw and did in the last Gaza war that they took their own lives? What role did their zealous commander play?
HAIFA, Israel—More than two months after the end of Israel’s latest offensive in Gaza, Operation Protective Edge, its consequences are still being felt in Israeli society. While the Palestinian territory where the war was waged lies in ruins, for some of the Israelis who fought there the devastation that lingers is in the mind.

In the weeks after Israel and Hamas agreed to an open-ended ceasefire, three Israeli soldiers decided to end their lives with their own weapons. And what was especially striking about their suicides was that all served in the same unit, the Givati Brigade, which had a reputation for its ruthless ferocity, considerable bravery, and the use of Old Testament religiosity to justify the merciless operations of its commander, Colonel Ofer Winter.

The unit spent most of its time in Gaza close to the border with Israel in an area the Israel Defense Forces set out to make a wide buffer zone consuming more than 40 percent of Gaza’s territory. Fighters from Hamas, Islamic Jihad, and other groups did not fall back. Instead they operated out of a vast network of tunnels, and the combat was as ferocious as any the IDF has seen for many years. But the Givati Brigade drew particular attention because of its alleged responsibility for widespread civilian casualties.

On July 21, the Givati was the main infantry force in the assault on Khuzaa, a town in south-central Gaza right on the border with Israel. Human Rights Watch reported afterward, without specifying the unit, that IDF troops there were responsible for “repeated shelling that struck apparent civilian structures, lack of access to necessary medical care, and the threat of attack from Israeli forces as [civilians] tried to leave the area.”

Humanitarian organizations were denied entry to Khuzaa, leaving medics unable to tend the wounded or collect corpses. Residents fortunate enough to have escaped began returning to the destroyed village at the beginning of August.

On Aug. 1, The Daily Beast reported what appeared to have been a summary execution of six men inside an abandoned home full of IDF bullet casings.

In a follow-up report, an Islamic Jihad member under the alias Abu Muhammad, who claimed to have fought in the battle of Khuzaa, alleged that the Palestinians killed were members of his organization, that they had come out of a tunnel to try to ambush IDF soldiers but had been ambushed themselves, were cornered in a nearby house, ran out of ammunition, and then were executed.

He claims that during an early morning operation in Khuzaa, God sent “clouds of glory” to protect his troops.
When asked about the event, and about the possibility that the three soldiers who committed suicide might have been involved, an IDF spokesperson declined to comment and said the matter was still under investigation.

By the time villagers returned to the ruins of Khuzaa in early August, the Givatis had moved south. Second Lieutenant Hadar Goldin of the Givati Brigade was believed to have been captured by Hamas fighters during a battle in Rafah on Aug. 1.

In response, the IDF appears to have initiated what is known as the Hannibal Directive or Protocol, a procedure that aims to free a captured soldier—or risk ending his life along with that of his abductors, if that’s what it takes—in order to avoid protracted negotiations with militants that may free hundreds of Palestinian prisoners. The directive dates back to 1986, was kept secret and reportedly was abolished. But on Aug. 3, the Israeli newspaper Haaretz reported that the Hannibal Directive was still very much in effect:

“On Friday morning, when the IDF still believed that Lt. Hadar Goldin may have been taken alive by Hamas into an attack tunnel beneath Rafah in the southern Gaza Strip, the Hannibal Directive was activated to its most devastating extent yet—including massive artillery bombardments and airstrikes on possible escape routes. At least 40 Palestinians were killed in Rafah.”

Gaza officials place the number of innocent lives lost at 130. The IDF now places the number of dead at 41, of whom 12 are said to have been militants.
“What stands out is what we saw in Khuzaa, including attacks on homes with families in them, and Rafah, with indiscriminate shelling of civilian areas,” a human-rights researcher for Amnesty International, Saleh Hijazi, told The Daily Beast in a telephone interview. “It seems there was a complete disregard for civilian lives and property. It seems like war crimes were committed.”
Ahron Bregman, professor of War Studies at King’s College in London and a former IDF major, told The Daily Beast, “Some of the practices employed by the IDF should be banned altogether—just thrown out of the window. Activating the Hannibal Protocol in Rafah led to the killing of more than 150 innocent people.” In the Aug. 15 edition of Yedioth Ahronoth, the Israeli newspaper with the highest circulation, Winter openly admitted carrying out the protocol. Anyone who abducts an Israeli soldier should know that “he will pay the price,” said Winter. “It was not revenge. They just messed with the wrong division.”

Investigators later determined that Lt. Goldin had been killed in action prior to the bombing.

Before all this carnage, Col. Winter first made headlines over the summer with a letter he penned to his troops, in which he asked for heavenly assistance to “spearhead the fighting [against] the terrorist ‘Gazan’ enemy which abuses, blasphemes, and curses the God of Israel’s [defense] forces.”

This showing of religious fervor was not an isolated incident.

In an interview with the Hebrew press, he praised the miracles he experienced on the battlefield. He claimed that during an early-morning operation in Khuzaa, God sent “clouds of glory” to protect his troops, and they remained unseen until “the houses were blown up… and no longer posed any danger… It [was] like the Lord your God is walking with you to save you.”

At one point, the article on the news website Kooker describes Winter speaking as some of his subordinates come into his office. “My soldiers killed five terrorists out of the tunnel shaft,” he declares without specifying the location in Gaza. He raises his hands to the heaven. “Thank God, thank you God,” he says.

Winter’s strong religious foundation has a specific focus. He studied at the Bnei David yeshiva, built as part of the Eli settlement deep inside the occupied West Bank. Bnei David’s courses prepare its pupils for service in the Israeli military, specializing in leadership roles.

Indeed, settler influence in the Israeli military establishment is growing, thanks in part to the efforts of academies like Bnei David. The yeshiva’s website says that 24 classes have completed coursework (Winter was a graduate of the second) and as a result it has “2,500 enlistees” in the IDF; 50 percent became commissioned officers and “100 have chosen the army as their life-career and are steadily rising up the ranks of command.”

A contributing factor, according to Staff Sergeant J., who served in the Givati Brigade in the middle of the last decade, and does not want to be named, is that secular Israelis are now avoiding the military or declining to continue after mandatory service. “Those who do continue feel a religious and political duty,” he says. This has been discussed as a concern by Israeli academics and analysts for years.

The staff sergeant said that when he was in the Givati Brigade in 2007 or so, it was “openly secular.” He recalls “there was a group who had come from the yeshiva,” but “often they were uncomfortable… they felt sidelined.” As secular Israelis left, however, the vacancies were filled by settlers, he said.

Could any of this, or some of this, or none of this have affected the decision of three Givati soldiers to take their own lives? The Daily Beast reached out to several post-traumatic stress disorder specialists for their analysis.

“It is strange that they hadn’t seen a mental-health counselor,” said Mooli Lahad, an Israeli psychiatrist and psychotrauma specialist with over three decades of experience. He was citing reports that the Givati soldiers hadn’t received treatment. “This isn’t common for the IDF,” he said.

Lahad stressed that suicide usually has to do with pre-existing issues, such as depression, and an accumulation of factors can lead to a sense of hopelessness, which counseling helps to prevent.

“Sometimes, if there is a particularly macho culture, seeking help for depression or PTSD is seen as showing weakness, which is discouraged,” Lahad said. “If there’s a commander who thinks God is whispering in his ear, this can make things even more difficult.”

When asked about the similarities among the suicides—particularly the use of IDF weapons and the short time span—William Nash, a psychiatrist and former U.S. Navy captain who embedded with the 1st Marine Division in Iraq, said it could be attributed to a “copycat” phenomenon which is known to take place when there are outbreaks of multiple suicides.

“However, it doesn’t explain why they chose to do it,” said Nash. “It’s a stretch, but if it’s true that these suicides were motivated by… participation in these alleged atrocities, there must be hundreds more soldiers suffering.”

Col. Winter recently was replaced by Col. Yaron Finkleman, the commander of the Gaza North Brigade, in the latest round of appointments by IDF Chief of Staff Benny Gantz.

According to the news service Ynet, Finkleman’s appointment is out of character for the military: This is the first time in 10 years that the commander of the Givatis doesn’t come from the brigade itself.

When asked previously if these controversies, including the suicides, were a factor in Winter being passed over for promotion, IDF spokesperson Libby Weiss responded that these decisions “come as a result of a thorough process which evaluates various factors.” The events in Gaza had “no bearing” on the decision and “Col. Winter played a crucial role in restoring security to the residents of Israel’s south.”

She went on to say that “preventing suicides during military service and dealing with issues of PTSD are of utmost importance to [us], and a large staff is dedicated to these matters.”

check out the original story here