Jail time for israeli sniper who bragged about shooting children 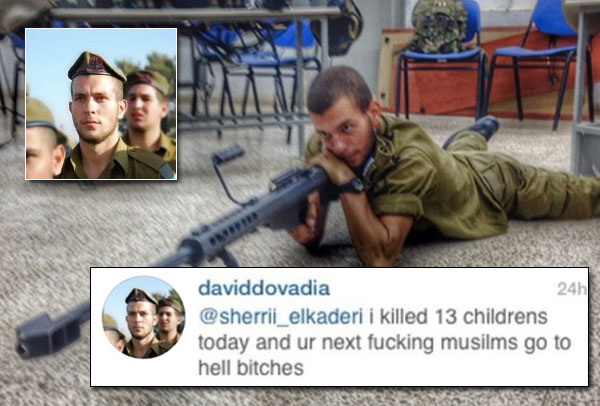 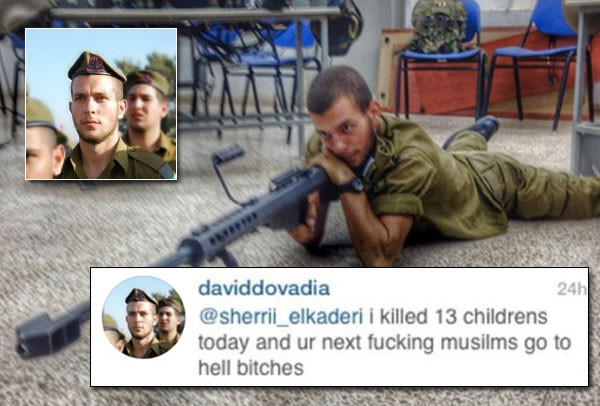 (CounterCurrentNews.com)It’s been several days since we first screen captured the Instagram account of Israel Defense Forces sniper David D. Ovadia, and his cached comments on the account of Palestinian Sherrii ElKaderi.

Many dozens of news sites tripped over themselves to copy and paste our report, even without having access to the sources that brought it to us. Free of the burden of citation, they noted the details we had relayed publicly, but when pressed, they could not elaborate. This led to many to suspect that the post from Ovadia was a hoax, that he had never in fact posted such comments.

For her part, ElKaderi has tirelessly confirmed the post by the IDF soldier, even who boasted of murdering 13 Gazan children in one day. An IDF Combat Engineering Corps Soldier, specifically, Ovadia posed with a Barrett .50 caliber sniper rifle, taunting the Palestinian ElKaderi with the now famous screen captured post.

As we said from the beginning, it was unclear and perhaps unlikely that the Barrett was used in the commission of such crimes, as this weapon is usually reserved for the best of the best marksmen. But Ovadia’s posting of himself with the .50 caliber rifle was obviously meant to be visually intimidating to Palestinians.

As Israeli, Iranian, European and pretty much everyone but U.S. media outlets (save the International Business Times), took our report seriously, the IDF began doing an investigation of their own. Ovadia’s initial plea was that his account had been “hacked”, a claim which many proponents of the IDF incursion into Gaza quickly jumped on, as we had reported the “hacktivist” group “Anonymous” took control of his Instagram account, deleting it entirely after our report first broke.

Ovadia thought that would be the end of it. Within hours, armies of self-described “debunkers” flooded social media, claiming that this was a “hoax”. But the IDF investigators still smelled something funny about Ovadia’s professions of innocence. They pressed on with their questioning, only to catch him in a number of lies. Finally, Ovadia confessed to having made the post, and quickly deleting it once it was clear he was going to get in trouble for his hateful comments.

Now, the IDF has announced that Ovadia is being sentenced to 30 days in jail. They assert that he did not actually shoot 13 children, but was instead using the claim to harass and terrorize Palestinians on social media. As we suspected, Ovadia has not even qualified for the .50 caliber rifle, but had posed with it to look intimidating.

Before finally confessing, Ovadia’s hateful claims of proudly carrying out war crimes led to Anonymous hacking the websites of the Mossad intelligence agency in Israel “for the brave IDF Sniper”, in reference to Ovadia, and following up by taking down the Israeli Ministry of Defense as well, similarly attributing attack to Ovadia’s online claims.

Meanwhile, there are still people who believe they are “debunking” this story, which is now headline news in Israel. On the contrary, however, this story has been investigated, confirmed, and led to Ovadia doing some (though not enough) jail time.