The Real Agenda Behind The Greek Debt Crisis 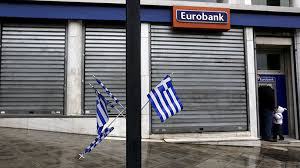 (mindsetsathreat.com)Greece is being treated like a petri dish for neo-liberalist economic policies that, in simple terms, can only be described as a collusion of corporate and banking interest aimed at the takeover of real valuable Greek assets whilst leaving the average Greek person suffocated with debt and pushed into poverty for many generations to come. Creditors are testing the boundaries of a nation that once invented democracy’s tolerance for undemocratic rule from a group of unelected bureaucrats in the E.U and an even more sinister cabal of predatory lenders. The Greek people are clearly more defiant and animated in their outrage than the rest of the so called ‘PIIGS’ (Portugal, Ireland, Italy, Greece, Spain) member states. The Greek riots of 2008, 2010, 2011, the massive 2012 protests, the recent 2015 riots and the simple fact that Greece managed to elect an anti austerity party that then held a referendum on taking further austerity measures and voted no should prove Greece has been the most resistant country in the E.U towards austerity and predatory lending. By a long shot. Mix in the fact that after said vote the Greek PM then took a deal for a loan that was riddled with austerity even though a week before the Greek people voted, in essence, to reject further austerity. This is a recipe for chaos. But that may be exactly what the IMF/ECB/EU want.

The new bailout deal for 7bn euro contains VAT increases and pension cuts. It has opened up negotiations for further bailouts. Although out of 7bn euro 5bn is going to go straight back towards paying arrears to the IMF and ECB. Further negotiations are likely to lead to a massive privatization fund.

Ex Greek finance minister, Yanis Varoufakis, who resigned shortly after the referendum has already stated his opposition to further bailouts and the Syriza party has been re-shuffled to quell the dissent of the more hardline party members.

The truth is Greece is bankrupt. It can never pay it’s debt of 320bn euro. Not under the measures which have been offered and were rejected just to be accepted again a week later. Greece have the choice of leaving the Euro or abandoning all pride and leaving generations to come riddled with debt and austerity, indefinitely. So why is Greece being treated so badly? Why are the creditors refusing to write off any debt considering it’s been well established that Greece can’t payback their debts (debts which were illegally given to the Greek people). It’s not even a matter of want. It’s a matter of impossibility under the conditions the E.U have been demanding. So why would the EU and ECB demand such a ruthless and illogical deal even though the IMF have admitted this deal is not sustainable in a recent IMF report on Greek debt sustainability? It’s partly to do with the fact that real valuable Greek assets are being given away in order to pay off debts but there’s more to it than a group of creditors competing to see who can buy up the most Greek Islands and airports. It’s also about political control.

In an interview for German newspaper Welt Am Sonntag in 2011, German Finance minister Wolfgang Schauble stated the following in reference to the E.U:

Schauble: “We decided to arrive at a political union via an economic and currency union. We had the hope – and we still have it today – that the Euro will gradually bring about political union. But we’re not there yet, and that’s one of the reasons why the markets are distrustful.

Welt am Sontag: “So will the markets now force us into a political union?”

Schauble: “Most member states are not yet fully prepared to accept the necessary constraints on national sovereignty. But trust me the problem can be solved.”

4 years later and Greece is being used to justify those constraints on national sovereignty. An article in the Guardian states that:

German and French politicians are calling for a quantum leap in how the EU’s single currency is run, proposing an embryo eurozone treasury equipped with a eurozone finance chief, single budget, tax-raising powers, pooled debt liabilities, a common monetary fund, and separate organisation and representation within the European parliament.”

And of course the justification- Greece. Greece is looking at some hard times weather they kick the can down the road and pay their debts or refuse and are forced to exit. Syriza may not even be the ones to make that decision. If Syriza capitulate anymore than they already have, Greece is looking a some seriously intense civil unrest. All the while far right wing parties like Golden Dawn are waiting in the wings for an opportunity to seize more power and the chaos that Greece could be looking at would be perfect for such a power grab.

As for Europe, Greece is being used to incite fear into the rest of the member states. That fear is being used to justify more consolidation of power. This is problem, reaction, solution at it’s finest. The E.U is not a ‘failed project’ as many claim but it is doing exactly it was designed to do- consolidate political and financial power and destroy autonomy at every level. Remember that while all this talk of a eurozone finacial chief, single budget and general power grabbing is happening, the E.U and U.S.A are fine tuning their justification for TTIP (Transatlantic Trade and Investment Partnership) an international trade deal that would give corporations the power to take states to court over laws that might hinder their profits.

This is what the E.U was designed for. Putting more and more financial and political power into the hands of fewer and fewer people. But don’t take my word for it. Here’s a quote from economist, Robert Mundell, known as the creator of the Euro:

“(The Euro)It puts monetary policy out of the reach of politicians,” [And] without fiscal policy, the only way nations can keep jobs is by the competitive reduction of rules on business.”

The Euro was designed to bypass national sovereignty as described here by the man who invented it.It’s a neo liberalist technocrat’s wet dream and if the reaction to a euro crisis is directed at the further consolidation of power to those who caused the crisis it’s going to get a whole lot wetter.