Why is There a Hidden Network of Tunnels Underneath of Washington DC ? 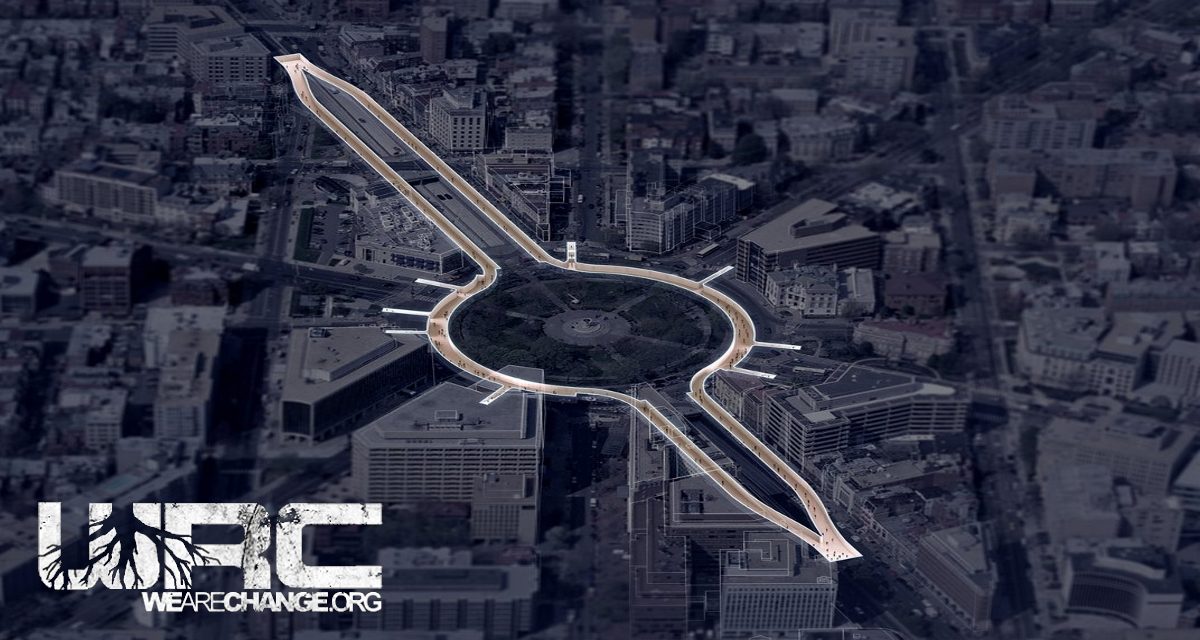 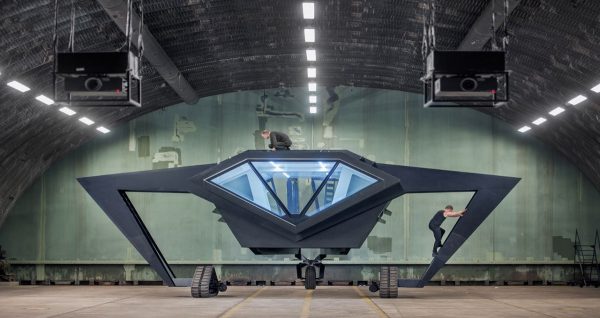 It is well known that Freemasons certainly played a role in the construction of Washington D.C., and the city is full of persisent rumors that the street layout and other buildings are embedded with masonic code. It isn’t surprising that networks of underground tunnels (and even a subway just for those on Capitol Hill) were built beneath the city. More unique than the existence of the tunnels is how they’ve been hidden and if and how they are being used. In Washington D.C., they’re like underground cities, with all the things you would need from the outside world, moved underground. Streets become hallways lined by rows of earth and lights.

In 1924 a curious network of catacombs was discovered in Washington D.C. They were traced to Harrison Dyar, a Smithsonian entomologist who had been industriously digging tunnels in the city for almost two decades.

All of the buildings in the United States Capitol Complex are connected by tunnels and underground walkways, which provide easy passage between legislative office buildings, the Capitol, the Capitol Visitor Center, and the Library of Congress, used in inclement weather. The tunnels connecting office buildings are open to the public, but those connecting to the Capitol require security clearance. Small electric tramways run from the Capitol building to the Russell, Dirksen, and Hart Senate Office Buildings and to the Rayburn House Office Building. The tunnel between the Capitol and the Cannon House Office Building displays winning pieces of artwork from the annual Congressional Art Competition for high school students. Approximately every other Wednesday, a group meets at the Cosi on the corner of R and 20th Street NW and heads down the narrow sidewalk bordering the roadway, which goes under Dupont Circle, to actually  tour what lies below the circle. Architect Julian Hunt leads tour-goers around the cavernous 75,000 square-foot space, explaining its history and discussing its future.

Built after World War II, the Dupont Underground was designated as a bomb shelter. In 1995, it opened as Dupont Down Under, a 12-tenant project that largely consisted of a food court. In September 1996, the city evicted Stephen Simon, and Dupont Down Under was officially deemed a failure. It has been vacant since that time.

The group enters through a small door just below Q Street.  There are tracks in a space about 1,000 feet long and 20-feet wide. They then come back along the tracks to where the underground goes under the Circle itself, and the path begins to curve.
Over the years the space has seen many possible tenants. While some officials in federal government agencies sought access to this secret information, most Americans were left in the dark.

Since the early 1960s, the need for a Deep Underground Command Center (DUCC) had been studied. This Top Secret 1963 memo outlined the requirements for the construction of a DUCC. Because of limits in technology at that time, the project was deferred. Fifty years later, the DUCC is finally becoming a reality.

The new underground command center serves two purposes: 1) To protect key people with sufficient staff and data to render critical decisions and 2) To ensure the survival of the facility to allow dissemination of these decisions. The DUCC can only serve this purpose if the President and his team can secretly relocate there on very short notice.

Unlike the old Presidential Emergency Operations Center (PEOC) which is currently located below the East Wing of the White House, the new secret command center will house its own massive communications data center that interfaces with all military, intelligence, and critical federal agency systems. For security purposes, the exact specifications of the this command bunker are classified. 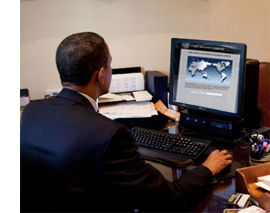 Currently, the President has access to a large suite of Executive Command and Control applications via a PC located in his personal study outside the Oval Office.

Some of these applications include the Cyber Warfare Command and Online Nuclear Launch Codes. For enhanced security, the access point for these important national security applications will eventually be relocated to the new West Wing underground command center.

The White House has developed a comprehensive Continuity of Government Plan to ensure that our nation will continue to function in the event of a catastrophic national emergency. To prepare for this unthinkable event, the new West Wing underground command center will function as an “underground White House”. A tunnel will connect the new executive command center with the PEOC under the East Wing. 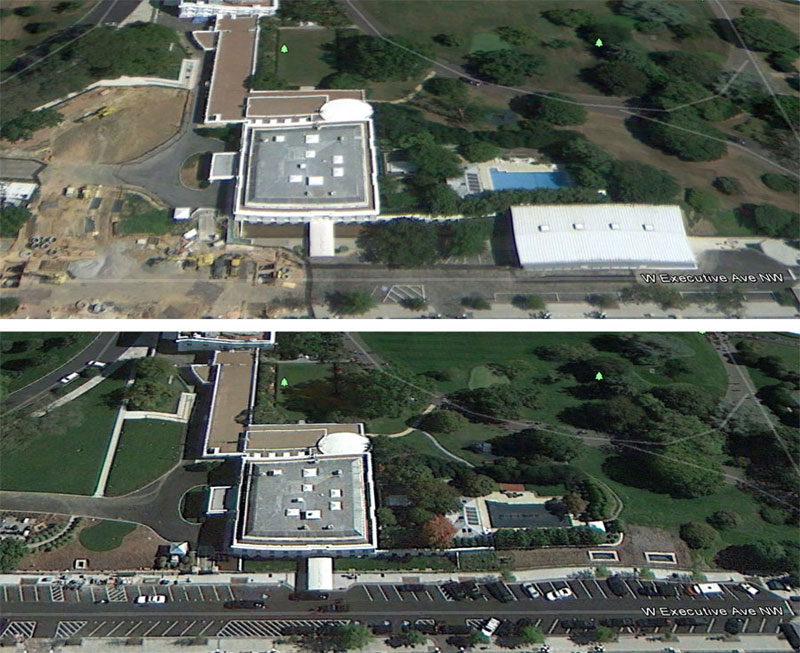 Before and after photos of secret White House construction

The complex logistics of evacuating key executive agencies located in our nation’s capital include a fleet of specialized vans and trucks which can be dispatched on a moment’s notice to secret campgrounds located within the Shenandoah Valley and in nearby federal park lands in Maryland, Virginia, West Virginia, and Pennsylvania containing underground hardened facilities and emergency communication systems.

The US governments official web page for details about this plan: Continuity of Government (COG) .

The White House Tunnel System was designed for just this type of event. 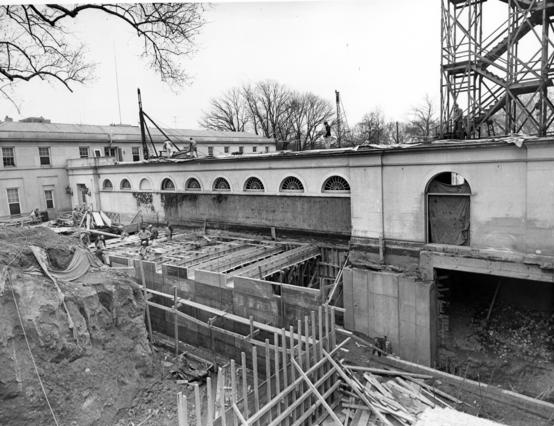 Work first began on the secret White House underground tunnel system back in early 1950 under the Truman administration. The White House was deteriorating and it was determined that massive reconstruction was required.

President Truman relocated to the nearby Blair House for three years while the interior of the White House was completely rebuilt with concrete and steel beams.

It was during this time period that forward-thinking engineers came up with the plan to construct a massive underground secret network of tunnels and bunkers to provide the President and his staff the ability to quickly relocate during an emergency in the dawn of the Cold War era.

The Washington Metro is a subway system that serves the Washington DC area. It “officially” has 106 miles of track serving 86 stations in the District of Columbia, Virginia, and Maryland. Planning for the Metro system began in the 1950s during the height of the cold war. President Eisenhower created a secret rail planning commission that directed the development of a secondary secret underground rail system built alongside the public one.

This secret tunnel system currently connects the White House to the Eisenhower Executive Office Building next door, the New Executive Office Building (NEOB), the bunker under the Blair House, the bunker under the VP Residence at the Naval Observatory, a hotel near the White House, the U.S. Capitol, Joint Base Anacostia-Bolling, the Pentagon, the State Department, and some other federal buildings in between. There is also a secret train that runs between DC’s Union Station and Mt. Weather and is under the protection of the TSA Federal Air Marshals.

Long-term plans call for the expansion of the White House tunnel system to go south past the Pentagon, west past the CIA to Mount Weather, and north past Camp David up to Site R in Pennsylvania. The estimated completion date and exact route of this ambitious tunnel expansion plan remains classified. 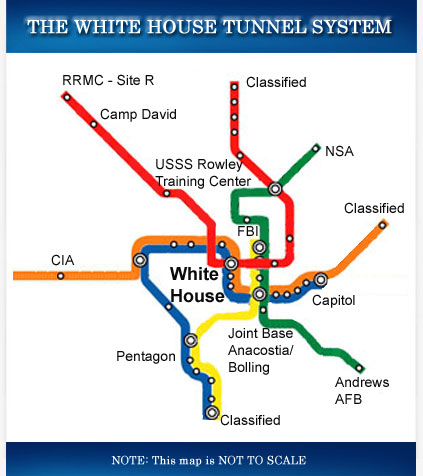 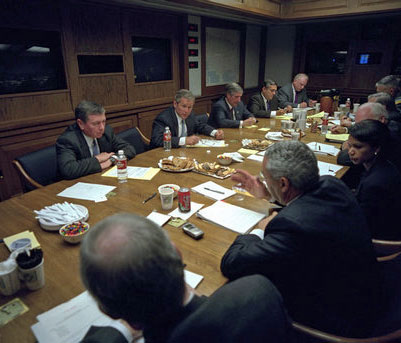 The PEOC was built six stories below ground under the East Wing to provide the President with a secure meeting place in the event of an emergency. Access to the PEOC is by an elevator located behind multiple vault-type doors with biometric access control systems.

Photos of this secret location reportedly  published for the first time following September 11, 2001, when then-President Bush met with his National Security Council in the Presidential Emergency Operations Center. While the exact specification of this emergency Presidential bunker is classified, it is publicized that it was built to withstand a direct nuclear hit.

Meetings in the PEOC and Executive Briefing Room

As part of the Obama Administration’s supposed effort to make this White House the most open and transparent in history, we’ve released over three million White House Visitor Access records including the ones below related to meetings held in the PEOC (click to view the report)

A Year of Secret Searches

In the spirit of openness and transparency, the Obama Administration is shining a light onto this secret underground world by releasing 12 months worth of interesting U.S. Government internet searches to the American People. The data come from the Statcounter analytics program which was utilized to surreptitiously record the U.S. Government’s visits to this website. This information was provided by the United States Domestic Surveillance Directorate under the Obama Administration’s “Relax, it’s Just Metadata (RIJM)” program, which is also known in the Intelligence Community as “Who needs content when you have metadata?

This is just a small number of the underground tunnels of the U.S. Capitol!

There is no telling what these tunnels are for, but there is no denying their existence. Many researchers believe that the NewWorldOrder governments are building intricate underground cities connected by networks of tunnels.

The Hopi Indians of northern Arizona flourished by simply growing corn, beans, and squash with very little rainfall and almost no irrigation. One of the most intriguing of the Hopi legends involves the ant people, an underground race of beings that was crucial to the survival of the Hopi not just once but twice.  In the Hopi history the the first world was  destroyed by fire, and the second was destroyed by ice.  During these two global cataclysms, the most virtuous members of the Hopi tribe were guided by an oddly-shaped cloud during the day and a moving star at night that led them to the sky god Sotuknang, who finally took them underground to live amung Ant People—in Hopi, Anu Sinom . The Ant People then escorted the Hopi into subterranean caves where they found refuge and sustenance.

While we may not all agree on the details of why the government is building these networks of underground bases and complex tunnels, and we might disagree on what the catastrophe will be that they are supposedly prepairing for, the information available on underground facilities, bug-out locations, whole cities and tunnel systems, not only in the US, but across the globe, makes it undeniable that the elite are preparing for an extinction level event, using food, money, gold and other necessities, all paid for by you…. the taxpayer.

One of the foremost investigators on this topic is Richard Sauder. Richard’s favorite research and reading interests are underground and underwater bases and tunnels, electronic mind control, Freedom Technology, human prehistory and remote antiquity, the Kundalini energy and alternative thought patterns. His underground and underwater bases and tunnels research commenced in 1992 and continues to the present day. You can learn more and follow his work by clicking the links below.