Meet The Think Tank Trying Push The U.S. Into War With North Korea 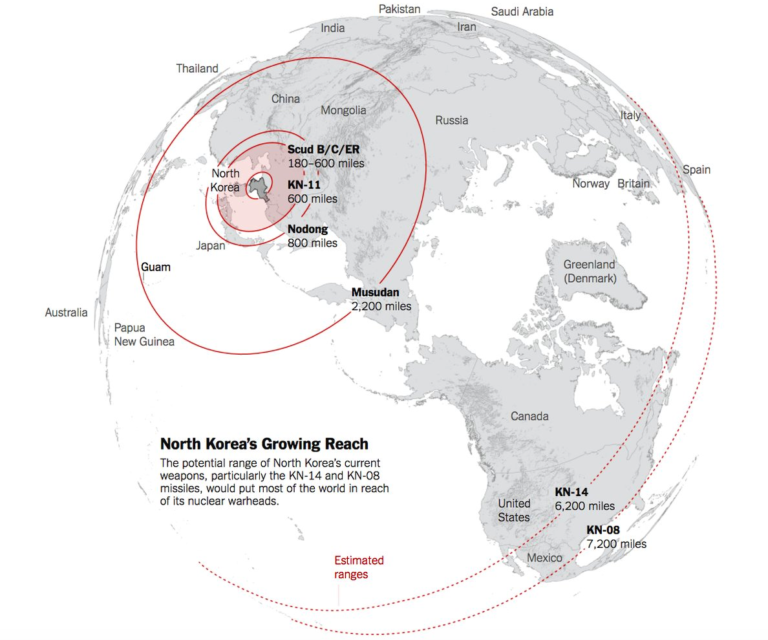 Article via FAIR by Adam Johnson

Tensions between the United States and North Korea are making their way back into the news after a series of missile tests and presidential Twitter threats.

Meanwhile, a conservative think tank—previously thought all but dead—has seen a resurgence in relevancy, thanks to its alignment with Donald Trump.

The result is that the Heritage Foundation has provided much of the narrative backbone for North Korean/US relations in the age of Trump, making the rounds in dozens of media articles and television appearances.

The most prominent of Heritage’s experts is former CIA analyst Bruce Klingner, who plays the part of the Reasonable Hawk, insisting North Korea is “growing [its] nuclear and missile capabilities” and is an “existential threat to South Korea and Japan and will soon be a direct threat to the continental United States,” but opposes preemptive bombing or invasion until the threat is “imminent”—a term he never quite defines (but one, it’s worth noting, the current Secretary of State uses to describe the situation.)

Along with policy analyst Michaela Dodge and director of Heritage’s Asian Studies Center Walter Lohman, Klingner peppers media reports with quotes that  paint North Korea and China as the only bad actors, assert the urgent necessity for US military “leadership” and frequently call for more military spending:

MSNBC (3/19/17) recently had Klingner on for a breezy, uncritical interview. Host Jacob Soboroff teed up softballs about North Korea’s sinister intent and the urgency of US military prominence, using a variation of the “some say” rhetorical trick to smuggle in highly contestable assumptions about North Korea’s motives:

Who are these “lot of people”? What are the motives? Was there a poll of experts on North Korea’s intent? Soboroff doesn’t say.

One key feature of reports on North Korea’s nuclear weapons program is the Hypothetical Scary Nuke Map that shows an entirely hypothetical, not-yet-proven-to-have-been-built intercontinental ballistic missile hitting the US mainland.

One recent example in the New York Times (3/4/17) shows the pitfalls of the Hypothetical Scary Nuke Map: 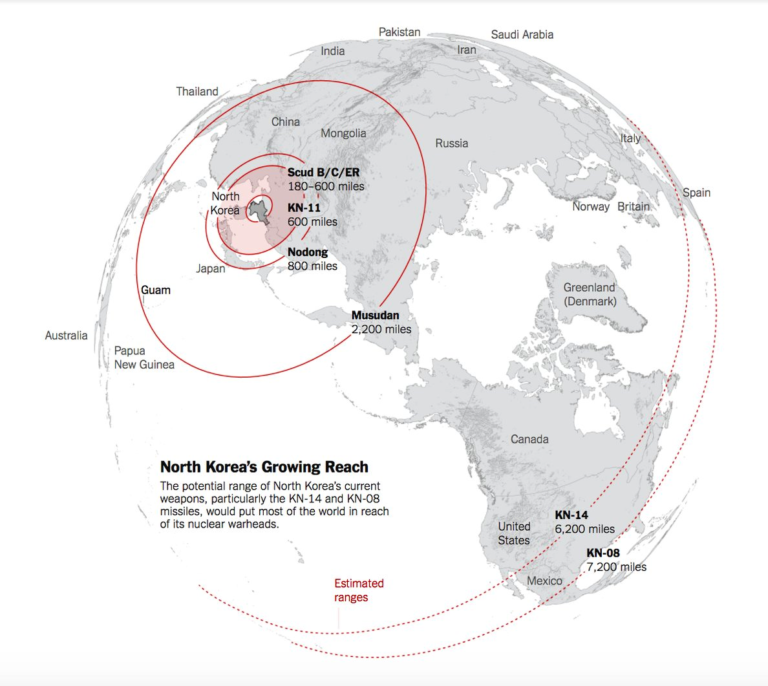 Note the inclusion of two missiles, the KN-14 and KN-08, at the bottom corner covering the United States. These missiles have not been tested by North Korea, thus contradicting the corresponding table’s only criteria of “rockets currently being tested.”

Note the table’s acknowledgement that the two missiles that can purportedly reach the United States do not belong on the table: 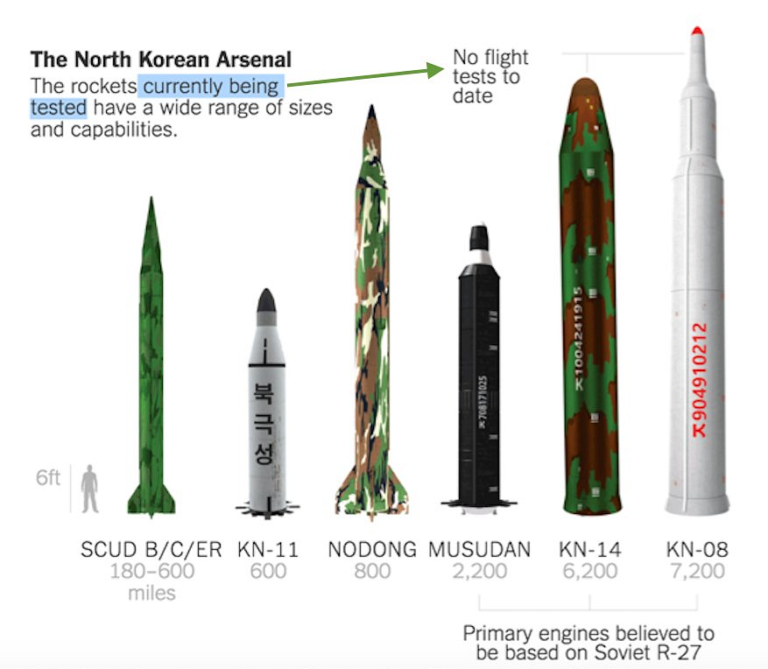 Foreign Policy (3/10/17) also used a similarly misleading map that buried the fact that the range indicating the US could be nuked had not, in fact, been demonstrated: 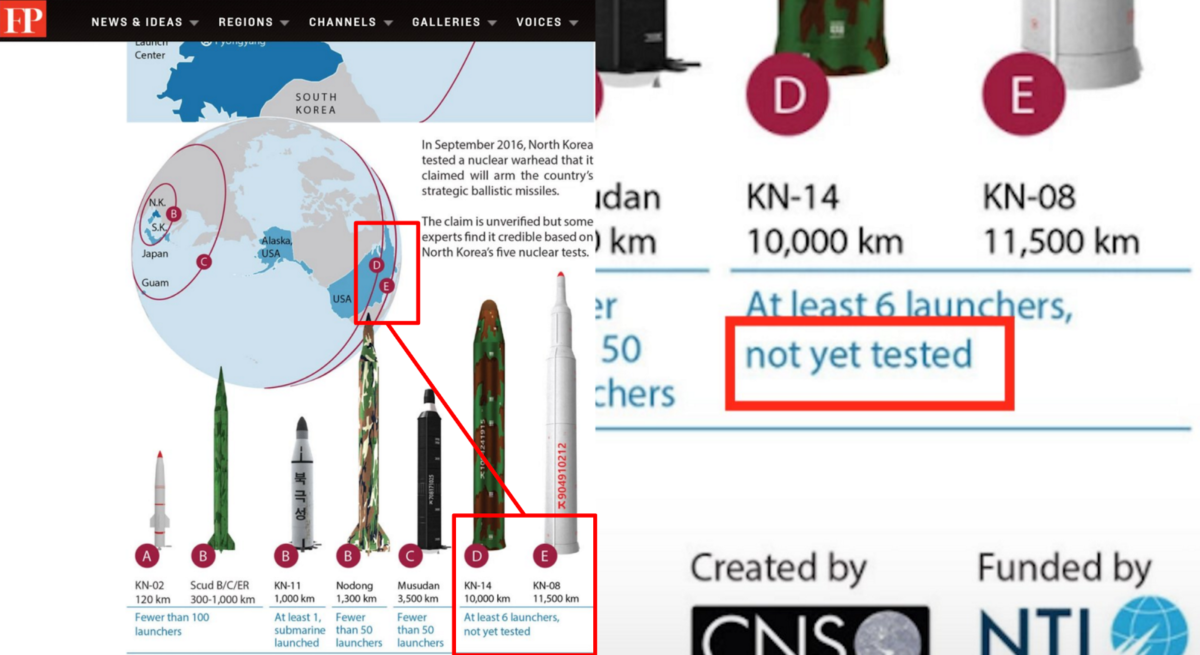 The rockets had to be included in order to get the Big Scary Nuke circle to cover mainland United States, so the Times and Foreign Policy tossed in theoretical missile capacity to help round the threat up.

While the smaller circles on these maps represent missiles that have been tested, that should not mislead readers into thinking that the ranges claimed for the missiles have actually been demonstrated by North Korean tests.

For example, the next-largest circle on these maps—a 2,200-mile radius that encompasses the Philippines, Guam and parts of Thailand—represents North Korea’s Musudan missile.

According to an exhaustive rundown of North Korea’s missile tests in Business Insider (10/29/16):

So far this year, North Korea has conducted eight Musudan missiles tests. All launches except the sixth one on June 22 were considered to be failures.

The missile in the successful test reached 250 miles (Business Insider, 6/21/16), a little more than one-tenth the range claimed for the missile by maps of the North Korean threat. North Korea has conducted one more successful test of the Musudan since then, achieving a range of 310 miles (CNN, 2/13/17). The furthest any missile has gone in tests by North Korea, in reality, is 620 miles, or 998 kilometers (New York Times, 3/5/17).

Obviously, the former map is still a potential danger to the millions who live in its radius, but war narratives are rarely built on making up threats from whole cloth, but rather by exaggerating or hyping them.

North Korea’s potential range is certainly newsworthy, but how many readers skimming these Hypothetical Scary Nuke Maps come away thinking these are tested, actual ranges based on current capacity? The gap between what’s objectively true and what’s possible blurs into a globe-consuming nuclear winter. 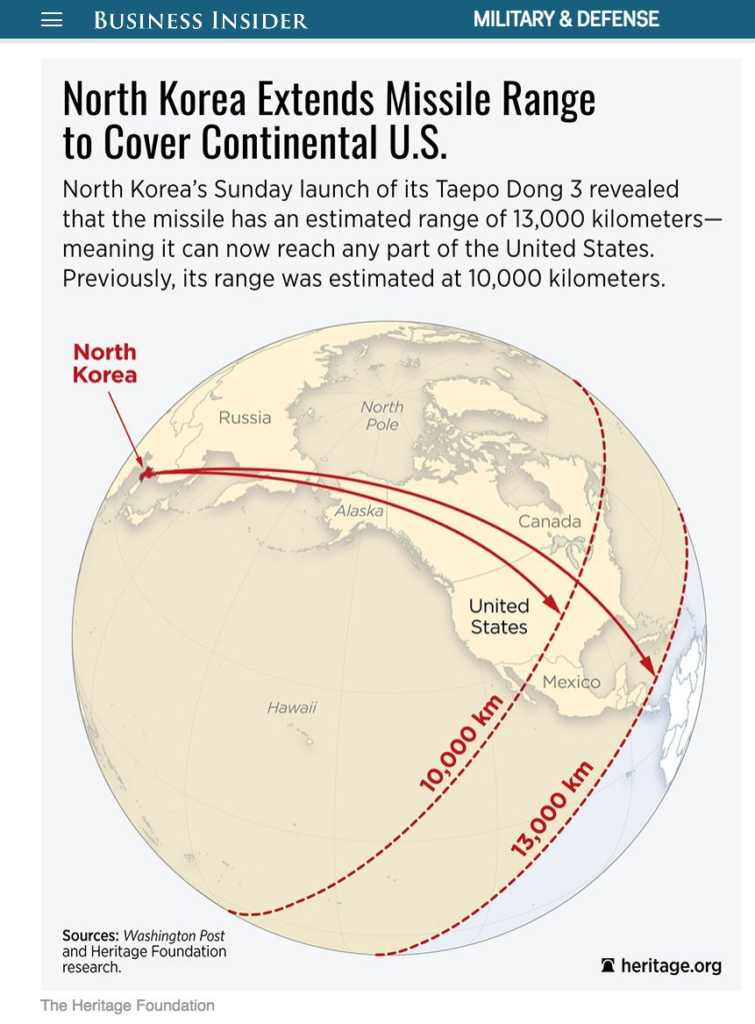 Whether North Korea could reach the mainland US with non-nuclear missiles remains speculation. The Heritage Foundation’s own report on the topic (Daily Signal, 2/9/16) uses the qualifiers “may have” and “could” when describing the alleged 13,000 km range—a figure arrived at by looking at the technical components and abstracting out potential capacity, rather than actual evidence of a missile test. This calculation appears in a single byline-free report from Japanese outlet Mainichi (2/8/16), which doesn’t provide an original source for the number.

Other outlets, such as Business Insider (1/13/17), Time (3/8/17) and Washington Post (2/8/16), report it’s unlikely or unknown whether or not North Korea currently has the capacity to bomb the United States, much less nuke it.

According to Heritage Foundation’s Luke Coffey, the 13,000 km figure—needed to expand the range to include all of mainland United States—comes from the South Korean Defense minister. When asked specifically on what date the minister made this claim, or a link to where the claim appears, Coffey responded: “I’m not your researcher. Do your own research.” The only citation found on Heritage’s website was to the anonymous Mainichi source.

Heritage does not disclose its donors, and has had issues of conflicts in the past. In the late ‘90s, it was criticized for accepting $1 million in funding directly from the South Korean government. A 2015 report in The Intercept (9/15/15) showed the cozy relationship between the foundation and military contractor Lockheed Martin, with Heritage building the requisite marketing collateral to lobby Congress to expand the F-22 program, urging the purchase of 20 planes for resale to Japan, Australia and “possibly South Korea.” Mackenzie Eaglen, the researcher named in the emails, vehemently denies allegations of a quid pro quo.

The Heritage Foundation did not respond to request for comment from FAIR about its funding, and whether or not it currently receives donations from the South Korean government or its associated foundations.

Though there’s been scattered reports of a falling out over the healthcare roll-out, the Heritage Foundation has been incredibly influential in the Trump administration, having written many of its budget-slashing proposals and shaping policy at a high level.

Adam Johnson is a contributing analyst for FAIR.org. You can find him on Twitter at @AdamJohnsonNYC.