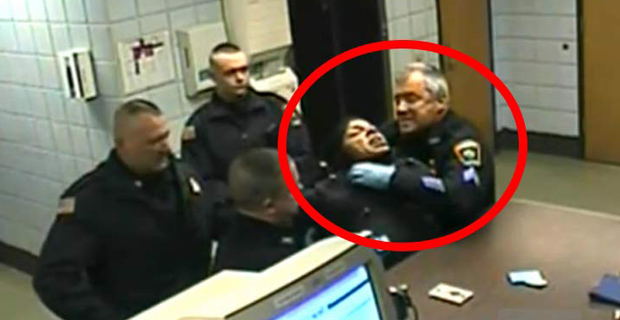 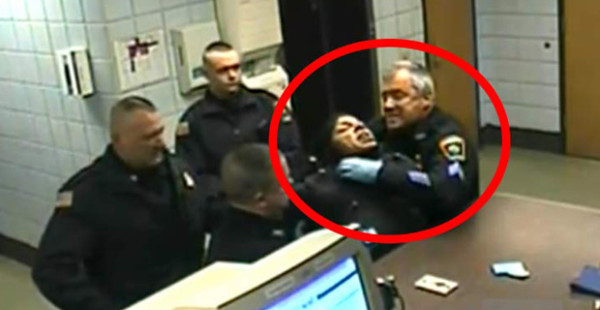 “Shut the f**k up!” yells the Seargent as he attempts to strangle a handcuffed woman into silence

After a new chief took over the Chicopee police department, he released a video showing a former officer attempting to strangle a handcuffed woman.

Maylene Maldonado was being booked for an alleged assault on an officer when the incident took place in February 2013.

The officer who assaulted the handcuffed woman is Sergeant Daniel Major. Maldonado has since named Major in a $1 million federal lawsuit.

Major is no longer employed by the CPD. However, it is unclear as to why Major is no longer with the department. The chief of staff for the mayor’s office, Mary Moge, said she was unsure if Major was fired or resigned.

The Maldonado case has sparked mixed reactions within the Chicopee Police Department’s hierarchy, pitting the current police chief against the former acting chief. Chief William Jebb said Major acted inappropriately and turned over a copy of the booking video to City Hall officials. His predecessor, Thomas Charette, who was acting chief at the time of the incident involving Major and Maldonado, has defended Major’s actions as appropriate in light of the circumstances

An “investigation” that took place after the choking determined that Major did not violate department rules when he attempted to strangle a handcuffed 100 pound woman. Not only did they say he did nothing wrong, but the department went as far as saying that Sgt. Major “acted admirably” by subduing a completely non-violent Maldonado.