Tillerson in Moscow: Is World War III Back on Track? 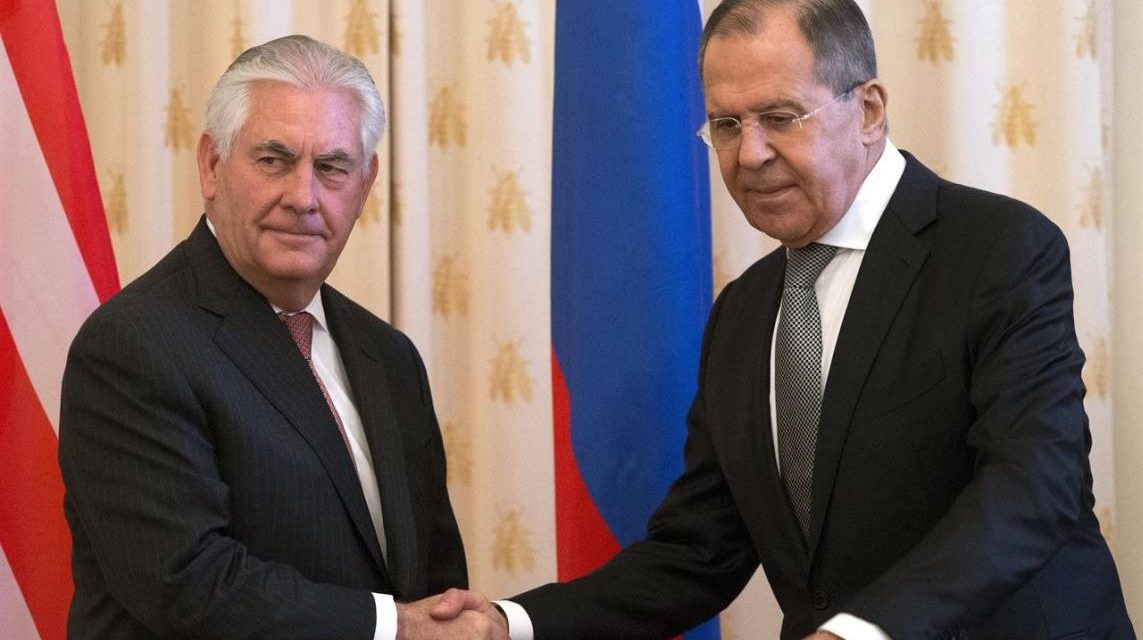 If anyone is worried whether the prospect of a major war, which many of us considered almost inevitable if Hillary Clinton had attained the White House, is back on track, Secretary of State Rex Tillerson’s visit to Moscow was cold comfort. From his remarks together with his counterpart Sergey Lavrov, there is now little reason to expect any improvement in US-Russia ties anytime soon, if ever, and much reason to expect them to get worse – a lot worse.

There has been a great deal of speculation as to why President Donald Trump, who promised a break with the warmongering policies Hillary would have implemented, and which characterized the administrations of Barack Obama, George W. Bush, and Bill Clinton, would have bombed Syria’s Shayrat airbase in retaliation for a supposed chemical weapons (CW) strike without evidence or authorization from either Congress or the UN Security Council.

(I won’t bore anyone familiar with Balkan affairs with the almost certain origin of the gas attack in Idlib. The odds that it was a false flag by the jihadists far, far outweigh any chance of a CW attack by Syrian government forces. To cite the «Markale market massacres» is enough. Ghouta September 2013 wasn’t the first such deception in Syria, and Idlib April 2017 won’t be the last. American media condemning Assad for the CW attack and demanding justice for the victims never mention that the site is held by al-Qaeda and that they themselves have a CW capability. Nor that the jihadists likely knew when and where Syrian planes would be operating, since the Russians would have notified the US under the deconfliction agreement. This is not to rule out the Russian explanation that the release was due to Syrian bombing of the jihadists’ CW cache but I consider the planned provocation more likely based on the timing. Predictably, an amateurish four-page paper issued by the US intelligence community to justify accusations against Assad contained zero evidence.)

Among the reasons speculated for President Trump’s abrupt reversal of his campaign positions:

Trump actually believes Assad was responsible, based on false intelligence fed to him by National Security Adviser H.R. McMaster and others, or on an emotional appeal from his daughter, Ivanka, based on sensational media coverage.

·  Trump doesn’t believe it but someone gave him The Talk: «Do what you’re told, Mr. President, or you and Barron will end up like Jack Kennedy.»

·  Whether or not he believes Assad is to blame for the CW attack, Trump wants to improve ties with the Russians and work together with them to defeat the jihadists in Syria and end the war, and perhaps cut a «grand bargain» that includes Ukraine, but he can’t because of the domestic pressure from the media, the Deep State, almost all of the Democrats, and a lot of Republicans on the evidence-free charge that Moscow tried to skew the 2016 election. (That seems to be partly working, with many formerly harsh critics now praising him. On the other hand, his own base is now split between those cheer any jingoistic use of force and those who see that another optional war will doom his domestic priority to «Make America Great Again!») The one piece of evidence that supports this conjecture is the extremely limited pinprick nature of the US strike on Shayrat.

·  Related to the previous point, given the power of the domestic forces conspiring against him, Trump needed to project strength. (My guess is that Moscow, Beijing, and others will conclude just the opposite: he is weak and not even master in his own house.)

·  Trump is impulsive and lacking in substance, so he goes for the quickest and easiest path to what he perceives to be current advantage. The praise of his former detractors – mainly those who have denigrated and derided him – will prove short-lived. At the earliest opportunity those hailing him now as «presidential» will be the first to call for his head.

·  Trump’s real priority was to impress the Chinese on Korea, with a show of force during President Xi Jinping’s summit in the US. Sending an aircraft carrier group to the waters near Korea with a barrage of bellicose rhetoric that the US will resolve the North Korea issue if China doesn’t reinforces this theory, at least in part. Whether Xi was impressed the way Trump might have intended it is another conjecture.

Whatever the motives, the real question is what comes next. Aside from when another false flag may occur – which Washington in effect invited with threats of a further, more devastating military action against Syria – it matters whether behind closed doors Tillerson’s proposals differed from his public comments. Broadly speaking, there are two possibilities:

1.      Tillerson may have said, in effect, that Trump has laid down a marker, neutralized domestic critics, and shown he’s a big dog – now let’s get down to business. All the accusatory language is just for show, so Trump will have greater flexibility of action. In the weeks prior to the Idlib CW attack, Washington and Moscow had seemed to be coordinating on plans for an offensive against Daesh in Raqqa and airstrikes against al-Qaeda in Idlib. The US and Russia together need to find a way to wrap up this war that defeats the enemy Trump campaigned against: radical Islamic terrorism. It’s up to the Syrian people to work out who their leaders should be. If there are security concerns America’s Israeli, Turkish, and Sunni friends have, let’s find a way to address them within that larger context –

2.      Tillerson’s private comments were consistent with his public statements, amounting to imposing the US Deep State’s agenda on Moscow. That diktat gives priority to blocking some mythical «Shia Crescent» to keep our Sunni «allies» and Israel happy. Assad must go on some specified timetable, though we may grandly allow him so preside over a rump Alawite state in western Syria on a temporary basis; if Assad goes along, we’ll let him retire to Moscow, but if he waits until the next chemical provocation it’s off to The Hague or we’ll kill him ourselves. Syria must be partitioned: we will allow Moscow to participate in a marginal role on the «defeat» of Daesh with a blitzkrieg on Raqqa but then create a «Sunnistan» (or maybe more than one) in eastern Syria, run by some hand-picked jihadi group friendly to the Saudis – basically Daesh with new hats and flag: Islamic State «lite.» To limit Kurdish aspirations Turkey might be awarded a «Turkmen» zone in the new Syria, as well as primacy over a neighboring al-Qaeda-administered area. Also we can anticipate a demand that Russia be prepared to step aside and not oppose an operation for regime change in Tehran.

Even the first message might have been a hard sell given how poisoned the well is and the depth of the abyss of Russian mistrust of the United States. No matter how positive anything Tillerson might have said privately, can anyone in Moscow now believe anything from Washington?

But if the message was the second one, as I believe it was, the Russians would have little choice but to conclude that a major war may be unavoidable and they will plan accordingly. (China would reach the same conclusion.) Plans being made when it was assumed Hillary Clinton was going to win but tentatively mothballed with Trump’s election will be pulled out and updated. Paradoxically, Moscow might still acquiesce to Tillerson’s demands on Syria but only in the spirit of August 1939 – a temporary expedient to buy time and space for what must come.

I of course hope the message was the first but fear it was the second. The white-hot rhetoric coming out of Washington is far in excess of that needed to position US opinion for a reasonable deal with Moscow. Quite to the contrary, it seems calculated to burn any bridges back from anything but regime change and more war. Once again, as has been the case since the Cold War ended in 1991 – but only on the Russian side – US goals look to be geopolitical and ideological, not based on American national interest. The agendas of the Deep State and our regional «allies» will continue to set US policy. Russia must be destroyed as an independent power, right after Syria, Iran, and North Korea but before China. (In a Balkan sideshow, Trump this week signed the NATO accession of Montenegro, effectively completing encirclement of Serbia. At a White House meeting with Jens Stoltenberg, Trump praised NATO.) As was the case in Bosnia, Kosovo, and Libya, and today in Syria, the US is happy to use jihadists as proxies while coldly watching them eliminate centuries-old Christian communities.

In short, the usual. If such a path has been chose by Trump, as appears likely, it may well doom his presidency to failure. But in context, that would be the least of our worries.

I would be very, very glad to be proved wrong.

This article first appeared on Strategic-Culture.org and was authored by James George Jatras.