Top 10 Indications That ISIS is a US/Israeli Creation 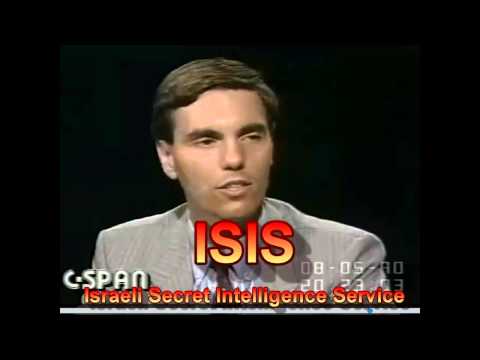 By Makia Freeman Contributing Writer for Wake Up World

ISIS is a US-Israeli creation, a fact as clear as the sky is blue. For many alternative news readers, this may be patently obvious, but this article is written for the large majority of people in the world who still have no idea who is really behind the rise of ISIS.

No matter which name they go by – ISIS, ISIL, IS or Daesh – the group has been deliberately engineered by the US and Israel to achieve certain geopolitical goals. They are a religious, fundamentalist, Sunni terrorist organization created to terrorize and overthrow certain secular or Shiite Arab nations such as Syria and Iraq, but they are not just “Islamic”. They may be Muslims, and they may be advocating an Islamic State, but they are very much working towards the goals of Zionism. It’s amazing how many people still struggle to get that point. We have been inundated with propaganda surrounding the fraudulent war on terror, notably terms such as “Islamic terrorism” and “radical Islam”, but more accurate phrases would be “Zio-Islamic terrorism” and “radical Zio-Islam”. Secret military agencies such as the Mossad and the CIA pull the strings.

Here is a list of the top 10 indications and proofs that ISIS is a US-Israeli creation.

#1: ISIS an Acronym for Mossad

Let’s being with the obvious. ISIS itself is an acronym, not just for Islamic State in Iraq and Syria, but forIsraeli Secret Intelligence Service. This is another way to describe the Mossad, the shady Zionist spy agency whose motto is “by way of deception, thou shalt do war”. In this video (also embedded below), the 2 authors being interviewed (US journalist Dan Raviv and Israeli journalist Yossi Melman) reveal that the acronym ISIS = Mossad.

The U.S. DIA (Defense Intelligence Agency) is 1 of 16 US military intelligence agencies. According to a leaked document obtained by Judicial Watch, the DIA wrote on August 12, 2012 that:

… there is the possibility of establishing a declared or undeclared Salafist Principality in eastern Syria (Hasaka and Der Zor), and this is exactly what the supporting powers to the opposition want, in order to isolate the Syrian regime…

This was written before ISIS came on to the world stage. Clearly ISIS was no random uprising, but rather a carefully groomed and orchestrated ‘controlled opposition’ group.

The “supporting powers to the opposition” referred to are Saudi Arabia, Turkey and the GCC (Gulf Cooperation Council) nations such as Qatar, who are in turn being supported by the US-UK-Israeli axis in their struggle to overthrow Syrian President Bashar Al-Assad. As I outlined in this article Syrian Ground War About to Begin? WW3 Inches Closer, the US is backing the Sunni nations while Russia, China and Iran are backing the Shia nations, so there is the definite potential for this to erupt into World War 3.

Below are screenshots of the actual DIA document: (For more information, please see the article: Reality Check: Proof U.S. Government Wanted ISIS to Emerge in Syria. It includes 7 pages of the above 2012 Pentagon document, which details the U.S. government’s motives in Syria at the time, before the emergence of ISIS.)

It is more than highly strange and suspicious that ISIS never attacks Israel – it is another indication that ISIS is controlled by Israel. If ISIS were a genuine and independent uprising that was not covertly orchestrated by the US and Israel, why would they not try to attack the Zionist regime, which has attacked almost of all of its Muslim neighbors ever since its inception in 1948? Israel has attacked Egypt, Syria and Lebanon, and of course has decimated Palestine. Israel has systemically tried to divide and conquer its Arab neighbors. And Israel has continually complains of Islamic terrorism. Yet, when ISIS comes on the scene as the bloody and barbaric king of Islamic terrorism, it apparently finds no fault with Israel and sees no reason to target a regime which has perpetrated massive injustice against Muslims?

This stretches credibility to a snapping point.

The fact is, ISIS and Israel don’t attack each other – they help each other. Israel was even found to be treating ISIS soldiers and other anti-Assad rebels in its hospitals! Mortal enemies, or the best of friends? The official story is that ISIS stole them from the “Good Terrorists” (Al Nusra), who were originally given their cool wheels by the US government. Which would seem to beg a couple of enquiries. Not least of which is – why are the US giving any terrorists matching fleets of luxury SUVs? And for that matter, how many fleets are we talking about?

So, exactly how many trucks did the US supply? Where are ISIS currently garaging this impressive collection? And why do they all have to be Toyotas? Is it a terrorist thing, or simply a US Government preference? Do Toyota mind the brand-association? Or the fact that so many of the ISIS drive-by photo-ops look like perverted car ads?

Some of these trucks are actually used vehicles that were sent from the US and Canada over to Syria. For instance, this Texan plumber discovered to his horror that his old truck was being used in the war, replete with his business name still on the door! The issue of the Toyotas leads us to the next question about ISIS. Who’s handling their publicity? How have they managed to get so many photos of Toyota truck drive bys? How have they managed to produce slick videos depicting (fake) beheadings? How does a barbaric group of killers, who speak a language very different to English, who espouse fundamentalist religious ideals (such as Sharia law) and often criticize all things Western, manage to master Western social media so well to spread their message, propaganda and threats?

Another key giveaway that ISIS is a US-Israeli creation is that the Israeli group SITE (Search for International Terrorist Entities) are often the first to find and publicly release the video (as their co-founder Rita Katz has let slip on occasion). SITE was involved in the slew of fake green screen ISIS beheadings of 2014.

Speaking of fake beheadhings, why did this fictional Turkish TV drama show a beheading just like that of ISIS?

Although this indication is hard to confirm, there were reports apparently originating from Edward Snowden that the leader of ISIS (Abu Bakr al-Baghdadi) was actually an Israeli Mossad agent by the name of Simon Elliot or Elliot Shimon:

Simon Elliot (Elliot Shimon) aka Al-Baghdadi was born of two Jewish parents and is a Mossad agent. We offer below three translations that want to assert that the Caliph Al-Baghdadi is a full Mossad agent and that he was born Jewish father and mother:

The real name of Abu Bakr al-Baghdadi is “Simon Elliott.” The so-called “Elliot” was recruited by the Israeli Mossad and was trained in espionage and psychological warfare against Arab and Islamic societies. This information was attributed to Edward Snowden …

Julian Assange of Wikileaks did a great job in capturing information about what was happening in Syria years before the “Arab springs” and current war started in 2011. He reveals how William Roebuck, then chargé d’affaires at the US embassy in Damascus, was plotting to destablize the Syrian government. The following quotes from Roebuck’s cables to Washington show how he was outlining the vulnerabilities of Assad:

THE ALLIANCE WITH TEHRAN: Bashar is walking a fine line in his increasingly strong relations with Iran, seeking necessary support while not completely alienating Syria,s moderate Sunni Arab neighbors by being perceived as aiding Persian and fundamentalist Shia interests. Bashar’s decision to not attend the Talabani ) Ahmadinejad summit in Tehran following FM Moallem,s trip to Iraq can be seen as a manifestation of Bashar’s sensitivity to the Arab optic on his Iranian alliance.

PLAY ON SUNNI FEARS OF IRANIAN INFLUENCE: There are fears in Syria that the Iranians are active in both Shia proselytizing and conversion of, mostly poor, Sunnis. Though often exaggerated, such fears reflect an element of the Sunni community in Syria that is increasingly upset by and focused on the spread of Iranian influence in their country through activities ranging from mosque construction to business. Both the local Egyptian and Saudi missions here, (as well as prominent Syrian Sunni religious leaders), are giving increasing attention to the matter and we should coordinate more closely with their governments on ways to better publicize and focus regional attention on the issue. Before Russia militarily entered Syria, the US claims it was “attacking” ISIS, yet Russia was able to do in a few months what the US has been unable to do for years. Why? Is the US military that incompetent, or this is further proof that the US has been funding and supporting ISIS all this time?

There have also been reports that US soldiers were ordered not to fire on ISIS targets, even if they had a clear view of them, as this Free Beacon article reports:

U.S. military pilots who have returned from the fight against the Islamic State in Iraq are confirming that they were blocked from dropping 75 percent of their ordnance on terror targets because they could not get clearance to launch a strike, according to a leading member of Congress.

“We can’t get clearance even when we have a clear target in front of us,” said Royce [US Representative, Ed Royce, chair of the House Foreign Affairs Committee]. “I don’t understand this strategy at all because this is what has allowed ISIS the advantage and ability to recruit.”

Furthermore, why did US State Department spokesman Mark Toner struggle to celebrate the fact that ISIS had lost Palmyra recently?

#10: ISIS is Always the Excuse for Further Intervention

Finally, consider this: why is ISIS always the perfect excuse for further military intervention in Syria? Given the history of foreign meddling in Syria, particularly by the US and Israel in the last 70 years, isn’t it rather convenient that the specter of ISIS is the justification offered for proposed no-fly zones, air strikes and ground troops? How else would the US and Israel conquer the Middle East without their boogeyman ISIS?

Please share this article with those who haven’t yet awoken to the truth about ISIS. Many have already seen through the propaganda. Once enough of us do, the usefulness of this ridiculous, dangerous and vaudevillian terrorist group will expire – and maybe a critical mass of people will be reached, to pull back the curtain and, for once, get a glimpse of the true puppetmasters pulling the strings of war.

Makia Freeman is the editor of The Freedom Articles and senior researcher at Tools For Freedom, writing on many aspects of truth and freedom, from exposing aspects of the global conspiracy to suggesting solutions for how humanity can create a new system of peace and abundance. An avid promoter of freedom, truth and health, his mission is to expose the truth, raise awareness about the conspiracy to enslave mankind and to help create a critical mass of people to stand up against it – and thus restore peace and freedom to the world.