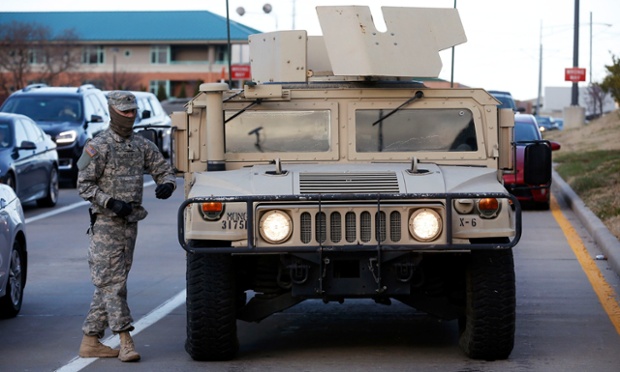 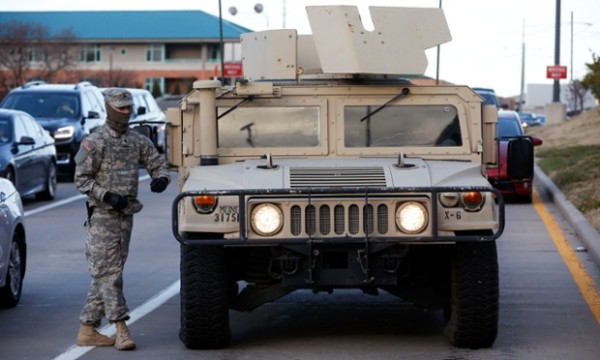 As the Missouri national guard prepared to deploy to the streets of Ferguson last year during protests sparked by the shooting death of Michael Brown, the troops used highly militarised language such as “enemy forces” and “adversaries” to refer to citizen demonstrators.

Documents detailing the military mission divided the crowds that national guards would be likely to encounter into “friendly forces” and “enemy forces” – the latter apparently including “general protesters”.

A briefing for commanders included details of the troops’ intelligence capabilities so that they could “deny adversaries the ability to identify Missouri national guard vulnerabilities”, which the “adversaries” might exploit, “causing embarrassment or harm” to the military force, according to documents obtained in a Freedom of Information Act request by CNN.

In less military-style language, the briefing then goes on to detail how protesters might obtain this intelligence – a list of sources no more technical than public records, social media and listening to conversations “being carried out in public” by civic officials or law enforcement, according to the report.

The Missouri governor, Jay Nixon, deployed the state national guard to Ferguson in August after local police forces caused international uproar by firing teargas on demonstrators while armed with gear that even US military veterans said was better suited for the streets of Afghanistan than an American suburb.

The national guard came back in November in anticipation of a grand jury’s decision not to indict Darren Wilson, the Ferguson police officer who killed the unarmed 18-year-old.

Internal mission briefings and emails from mid-November show that the Missouri national guard was concerned about perception, however, with superiors later telling troops to stop using heavily militarised language to describe protesters.

“We are deliberately constraining mobilization timelines to the last couple days to minimize backlash from calling up the NG [national guard] early,” Colonel David Boyle, army chief of staff at the Missouri national guard, told officers in an 18 November email, according to CNN.

Two days after the guard was deployed, another email from Boyle warned of potential consequences from using language that could be “construed as potentially inflammatory”. A further notification was then sent to commanding officers stating that references to enemy had now been changed to “criminal elements” in guard communications.

He explained that the term “enemy forces” would be better understood as “potential threats”.

He then went on to explain that potential threats during national guard operations could include “inclement weather, heat, failing levees, etc”.

Enemy forces had previously been listed as including, in addition to “general protesters”, the Ku Klux Klan, the RgB Black Rebels and the New Black Panther Party.

Internal memos warned troops to be ready for Molotov cocktails, rocks and other debris to be thrown at police and national guards, protesters using firearms and possible use or arson and destruction of the power grid “through targeted attack”.