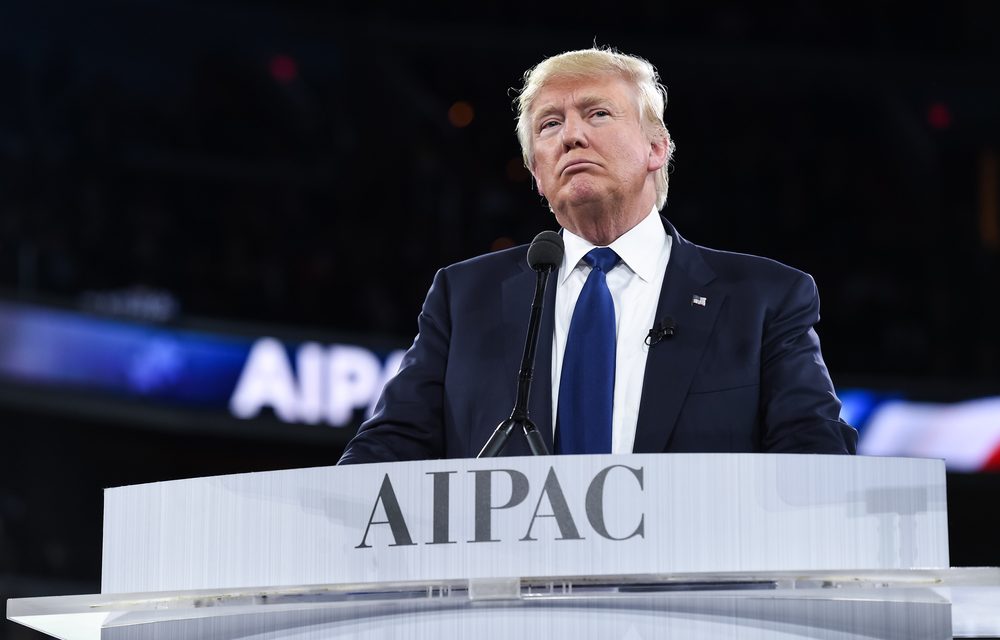 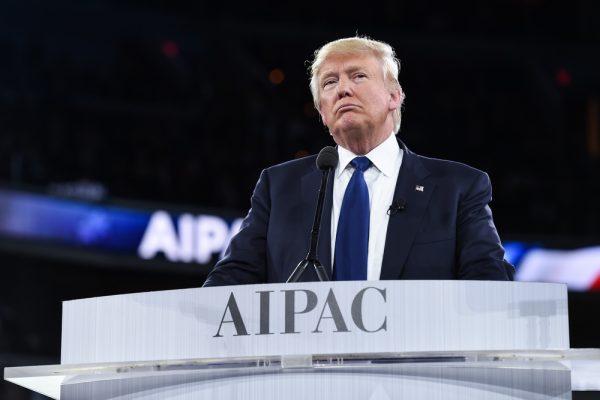 The US is currently holding its presidential primary elections. None of the candidates from either party ever says a critical word about the Jewish state of Israel and only heap praises on to Israel. The only exception is the only Jewish candidate, Bernie Sanders. However, for all practical reasons, Sanders is now out of the race, even though it’s not official as of yet. That leaves 100% of the remaining candidates giving their 100% unquestioning support for the Jewish state of Israel.

For over 30 years US politicians from both parties have been taking BILLIONS of tax dollars from Americans and giving them to the Jewish state, which currently amounts to over $10 million EVERY DAY. (I would think this would be considered a violation of the US Constitution as it is mixing government with religion since once the government takes tax dollars from its citizens, that money is government money which is then given to Israel which is a religious state based on the Hebrew Bible/Old Testament.)

Just recently Republican candidate Donald Trump was on Fox News with Greta Van Susteren. Trump was gushing with praise for Israel and said, “And we’re going to take great care of Israel. We’re going to cherish and protect Israel.” Why would any US politician ever say anything like this? By saying the US under Trump will “cherish and protect Israel” he is saying the oath taken by people who join the US military needs to be amended and instead of swearing to protect the US Constitution from all enemies foreign and domestic, a clause needs to be added “and to protect the Jewish state of Israel.” Also, the Marine Corps Hymn needs to be changed from,

From the Halls of Montezuma
To the shores of Tripoli;
We fight our country’s battles
In the air, on land, and sea
to,

From the Halls of Montezuma
To the shires of Tripoli;
We fight our country’s and Israel’s battles
In the air, on land, and sea
(It’s interesting that a definition and example of the word “cherish” mentions loving your native land, not a foreign nation. The definition reads, “to hold or treat as dear; feel love for: to cherish one’s native land.”

Hillary Clinton also wants to continue the blind and unquestioning US support for Israel. She has been in favor of the unbalanced US Middle East foreign policy for her entire political career. When she was a member of the US Senate, she voted for the US war against Iraq which was fought by the US military and paid for by American tax payers to protect the Jewish state. The neocon movement, which was key in promoting the war, is grounded on the Hebrew Bible/Old Testament. The ancient Jews who wrote the Bible wrote that God said any nation that will not serve Israel “will perish” and “be utterly wasted” (Isaiah 60:12) and that God will set Israel “high above all nations of the earth” (Deuteronomy 28:1) and that all the people of the earth “shall be afraid” of Israel (Deuteronomy 28:10). Jewish superiority and Israel over all runs through the entire Bible. Hillary Clinton believes all of this anti-Gentile nonsense to be true based on her statement in an interview with the New York Times in which she said, “I think the whole Bible is real.”

Compare Trump and Clinton’s desires to use the US and Americans to promote the foreign nation of Israel to the reasoned thinking of the first President of the United States, the Deist George Washington. In his Farewell Address, Washington laid out how the US should interact with other nations. He wrote:

In the execution of such a plan, nothing is more essential than that permanent, inveterate antipathies against particular nations, and passionate attachments for others, should be excluded; and that, in place of them, just and amicable feelings towards all should be cultivated. The nation which indulges towards another a habitual hatred or a habitual fondness is in some degree a slave. It is a slave to its animosity or to its affection, either of which is sufficient to lead it astray from its duty and its interest. Antipathy in one nation against another disposes each more readily to offer insult and injury, to lay hold of slight causes of umbrage, and to be haughty and intractable, when accidental or trifling occasions of dispute occur. Hence, frequent collisions, obstinate, envenomed, and bloody contests. The nation, prompted by ill-will and resentment, sometimes impels to war the government, contrary to the best calculations of policy. The government sometimes participates in the national propensity, and adopts through passion what reason would reject; at other times it makes the animosity of the nation subservient to projects of hostility instigated by pride, ambition, and other sinister and pernicious motives. The peace often, sometimes perhaps the liberty, of nations, has been the victim.
So likewise, a passionate attachment of one nation for another produces a variety of evils. Sympathy for the favorite nation, facilitating the illusion of an imaginary common interest in cases where no real common interest exists, and infusing into one the enmities of the other, betrays the former into a participation in the quarrels and wars of the latter without adequate inducement or justification. It leads also to concessions to the favorite nation of privileges denied to others which is apt doubly to injure the nation making the concessions; by unnecessarily parting with what ought to have been retained, and by exciting jealousy, ill-will, and a disposition to retaliate, in the parties from whom equal privileges are withheld. And it gives to ambitious, corrupted, or deluded citizens (who devote themselves to the favorite nation), facility to betray or sacrifice the interests of their own country, without odium, sometimes even with popularity; gilding, with the appearances of a virtuous sense of obligation, a commendable deference for public opinion, or a laudable zeal for public good, the base or foolish compliances of ambition, corruption, or infatuation.
As avenues to foreign influence in innumerable ways, such attachments are particularly alarming to the truly enlightened and independent patriot. How many opportunities do they afford to tamper with domestic factions, to practice the arts of seduction, to mislead public opinion, to influence or awe the public councils. Such an attachment of a small or weak towards a great and powerful nation dooms the former to be the satellite of the latter.
Against the insidious wiles of foreign influence (I conjure you to believe me, fellow-citizens) the jealousy of a free people ought to be constantly awake, since history and experience prove that foreign influence is one of the most baneful foes of republican government. But that jealousy to be useful must be impartial; else it becomes the instrument of the very influence to be avoided, instead of a defense against it. Excessive partiality for one foreign nation and excessive dislike of another cause those whom they actuate to see danger only on one side, and serve to veil and even second the arts of influence on the other. Real patriots who may resist the intrigues of the favorite are liable to become suspected and odious, while its tools and dupes usurp the applause and confidence of the people, to surrender their interests.
Marine_body_bag_IraqIf we had valued and heeded Washington’s rational ideas for a US foreign policy, we would not be giving away BILLIONS of dollars every year to Israel (that amount will soon increase to a new historical high), we would not have started the Iraq War for Israel’s benefit which would mean, if the commonly held belief is correct, the religious terror organization of Islamic State would not exist today as it was born in Iraq out of al Qaeda (al Qaeda was never able to get into Iraq until after the US politicians started the Iraq War) and US politicians would never promise to “cherish and protect” a foreign nation.

Instead of following the advice of the American Deist George Washington, US politicians are following the advice of the Jewish Christian, Saul/Paul, who wrote in Romans 15:27, “For if the Gentiles have been made partakers of their spiritual things, their duty is also to minister unto them in carnal things.” Zionist Christian con-man and warmonger John Hagee uses this Bible quote to encourage Christians to support Israel.

If Deists DO all they can to promote Deism, the US will get back to its Deistic roots and eventually we’ll weaken the “revealed”/hearsay religions by winning over their members and supporters to Deism. Once this important goal is achieved, the world will be a much happier and more peaceful place!