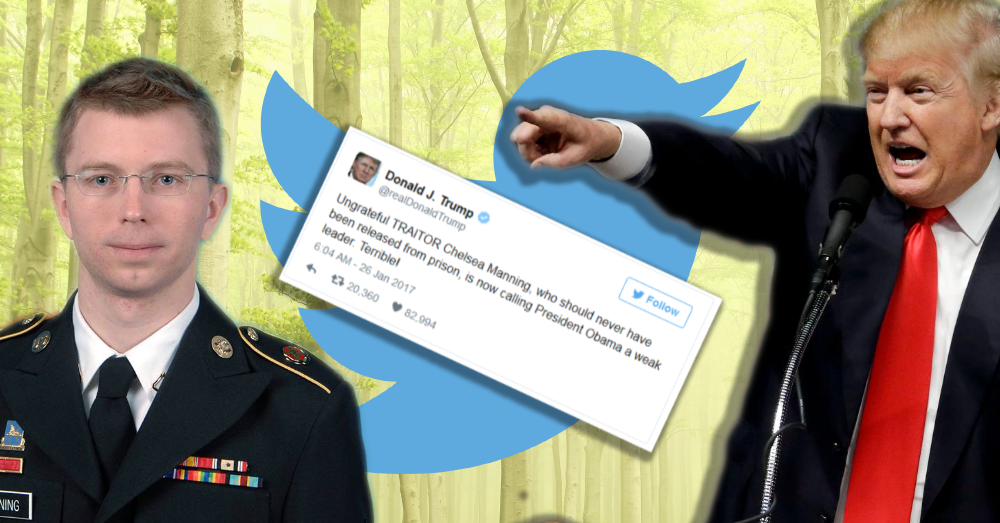 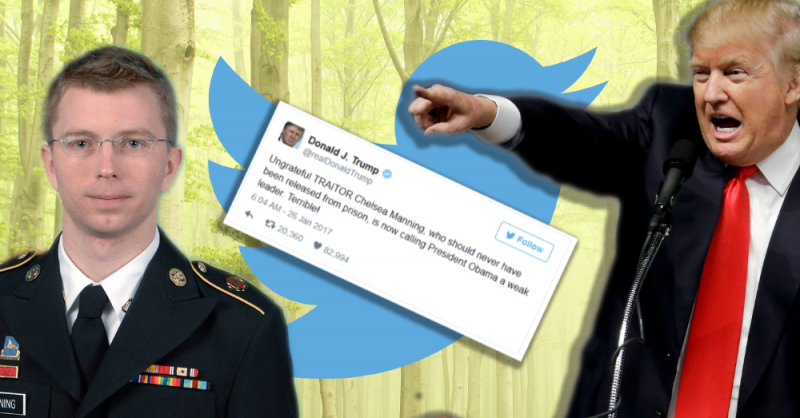 President Trump took to Twitter on Thursday to criticize Chelsea Manning. The whistleblower who Trump referred to as an “ungrateful traitor,” released evidence of egregious human rights violations committed by the U.S. military to WikiLeaks, which helped put the organization on the map.

Ungrateful TRAITOR Chelsea Manning, who should never have been released from prison, is now calling President Obama a weak leader. Terrible!

Trump did not expand upon why he thinks Manning is an “ungrateful traitor,” but he did appear to criticize Manning for “calling President Obama a weak leader,” after having her sentence commuted.

Manning’s whistleblowing—which included releasing a video and numerous U.S. cables to Wikileaks—caused no deaths as a result, yet the video released clearly shows journalists, women and children being mowed down in gunfire, and the person operating the gun laughing over the radio.

Despite this despicable act, those persons involved and the commanding officer who authorized such an attack have never been punished.

With Trump’s tweet claiming that Manning is a traitor, it seems we are in for another four years of intense whistleblower prosecution on the heels of former President Obama, who started the insane crackdown on whistleblowers.

Although, Obama should get credit for the good deed leaving of commuting Manning’s sentence, the person whose life he ruined with his outrageous hunting of whistleblowers.

Trump has also previously called Edward Snowden a traitor. “He would already be on a jet back to the U.S. if I was President,” Trump tweeted in 2013.

All I can say is that if I were President, Snowden would have already been returned to the U.S. (by their fastest jet) and with an apology!

Here are a few good reasons why Obama should have pardoned Chelsea Manning.

While Trump is criticizing Manning now, he has praised WikiLeaks in the past. Throughout his campaign, Trump referenced the documents released by WikiLeaks, and used them as ammo to go after his opponent, Hillary Clinton.

In October, Trump praised WikiLeaks for giving voters a “window” into “the secret corridors of government power.”

However, Trump’s latest comments reveal that he seems to have forgotten that it was the “ungrateful traitor” Chelsea Manning whose actions helped to put WikiLeaks on the map in the first place.