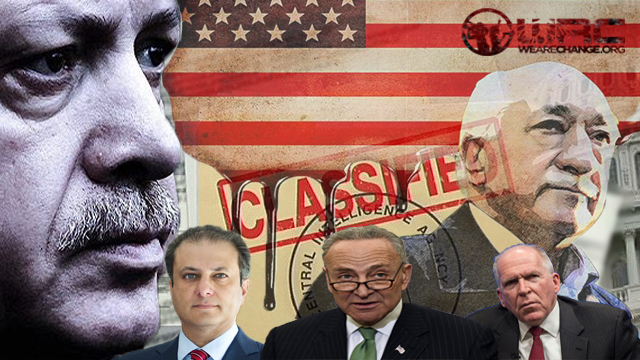 Turkish prosecutors have launched an investigation into 17 U.S officials and academics in connection with the attempted coup of President Recep Tayyip Erdogan’s government last year.

The accused are suspected of being linked to the Fetullah Terrorist Organization (FETO) allegedly run by its exiled Turkish cleric Fetullah Gulen based in Pennsylvania.

In wake of the violent coup last July, tens of thousands of FETO suspects have been arrested, including many in the armed forces, police, judicial system, education and business sector Anadolu Agency reported.

Turkish military drove tanks into the streets and dropped bombs on Istanbul and Ankara from jets before having their coup cut short by Turkish loyalist military.

Although many called the move a political move on part by Ankara, that was issued right before the Turkish referendum to expand Erdogan’s presidential powers.

“To have a big indictment of the former head of the CIA, the former US prosecutor from New York, this is one more little reminder to the public that these nasty foreigners are the ones who organized the coup attempt,” Henri Barkey one of the accused said in an interview with The Independent.

Newsbuds’ former FBI translator, Sibel Edmonds, has for years, accused Fetullah Gulen of trying to undermine Turkey in what she calls Operation Gladio B. Last year Edmonds asked the question, “was what happened in July just a dry run of what’s come in Turkey?”

[RELATED: Behind the CIA’s Failed Coup in Turkey: Was It Only a Dry Run?]

However, several anomalies suggest that the Turkish coup may have potentially been a false flag operation to purge the Turkish military of opposition to Erdogan.

How does such a low ranking military official gain the support of so many soldiers?

Reuters also pointed out that President Erdogan was out on vacation and on his way back when the coup happened and rebel fighter jets had his plane clear in their sights but didn’t fire any shots. Why didn’t they fire any shots if they were rebel jets against Erdogan?

Gulen denied any involvement in the bloody conflict and blamed Erdogan stating the latter that it was a move, “orchestrated to justify a clampdown on civil rights.”

“I condemn in the strongest terms, the attempted military coup in Turkey,” Fetullah Gulen said.

Turkish Secretary of Labor Süleyman Soylu accused the U.S. and CIA of being behind the attempted coup almost immediately after it occurred last year.

BREAKING: Secretary of Labor Süleyman Soylu live on news channel Haberturk: "The US is behind this coup" pic.twitter.com/khqdbUw7re