Pharma-induced apathy Tylenol makes you not give a $h** 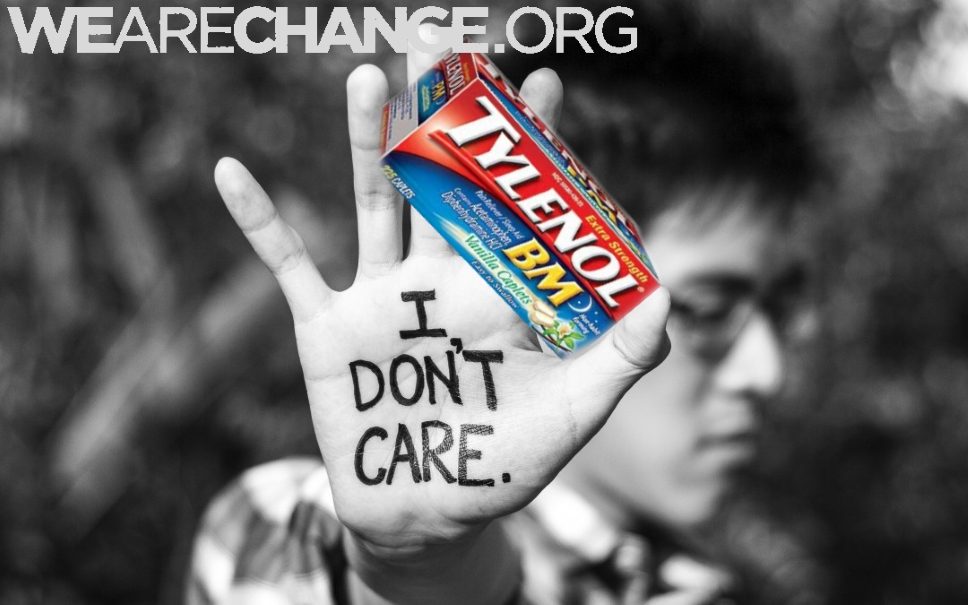 (AP/RT) Recent studies find that drugs that feature acetaminophen, such as Tylenol may be quite good at helping people get through aches and pains, but they might also make them less sensitive to the pain or suffering of others.
In a new study, researchers from Ohio State University found that individuals who took painkillers featuring acetaminophen – an ingredient found in popular over-the-counter drugs such as Tylenol, Sudafed, Vicks and hundreds of others – were less likely to empathize with other people’s pain than those who did not take the drug.

“These findings suggest other people’s pain doesn’t seem as big of a deal to you when you’ve taken acetaminophen,” Dominik Mischkowski of the National Institutes of Health, a co-author of the study, said in a statement. “Acetaminophen can reduce empathy as well as serve as a painkiller.”

Tylenol makes you care less about other people’s Feelings

Researchers said they don’t currently know why exactly acetaminophen acts this way on people, but that the results have important implications for everyday life that can be concerning. Roughly 52 million adults in the US use some kind of medicine featuring this ingredient every week.

“Empathy is important,” said Baldwin Way, another co-author of the study. “If you are having an argument with your spouse and you just took acetaminophen, this research suggests you might be less understanding of what you did to hurt your spouse’s feelings.”

To discover these results, researchers conducted experiments involving college students. In one, 40 students were given a drink featuring 1,000 mg of acetaminophen, while another 40 were given a drink that didn’t have the ingredient at all. The drug was given an hour to take effect, and the students were then told stories about people who experienced pain, including but not limited to being cut to the bone by a knife and losing a loved one.

Students were then asked to rate the pain experienced by the people in the stories. Those who took the drink featuring acetaminophen rated the pain as less severe than those who didn’t.

In another experiment, students were hit with four two-second blasts of white noise and asked to rate how unpleasant they were, as well as how unpleasant others may think they are. Those who took acetaminophen were less bothered by the noise – and also thought it would be less unpleasant for others.

Finally, a third experiment involved students who watched two people in a group of three exclude the third person from a game. Those who had taken acetaminophen rated that excluded person’s hurt feelings as less painful than those who hadn’t taken the drug.

“In this case, the participants had the chance to empathize with the suffering of someone who they thought was going through a socially painful experience,” Way said in a statement. “Still, those who took acetaminophen showed a reduction in empathy. They weren’t as concerned about the rejected person’s hurt feelings.”

The findings are not all that surprising, since a 2004 study showed that the part of the brain activated when someone is experiencing pain is the same part that’s activated when they try to empathize with another person’s pain. However, the researchers said that more study is needed to learn more about acetaminophen’s effects, and they also want to determine whether another painkilling ingredient ? ibuprofen, the main ingredient in Advil ? creates the same results.

Tylenol makes you care less about other people’s pain