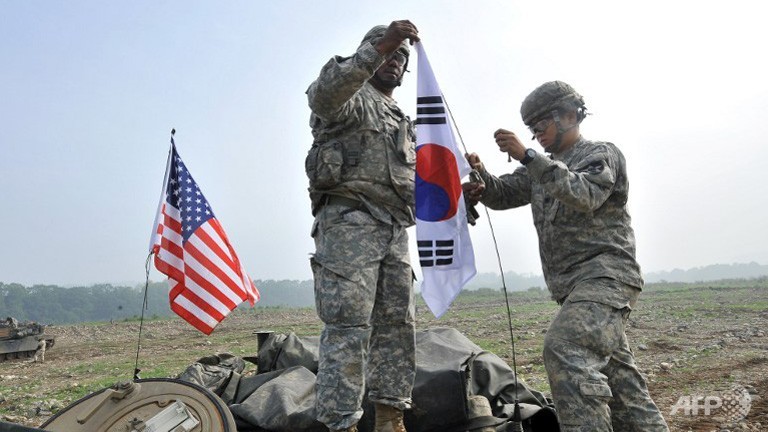 The latest North Korean missile tests quickly gained the world’s’ attention and the military interests in the region. U.S. troops recently conducted a joint military exercise while being stationed in South Korea, alongside South Korean forces in anticipation of a possible confrontation with North Korea.

The combat drills, dubbed “Max Thunder” is reportedly an annual two-week exercise which will focus on the flying capabilities of both countries in the region. Around 1,200 U.S. troops and 600 ROK forces are going to be training during the course of the Max Thunder exercise.

Lt. Gen. Thomas W. Bergeson, the 7th Air Force Commander told National Interest that, “This exercise will rigorously test our aerial combat capability and highlights the ironclad commitment between the U.S. and (South Korea), and the multifaceted capabilities we possess in this theater,”

The Korean War never ended, and the established Korean Demilitarized Zone (DMZ) is still in effect from 1953. The recent missile tests in North Korea have garnered world attention, and have marked a turning point in this war which can turn violent again, depending on the actions of the leaders of each country.

I have great confidence that China will properly deal with North Korea. If they are unable to do so, the U.S., with its allies, will! U.S.A.

According to the Seoul Times, officials from the U.S. and South Korea both claim that the latest drill is a routine exercise to improve their combined military power, but North Korea sees it as a foreshadow to a full-fledged invasion. An unidentified military source who spoke to the Seoul Times in February said that:

“During the Key Resolve joint drill to be held in March, the two nations’ forces will jointly conduct exercises to remove North Korea’s nuclear weapons and WMDs… Although this exercise first began in 2009, (the military) will strengthen the program this year.”

The Seoul Times reports that there are “about 28,500” U.S. troops stationed in South Korea as part of an ongoing effort to deter any sort of North Korean aggression on the country. They insist that a uranium enrichment facility was found in North Korea in November, which makes the country capable of producing atomic weapons.

It is important to emphasize that this is just the latest set of drills in South Korea and that this has been happening in the country perpetually since the Korean Armistice Agreement in 1953. In fall of 2016, it was reported that around 25,000 U.S. troops engaged in a military exercise in South Korea and that North Korea threatened a pre-emptive nuclear strike in response.

In a recent trip to South Korea, U.S. VP Mike Pence spoke on the evolving crisis in the region, saying that, “There was a period of strategic patience but the era of strategic patience is over.” Using the recent bombings in Syria and Afghanistan as evidence, he asserted that, “North Korea would do well not to test his resolve or the strength of the armed forces of the United States in this region.”

This could just be the latest controversy in the Korean peninsula, or it could prove to escalate the tensions between Pyongyang and Washington. In time we will see.