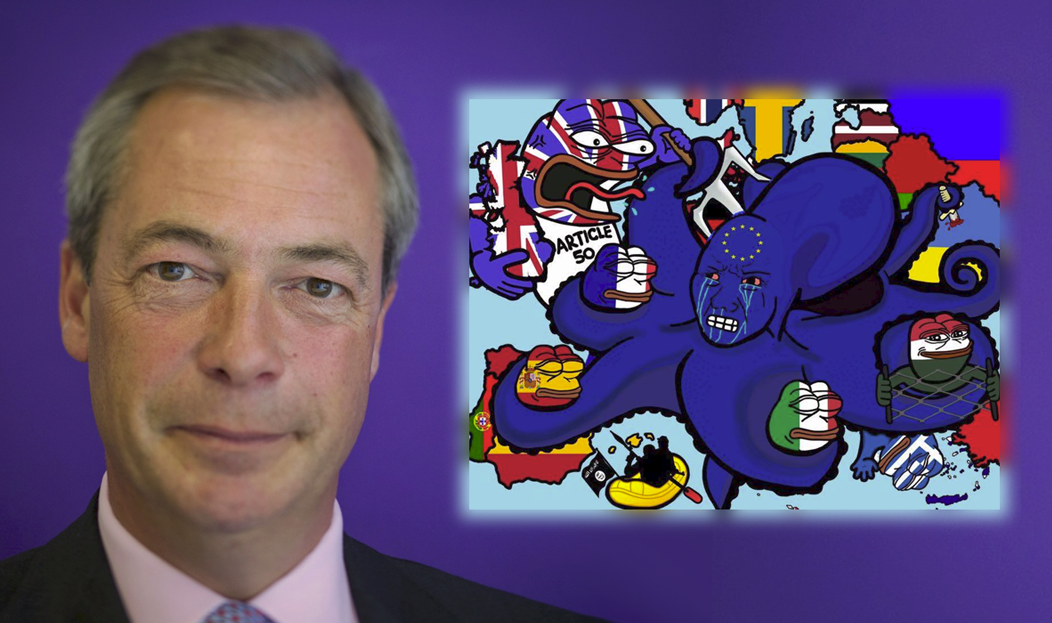 The UK 2017 General Election has resulted in a hung Parliament with the Conservatives winning 318 seats and Labour 261. Since no party managed to win the necessary 326 seats to make a majority on their own, the options are to either form a coalition to create a majority or operate as a minority government. 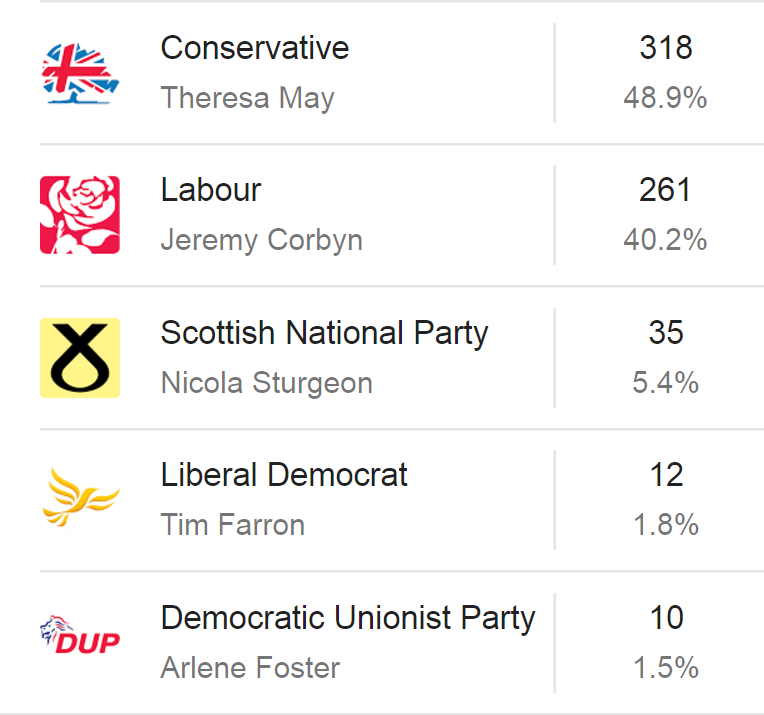 The key number of seats to achieve is 326, if a party gets there then they will be able to form a majority government.

The result has been seen as a failure for the Conservatives since in the 2015 General Election the Tories won 331 seats, comfortably beating Labour’s 232. Speaking after visiting Buckingham Palace, Theresa May said only her party had the “legitimacy” to govern, despite falling eight seats short of a majority.

In 2010, no one party managed to win the necessary 326 seats, there was a hung parliament, so the Conservatives and Liberal Democrats formed a coalition.

Jeremy Corbyn has hailed Labour’s “incredible result” and has called for May to resign. The Liberal Democrats’ Tim Farron also called on May to quit. The Scottish National Party or SNP will work with others to keep the “reckless” Tories out “if at all possible”.

Theresa May’s government will carry on Brexit negotiations to the existing timetable.

Who Are The DUP?

The Tories are forming a coalition government with the controversial Democratic Unionist Party or DUP, to “provide certainty” and keep the country “safe”.

The Democratic Unionist Party are a socially conservative party in Northern Ireland. They’re anti-abortion and also oppose same-sex marriage. They have a history of climate change denial and in 2011 five of their MPs called for the return of the death penalty. They are also Theresa May’s only option to retain power.

DUP are natural bedfellows of the Conservative party. Britain backed loyalist terrorist groups supported by the DUP in the North of Ireland. pic.twitter.com/AAcsyTZeBY

Almost 300,000 people have signed a petition against the Tory-DUP deal in just 12 hours.

Are The DUP Connected To Saudi Arabia?

It appears that the DUP are connected to Saudi Arabia and have, in the past, received a donation of £425,622. The DUP used some of this money to produce a four-page glossy propaganda supplement urging readers to vote Leave in the Brexit referendum. The supplement cost a staggering £282,000.

Celestine, a popular geopolitical analyst, didn’t seem at all surprised by the coalition.

The Occupied North of Ireland

The term 'Northern Ireland' is becoming normalised. There's only one Ireland with 6 of its counties still being deemed as British property

…and a general reminder of how Britain colonised other countries.

It has been a difficult time for the people of the UK who have had three terrorist attacks in quick succession in the run up to the election.

This has made people frightened. The Conservative mantra was “Strong And Stable”.

He never votes but due to these recent terror attacks in the UK, the mainstream media convinced him Theresa May will keep us safe & secure.

May’s calls to regulate the internet in response to the terrorist attacks have not been popular.

It would be hysterical if Corbyn won and Theresa May was out, if only to highlight how retarded she is on net regulation and campaigning.

How Do Americans View The UK Election

Photos and videos like this are all over the internet showing the apparent replacement of the native population. This has caused alarm in some people in both the UK and in America. For many in the UK this just isn’t their everyday reality, yet, depending on location.

This picture wasn't taken in Islamabad but in Trafalgar Square, London. The politicians have conspired to replace Europeans with immigrants. pic.twitter.com/0nWOwR95cK

Voting is a difficult decision and its frustrating that there is no ‘perfect’ party. 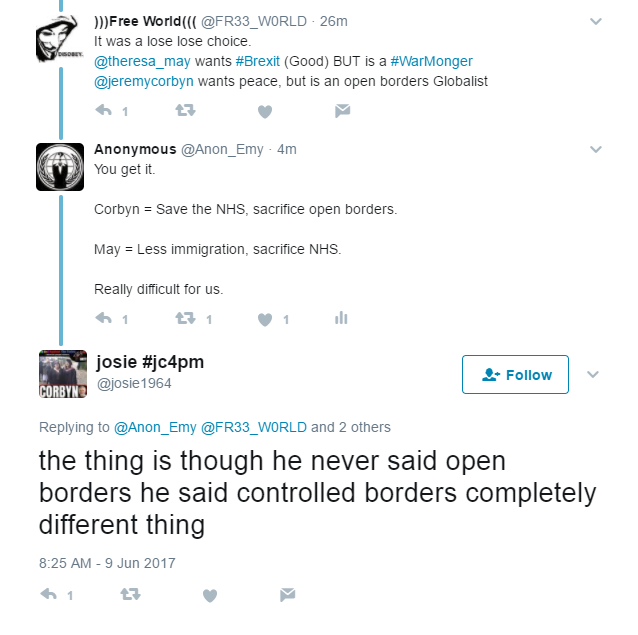 /pol/ expressed concern for the UK in this tweet which hit us right in the feels. 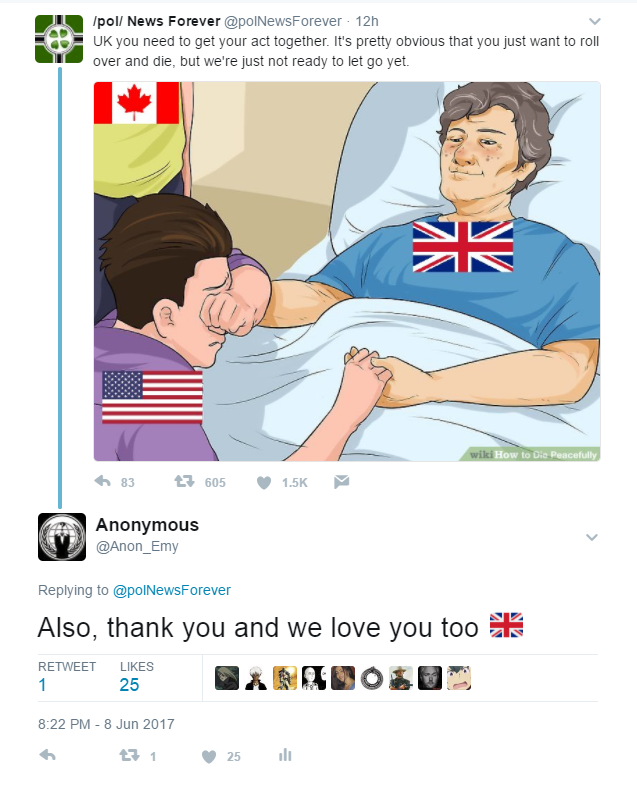 MASSIVE WIN AGAINST THE MAINSTREAM MEDIA

Large servings of humble pie are being consumed all over the UK today. Nowhere more so than by the members of the media. Owen Jones who writes for the Guardian, like many other journalists, were forced to eat their words. 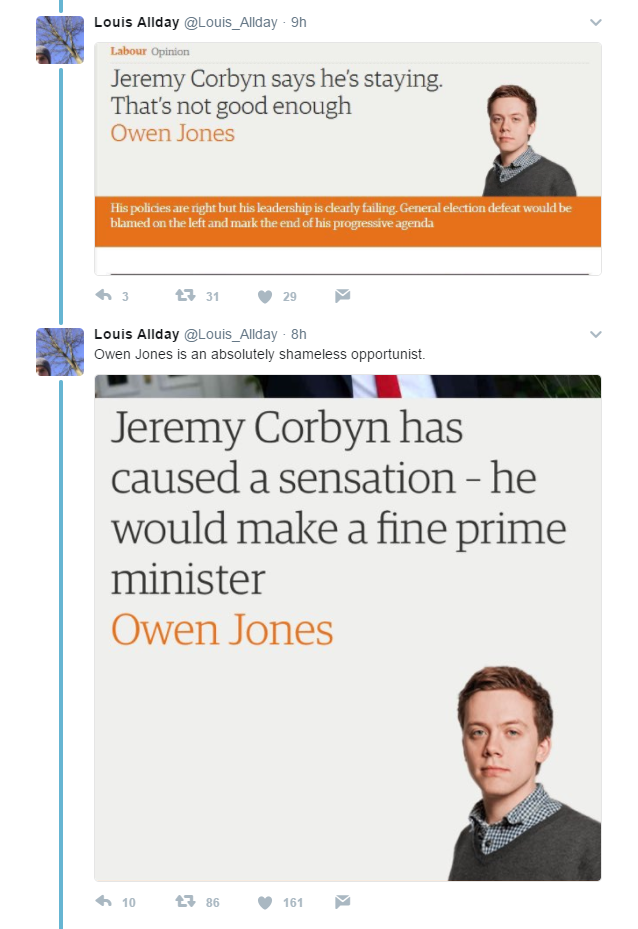 Jack Xatzinikolas, a popular British writer, journalist and activist who has campaigned over poverty issues, particularly hunger relief and has published a blog and several books of “austerity recipes“, made this humble tweet.

I didn't think Corbyn's team could deliver this. I was wrong. I apologise to those I dismissed. Sorry.
I am devouring humble pie gratefuly.

Bernie Sanders understands that the people of the UK will only tolerate a government that won’t invest in public services for so long. People saw the destruction of the NHS and went to vote. 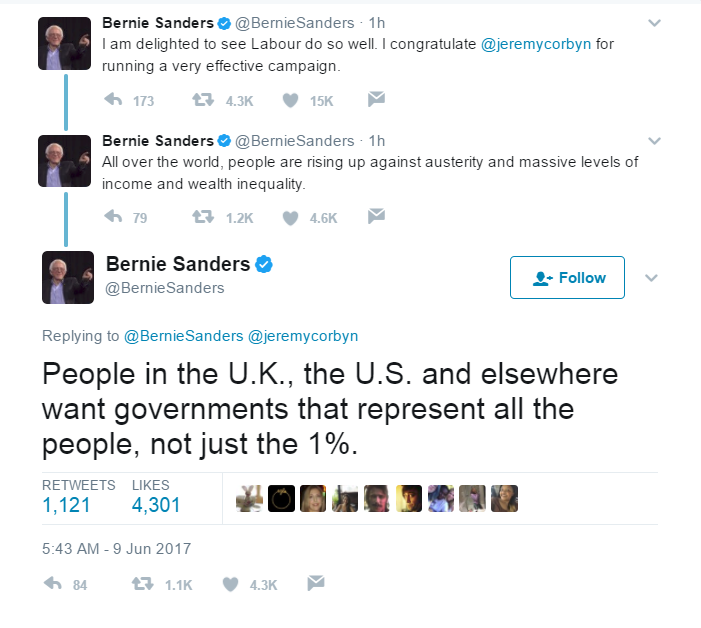 Styx, the popular geopolitical analyst, gave his opinion of the two candidates.

Prime Minister Theresa May is a deluded wannabe thatcher and her opponent is a Krugman-looking socialist cretin.

Did the Americans Think British Nationalism Featured In The Election? 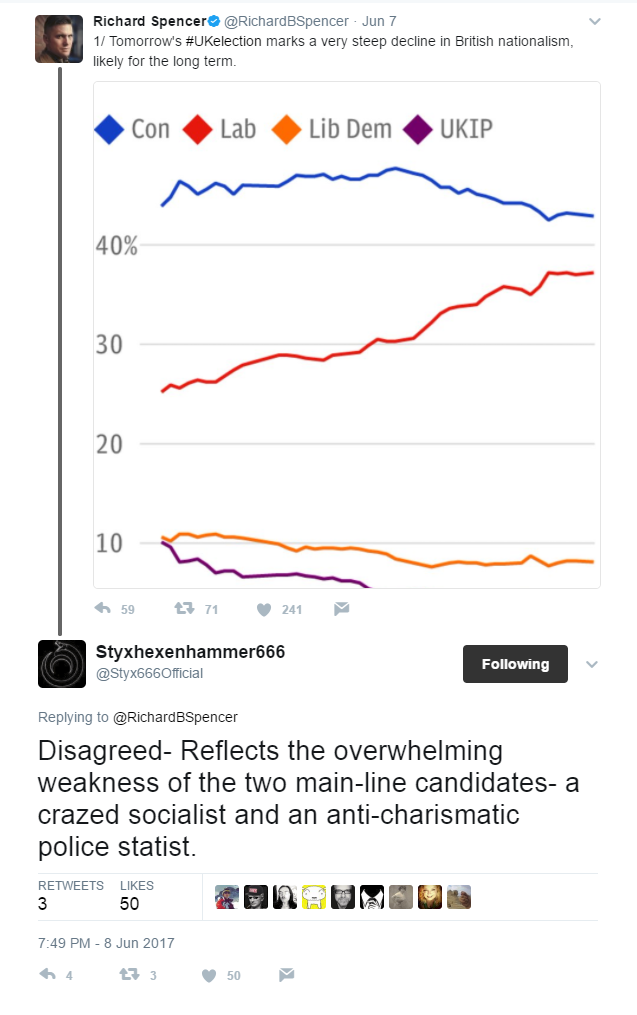 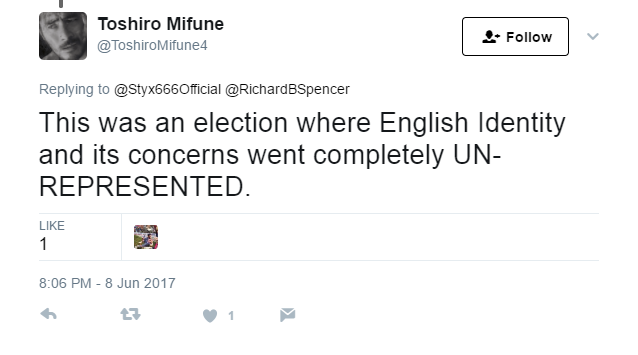 What Happened To Nigel Farage and the UK Independence Party?

UKIP is a Eurosceptic and right-wing populist political party. On July 4 2016, Farage announced his resignation as leader of UKIP, triggering a leadership election. Eventually Paul Nuttall succeeded Farage but resigned after the election since UKIP won no seats this time.

This update just in! 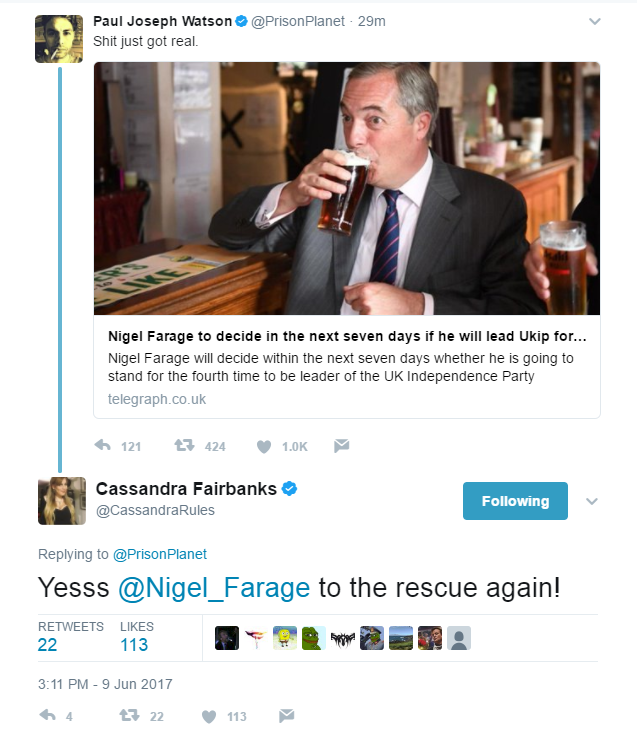 It is thought that Brits living in the South do not take Nigel Farage very seriously and he is not well liked or respected but thought of more favourably by those living in the North of the country. The fact that Trump endorsed Farage holds little weight with some, since the MSM convinced them Trump is sexist and racist. Farage is also believed to be fully racist, by some at least. 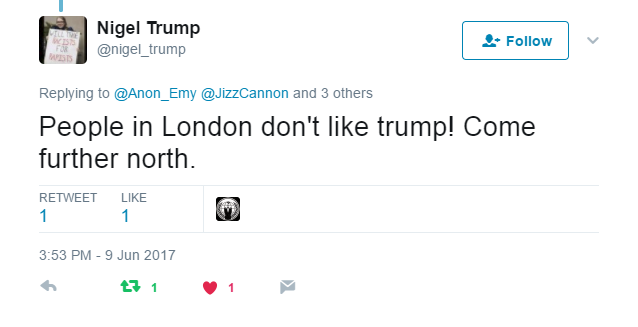 In 2015, UKIP won 3.8 million votes and had only one elected MP in the House of Commons. However the party came second in 120 constituencies. Advocates for electoral reform said, at the time, that the outcome exposed the limitations of the first-past-the-post system, prompting urgent calls for a change to the way Britain votes.

Britain has not implemented proportional representation yet.

Styx has voiced support for UKIP.

Who knows, if the UK public think the new government isn’t taking Brexit seriously, perhaps Farage will gain some support. Farage gaining support, at some point in time, certainly can’t be ruled out.

People seem to think Farage is the only politician who dislikes the EU. Corbyn also attacked the European Union.

Corbyn has never liked the EU that's something remainers fail to grasp pic.twitter.com/PD266mLqzq

Check out this old video of Corbyn calling out the EU!

Let us know what you think in the comments. Would you vote for Nigel Farage?

OH YEAH since we are not corporate or government WHORES, help us out: https://wearechange.org/donate