U.S the only country to oppose UN holding Israel accountable for war crimes, yet again 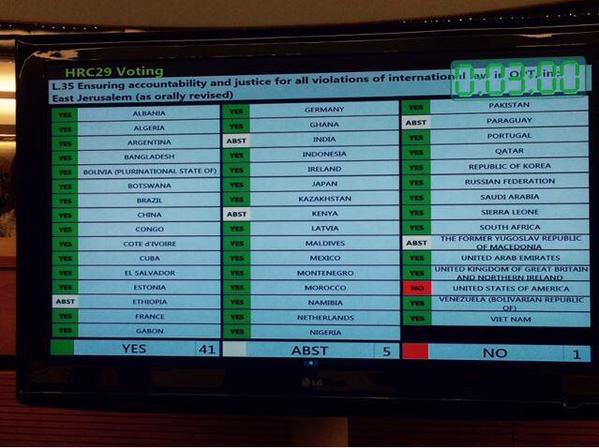 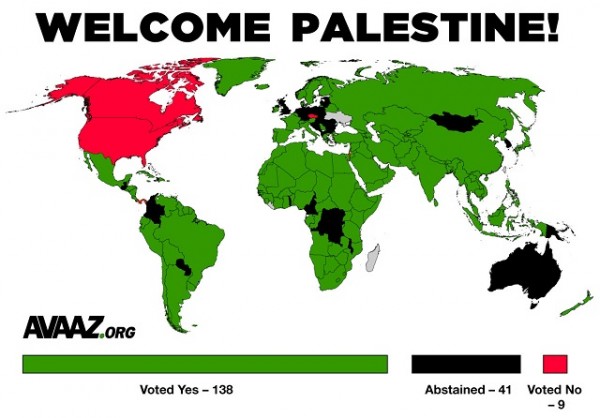 The US was the only country in the world to oppose a resolution calling for Israel to be held accountable for war crimes, at the 29th regular session of the United Nations Human Rights Council (UNHRC), held from 15 June to 3 July 2015.

The US voted against “ensuring accountability and justice for all violations of international law in” the Occupied Palestinian Territories (OPT).

41 nations voted for the measure, including Germany, France, Japan, Brazil, China, and more. Just five nations abstained—the most high-profile of which was India, which is presently run by a right-wing Hindu nationalist government that spends billions on Israeli weapons.

This vote came just weeks after the release of the UN Human Rights Council report on the 2014 Gaza war, which documents possible war crimes by Israel, including the deliberate targeting of besieged Palestinian civilians.

Israel and the US accused the UN of downplaying violations of international law by the Gazan armed resistance in its report. Scholar Norman Finkelstein, nevertheless, argued that the report was in fact biased in the interest of Israel, calling it “tepid” and “unserious,” accusing it of exhibiting “rank anti-Muslim bigotry.”

This is by no means the first time the US has flaunted its utter contempt for international law in the chambers of the UN. In fact, it did precisely the same less than a year before.

In July 2014, the US was yet again the only country on the UNHRC to vote against “ensuring respect for international law in the OPT.”

29 nations voted in favor of this resolution, including all of the so-called BRICS countries (Brazil, Russia, India, China, and South Africa). 17 nations abstained, including Germany and France, who voted for the July 2015 resolution. The US was the only country to defy the measure.

One and a half years earlier, just nine nations (the largest of which were the US, Israel, and Canada) voted against non-member observer status for Palestine at the UN. 138 countries voted in favor of the measure.

There are few issues that can unite this much of the international community in almost unanimous agreement.

Images like these show just how isolated the US is on the global stage, and just how deranged US public and political discourse around Israel-Palestine is. The fact that the international political disparity continued to grow in the wake of Israel’s summer 2014 attack on Gaza and that the US refuses to pass even the most moderately worded and lukewarm of UN resolutions further demonstrate this fact.

If Mondoweiss were a clickbait publication, the title of this piece would likely be “How the US Is a Rogue State, in One Image.”

The “battle for the hearts and minds,” as it is said, of 95% of the world was already won long ago. The international community is, with few exceptions, united in its desire to see international law respected in occupied Palestine (in the form of an end to Israel’s illegal occupation of the West Bank and East Jerusalem and the cessation of its illegal siege on Gaza) and human rights guaranteed to the indigenous Palestinian population.

The US is—and has long been, as renowned historian Rashid Khalidi details—the primary obstacle standing in the way of justice, equality, and peace in Israel-Palestine.