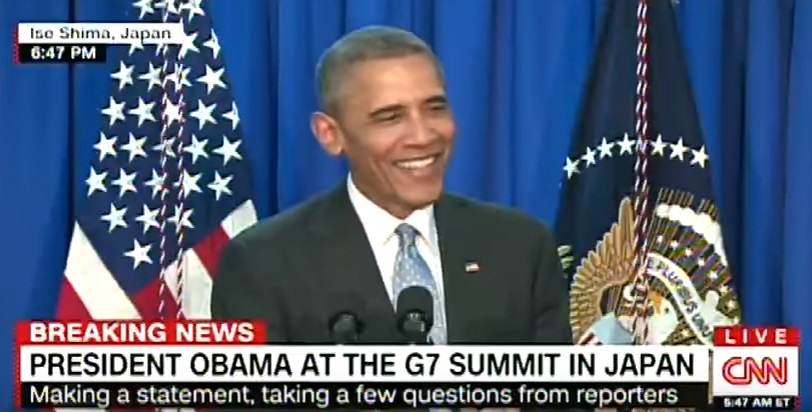 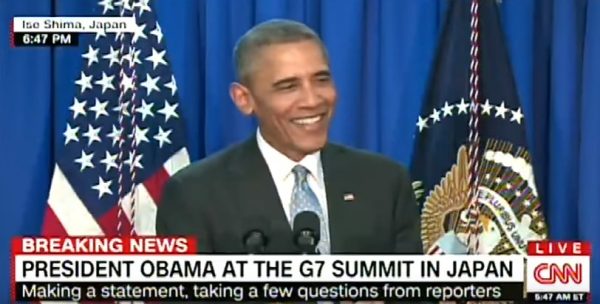 President Obama at the G7 Summit in Japan, full video below the article.

Speaking at a press conference in Shima, Japan, on Thursday, Obama announced that he would take one more question from a reporter as a “special bonus.” Apparently, the choice of question was not one that Obama was expecting or hoping for.

“Just yesterday we saw the State Department’s inspector general put out a report about Secretary Clinton’s emails. It basically undermines some of what she’s said about her email practices,” the journalist asked.

He then asked if Obama agrees with Clinton’s challenger, Bernie Sanders, that she should release the transcripts if she has nothing to hide.

“I’m wondering if you think that undermines her trustworthiness with the American people and if you agree with Bernie Sanders that she should release the transcripts of her highly paid speeches to Wall Street?” he continued.

As of the time of the questioning, it had been 111 days since the former Secretary of State promised to “look into” releasing her speeches.

Laughing in the face of transparency, Obama then took back his “special bonus” gift of answering a valid question.

“OK, you know what? I take it back. I’m not taking another one,” Obama responded.

“We’re in Japan, don’t we have something in Asia that we want to talk about? I’ll be talking about this in Washington the whole time,” he continued, before asserting that the press should ask the candidate’s campaigns.

“Look, I’ve already said a lot about these issues,” Obama stated. “I think those are better directed to the campaign.

The president then referred to the FBI investigation into his former Secretary of State as just “noise.”

“I think that the noise that is going back and forth between the candidates at this point, if you want insights into how they’re thinking about it, those should be directed to them.”

In the State Department’s Office of the Inspector General’s report that was released on Wednesday, it was revealed that Clinton did infact break the rules of the department — which she has adamantly denied throughout her campaign.

Clinton had set up a private server so that she could avoid potential Freedom of Information Act requests and hinder any investigations into her behavior by press or others.

If her attempts to block press aren’t terrifying enough, she may have also put national security secrets at risk.