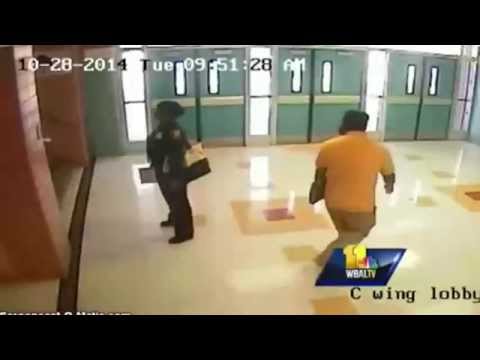 Surveillance footage from Vanguard Middle School in Baltimore shows a school police officer beating a 13-year-old girl with a baton during a scuffle involving two other students in October. All three girls were hospitalized with injuries they sustained from the officer, local NBC outlet WBAL reports.

The clip—published by WBAL today—opens on Starr, a middle-schooler, arguing with the unnamed officer. The officer pushes Starr against a wall, and Starr’s sister, also a student, walks toward the pair. Diamond, Starr’s cousin, then appears to make physical contact with the officer, who chases her and hits her at least twice with her baton.

Diamond was hospitalized with 10 stitches, her mother Tashona Neals told WBAL’s Jayne Miller, and the other two girls were pepper-sprayed. A photo taken after the incident shows Diamond’s shirt splattered with blood.

The girls were charged with assaulting the officer, WBAL reports, but prosecutors in juvenile court dropped charges after watching the video. They were also suspended and sent to alternative schools—a decision their attorney is now working to overturn.