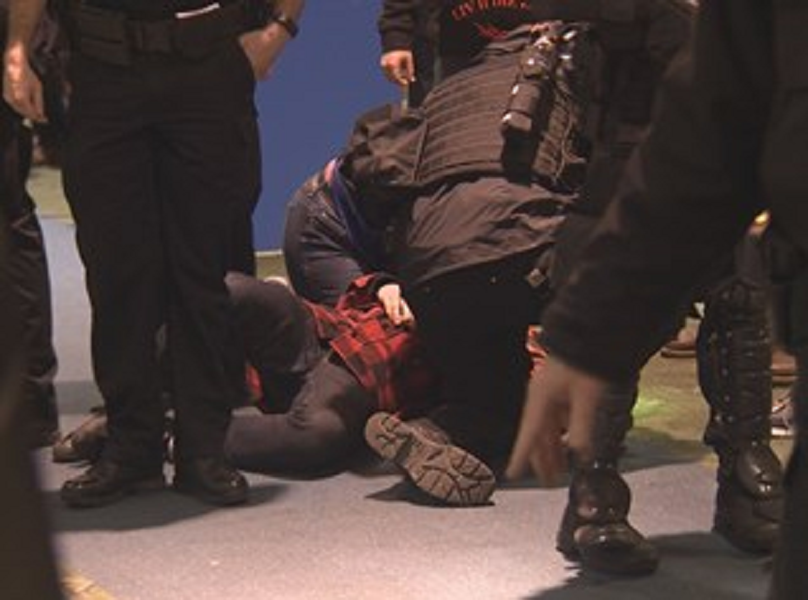 A violent mob of unhinged protesters has attacked yet another supporter of President Donald Trump, knocking him unconscious then continuing to taunt and berate him as decent human beings attempted to provide assistance.

The incident took place at the Portland Airport around 5 pm on Sunday evening during the protests against Trump’s temporary geopolitical ban, and videos were promptly uploaded to social media by multiple witnesses.

The victim was chased by the mob, some of whom were in black bloc, before being attacked.

As he laid on the ground injured, the crowd continued to taunt him, referring to him as “Nazi boy,” as the offensive term has been commonly thrown around very loosely to describe any and all Trump supporters.

In the shocking and disturbing footage, the highly aggressive mob is also seen screaming and chanting as the man’s body lays motionless on the ground.

Eventually, Portland Police officers arrived and surrounded the man to protect him, before moving him to safety to receive medical attention.

The “No Ban, No Wall,” protest began at 2pm, and hundreds were in attendance, including Oregon Senator Jeff Merkley, Congresswoman Suzanne Bonamici and Portland Mayor Ted Wheeler. The Facebook event page showed 1,600 people were interested in attending.

“Please join in a peaceful stand together for compassion and true American values. Join us for a show of solidarity against racist and ethnic travel bans. A commitment to non-violence and a willingness to be counted is essential. Car pooling encouraged. Leaving Corvallis at 12 noon,” the event page falsely advertised.

Sunday’s attack is just the latest in a string of a violence against Trump supporters — which has been deemed perfectly acceptable by left-wing media as long as you declare the person is a “Nazi.” Unfortunately, according to many on the left, that includes all of the millions of people who voted for our president.