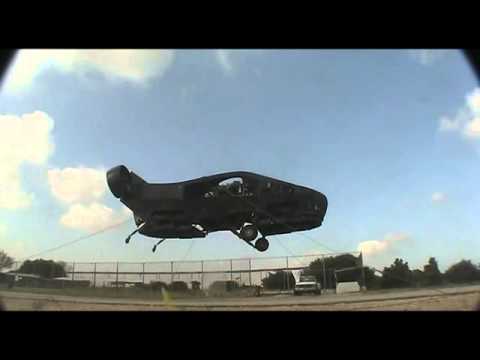 In an amazing new revolutionary technological advancement, Israel has finally achieved what others have only set out to do and created the world’s first remote-controlled flying car.

In a video posted to youtube by The Israel Project, the team demonstrates the flying car called the Cormorant that looks like something you would see in a sci-fi movie or the old tv show The Jetsons.

After, 15 years of development and more than 200 flights Urban Aeronautics, based in central Israel, hopes to bring the Cormorant into the public market by 2020. Formerly known as Air Mule, the drone is about the size of a family car and can be operated remotely.

The Cormorant is revolutionary, featuring internal rotors rather than external propellers, which allows the vehicle to easily navigate between buildings and utility wires.

“While pattern flights are routine for conventional fixed wing aircraft and rotorcraft, it is a significant milestone in the evolution of an entirely new family of Urban’s proprietary technology aircraft known as Fancraft.”  Urban Aeronautics said Jewish Business News reported.

“Unlike other (manned and unmanned) aircraft, the Cormorant’s autopilot relies primarily on inertial and ground reference, which is more complex than flying through open, unobstructed airspace,” Urban Aeronautics added.

“this flight paves the way forward for the immediate evolution of Cormorant from prototype to near-term production and ultimately commercialization of this groundbreaking technology – for broad applications and markets. This is the most exciting time in the Company’s history and we look forward to accelerating our progress now that the technology is fully proven,” Rafi Yoeli said.

“Just imagine a dirty bomb in a city and chemical substance of something else and this vehicle can come in robotically, remotely piloted, come into a street and decontaminate an area,” Urban Aeronautics founder and CEO Rafi Yoeli told Reuters.

Tal Inbar, head of the UAV research center at Israel’s Fisher Institute for Air and Space Strategic Studies, indicated that the Cormorant “could revolutionize several aspects of warfare, including medical evacuation of soldiers on the battlefield.”

The car has yet to meet all of the U.S. Federal Aviation Administration standards but its founder Yoeli has registered 39 patents to create the vehicle.

Its total price is estimated to be at least $14 million.

It can be remotely piloted or set to fly autonomously Times Of Israel reported.