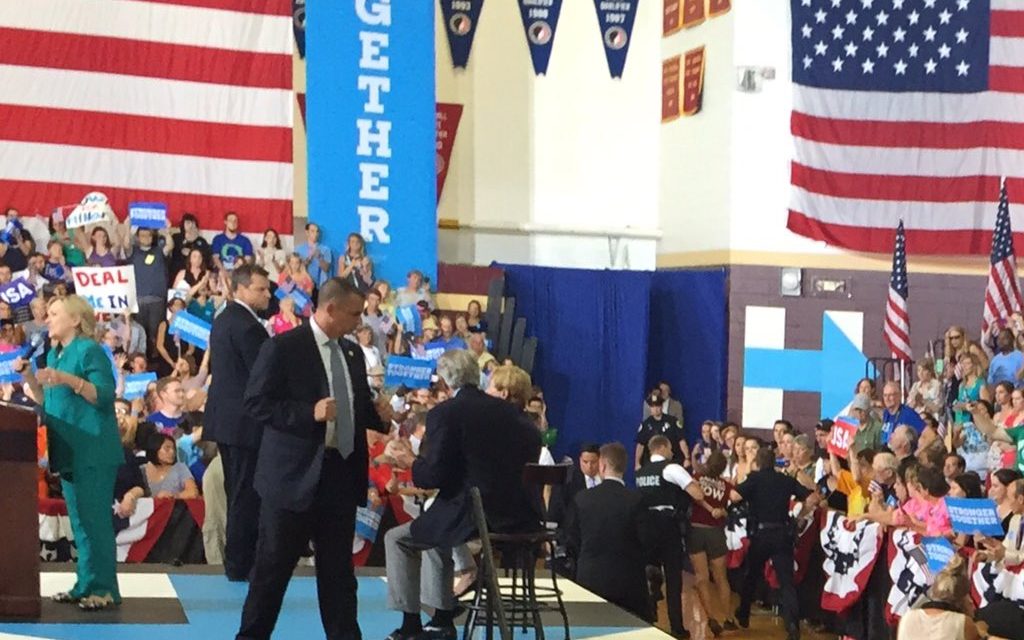 An animal rights protester was tackled and arrested by the Secret Service as she attempted to rush the stage at a small Hillary Clinton rally in Iowa on Wednesday.

Another protester runs at Hillary Clinton! But the MSM will never report on it! #CrookedHillary pic.twitter.com/wHUgqnMoSf

Kelsey Atkinson, 26, from Direct Action Everywhere, had hopped over the security gate and nearly made it to the stage when she was swarmed by agents. Several agents also surrounded Clinton on the stage, presumably to comfort her and prevent another embarrassing “short circuit” moment.

Atkinson was carrying signs that stated “Get Big Ag Out of Politics.” DxE activists say Clinton, who recently held a $50,000 per ticket fundraiser with Costco founder Jeff Brotman, has supported billions of dollars in subsidies to farm conglomerates, including Costco suppliers such as Hormel. According to their press release, a recent DxE investigation and rescue at a Costco supplier showed evidence that humane welfare reforms — which Costco has touted — are insufficient.

“Hillary is taking a huge amount of money from companies like Costco, and when government money goes back to their suppliers, it raises serious questions about undue influence,” Atkinson said. “If we’re serious about animal protection, we need to stop funding animal torture and start the process of abolishing the systems that exploit them.”

As Atkinson was being dragged out, Clinton asked the crowd, “some people get a little carried away, have you noticed that?

The former First Lady then attempted to rile up her seemingly majority-elderly audience by shouting, “well I get carried away when I think about all of the jobs we’re going to create.”

Clinton’s reaction to animal rights protesters at another rally last week, who were also from Direct Action Anywhere, sparked an internet frenzy questioning her health. Clinton appeared spooked and almost mentally shut down as protesters unveiled harmless signs stating, “until every animal is free!”

If Clinton has to be calmed down over a protester how will she handle a serious problem? She's not mentally fit.https://t.co/fmunp3j5Vi

A handler rushed to the stage to comfort her, saying “you’re OK. Keep talking. You handled it, we’re not going anywhere,” until the candidate seemed to snap out of it.