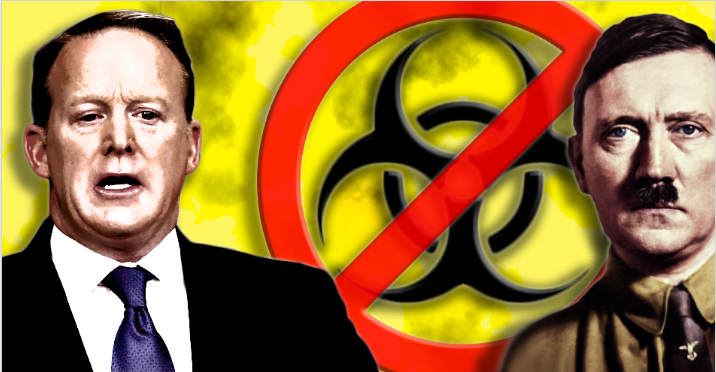 This triggered a firestorm of reporters pointing out the Nazi’s use of chemical weapons in WWII.

First, let’s break down the definition of a chemical weapon:

1. “Chemical Weapons” means the following, together or separately:

(a) Toxic chemicals and their precursors, except where intended for purposes not prohibited under this Convention, as long as the types and quantities are consistent with such purposes;

(b) Munitions and devices, specifically designed to cause death or other harm through the toxic properties of those toxic chemicals specified in subparagraph (a), which would be released as a result of the employment of such munitions and devices;

(c) Any equipment specifically designed for use directly in connection with the employment of munitions and devices specified in subparagraph (b).

The Nazi’s hydrogen cyanide meets the first condition and the gas chambers would qualify as a “device” in the second.

In early 1942,  Zyklon B emerged as the preferred killing tool of Nazi Germany for use in extermination camps during the Holocaust. Hydrogen cyanide gas was pumped into gas chambers killing scores of victims at once. Including Jews, Germans, Polish, and many other ethnic groups of humans that were singled out by Nazi leaders. 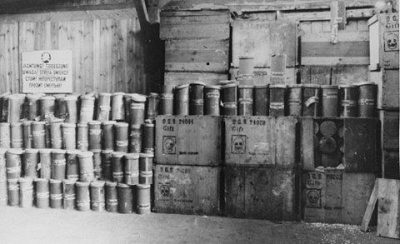 A stockpile of Zyklon-B poison gas pellets found at Majdanek death camp in 1944. 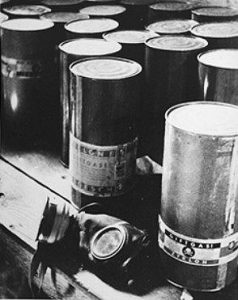 Close-up of the containers and a gas mask found at Majdanek.

In the above photographs the containers hold Zyklon B pellets that vaporize when exposed to air. During the killing process, prisoners at Auschwitz and other killing centers were forced into the air-tight chambers. The Zyklon pellets were then dumped into the chambers via special air shafts or openings in the ceiling.

Through a little research it is easy to find the use of chemical weapons most certainly occurred at the behest of Adolf Hitler. Against not only the Jewish people and many other groups, but his own. German-Jews were full citizens until they had their rights stripped away by Hitler’s totalitarian regime and they too ended up in concentration camps. Germans, or any others that were against Hitler’s regime also became victims of chemical warfare.

When asked about potential reasons why Russia would pull back its support of Syria —it’s decades long ally, Spicer apparently got some facts wrong regarding WWII stating:

“We didn’t use chemical weapons in World War II,” he said. “You had someone as despicable as Hitler who didn’t even sink to using chemical weapons. If you’re Russia, you have to ask yourself if this is a country and regime that you want to align yourself with.”

Moments later a reporter asked Spicer to clarify his remarks he stated:

“When you come to sarin gas, he was not using the gas on his own people the same way that Assad is doing.” Further adding, “he brought them into the Holocaust centers,” apparently referring to the gas chambers.

“In the way that Assad used them where he went into towns and dropped him down on innocents in the middle of town was not the same. I appreciate the clarification — that was not the intent,” Spicer said, implying that Hitler did not use chemical weapons.”

Spicer appears to be trying to limit his definition of chemical weapons to those dropped from planes or fired through cannons, as Assad has been alleged to have done, furthering that claim as well.

After the conference, Spicer back pedalled telling an NBC Reporter:

“In no way was I trying to lessen the horrendous nature of the Holocaust, however, I was trying to draw a contrast of the tactic of using airplanes to drop chemical weapons on innocent people.”

It appears Spicer has sparked some online displeasure and even outrage with his bold claims.

I hope @PressSec takes time to visit @HolocaustMuseum. It's a few blocks away. https://t.co/24fNoMUyS8

Someone get @PressSec a refresher history course on Hitler stat #Icantbelievehereallysaidthat

? @AprilDRyan's reaction as Spicer went on about "not even Hitler," like… "Is everyone else hearing this?" pic.twitter.com/t2NK9VP4xy

It is important to note that in WWII the U.S is responsible for the deaths of hundreds of thousands of innocent human beings, through the use of nuclear and napalm strikes, though not being considered ‘chemical weapons’, I believe we can agree they belong in the same category.

Also, in the early 1950’s the government had the army deploy motorized blowers on top of residential high-rises in low-income, mostly black St. Louis neighborhoods, including areas where as much as 70% of the residents were children under 12. In an attempt to cover up what the government was actually doing, they lied claiming it was an experiment with a smokescreen to protect the city from Russian attacks. However, they were actually pumping the air full of hundreds of pounds of finely powdered zinc cadmium sulfide. The government admitted there was a second ingredient in the chemical powder, but whether or not that ingredient was radioactive remains classified. Since the tests an alarming number of local residents have developed cancer.

In closing, governments and ruling classes throughout history are responsible for using tactics such as chemical warfare against their own people. They—governments— will continue to do so and lie about it through the guise of experiments and false flag attacks. Shifting the blame on others by comparing one tyrant to another does not excuse the fact hundreds of thousands of human beings fall victim to chemical warfare at the behest of their own governments throughout history.