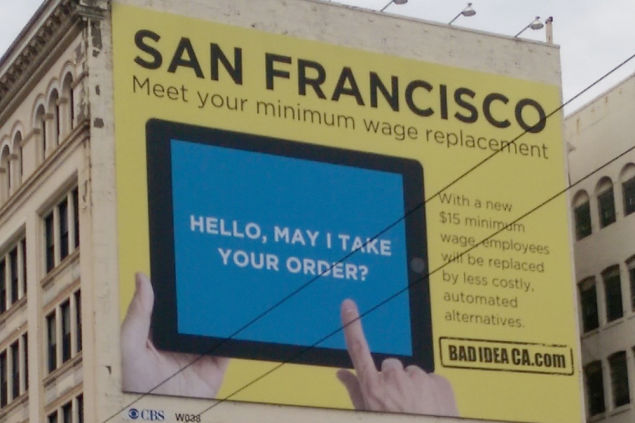 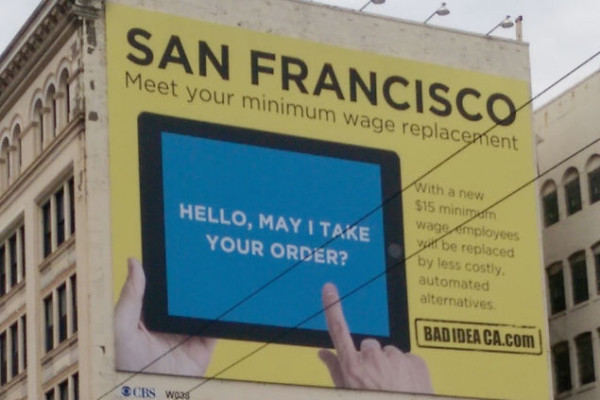 (Forbes)As we keep trying to point out to people there really isn’t anything even remotely resembling a free lunch when it comes to the discussion of wages and labor. Meaning that just because well meaning liberals wave their magic wand and decree that wages will rise there will indeed be countervailing effects. And in San Francisco, where the minimum wage was recently raised we did indeed see that comic book shop insisting that it just couldn’t survive. And now we’ve another tale, this time from Chipotle. Beef prices have been rising around the country so they’ve raised the prices, around the country, of their beef products. Wages in San Francisco have been rising strongly so they’ve raised the prices of all their products in San Francisco strongly. There really is no free lunch. A rise in wages will come out of either less labor being employed, lower profit margins (and fast food doesn’t have those wide enough to take the strain) or price increases to consumers.

And it’s that last which is happening as Mark Perry points out:

• In our weekly survey of ten of Chipotle’s markets, we found the company implemented price increases in half of the surveyed markets this week—San Francisco, Denver, Minneapolis, Chicago, and Orlando. In most markets, the price increases have been limited to beef and average about 4% on barbacoa and steak, toward the lower end of management’s expectation for a 4% to 6% price increase on beef.
• San Francisco, however, saw across-the-board price increases averaging over 10%, including 10% increases on chicken, carnitas (pork), sofritas (tofu), and vegetarian entrees along with a 14% increase on steak and barbacoa. We believe the outsized San Francisco price hike was likely because of increased minimum wages (which rose by 14% from $10.74 per hour to $12.25 on May 1) as well as scheduled minimum wage increases in future years (to $13 next year, $14 in 2017, and $15 in 2018).

A rough guide to the finances of the fast food industry is as follows. 30% goes on wages, 30% of revenues goes on ingredients and the other 40% is everything else. Rents, advertising, capital costs and, of course, profits. Those profits are pretty low. 5% of revenues isn’t an out of order estimation of the net profit margins in the business (and, of course, that’s an average, as some locations and some whole chains lose money).

So, if we by legislative fiat raise the price of one of those inputs then something, somewhere, has to give. Those profit margins are already pretty thin and so they’re not going to be where that extra cost comes from. More than that if we reduce the returns to capital in a particular line of business then less capital will be invested in that line of business in the future. This means fewer jobs in that line of business: This is one of the ways that a rise in the minimum wage destroys jobs. Fewer will be created in the future than would have been in the absence of the rise in the minimum wage.
It’s possible that employers will be encouraged to deploy their labor in a more productive manner as a result of the price increase. This is the same statement as fewer jobs will be created. For if I go and raise labor productivity then by definition I need less labor for any given level of output. Or of course employers could just automate the process a little more and that also means fewer jobs.
So, if employers either economize on labor or profits, there will be job losses: the minimum wage rise does reduce employment.

And just to head off at the pass one of the more insane points that people try to make. That if the workers at Chipotle are now making more money then they’ll spend more at Chipotle, and the company’s profits will rise! This doesn’t even pass the basic math test, let alone any economic one. For note above the split in revenues. About 30% of revenue is spent upon labor. The other 70% is spent upon other things, including that 30% or so on food ingredients. So, if Chipotle raises wages by $100 (just as an example) and all of those wages are then spent in the same store, it is impossible for profits to rise. Think about it for a moment: the wage bill has just gone up by $100. Revenues have just gone up by $100. But the food bill has also gone up by $30. So, the increase in costs is $130 (even in the very best, best, case) while revenues have gone up by $100. This is known to the cognoscenti as a loss, not an increase in profit.

There really is no such thing as a free lunch. Only lunches of variable cost. And if we increase the cost of one of the major inputs into such lunches then something else will give. Here, as a result of the rise in the minimum wage Chipotle has raised prices in that specific location where the minimum wage rise occurred.

As we’ve been saying all along: a rise in the minimum wage really does destroy jobs.