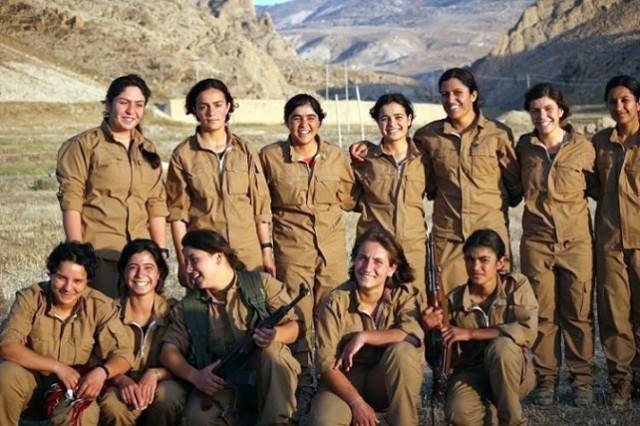 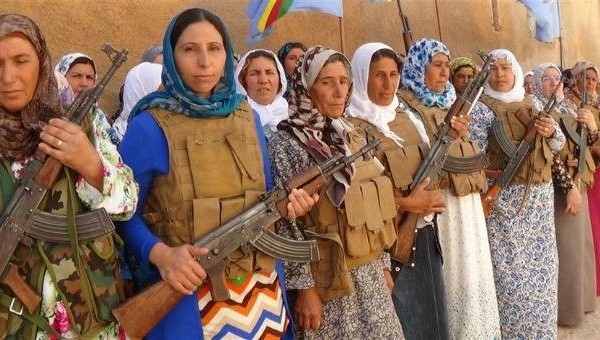 The Kurdish women’s resistance operates without hierarchy and domination and is part of larger, societal transformation and liberation. The world’s powerful institutions operate through the state-structure, which has the ultimate monopoly on decision-making, economy, and the use of force. At the same time, we are told that today’s prevalent violence is the reason why the state needs to protect us against ourselves.

Communities that decide to defend themselves against injustice are criminalized. Just have a look at the generic definition of terrorism: the use of force by non-state actors for political aims. Never mind state terrorism. As a result, women, society, and nature are being left defenseless, not only physically, but socially, economically, and politically. Meanwhile, the omnipresent state security apparatuses that openly lead economies of arms trade and benefit from pitting communities against each other for their dirty wars give the illusion of protecting “us” against a mysterious “them.” In nature, living organisms such as roses with thorns develop their systems of self-defense not to attack, but to protect life.

Over the last year, the world witnessed the historic resistance of the Kurdish city called Kobane. That women from a forgotten community became the fiercest enemies of the Islamic State group, whose ideology is based on destroying all cultures, communities, languages, and colors of the Middle East, upset conventional understandings of the use of force and warfare.

It was not because men were protecting women or a state protected its “subjects” that Kobane will be written in humanity’s history of resistance, but because smiling women and men turned their ideas and bodies into the ideological front line on which the Islamic State group and its rapist worldview crumbled apart.

Especially in the Middle East, it is no longer enough for women to “condemn violence” when violence has become such a constant factor in our lives, when our perceived, or constructed status as “victims” is used as a justification by imperialists to launch wars on our communities. The rise of the Islamic State group showed the disasters that full dependency on men and state-armies bring: nothing other than femicide. As such, a radical self-defense mechanism is needed.

The Kurdish freedom movement’s war conduct rests on the concept of “legitimate self-defense” and includes establishing social and political grassroots mechanisms to protect society beyond narrow physical defense. In nature, living organisms such as roses with thorns develop their systems of self-defense not to attack, but to protect life. Abdullah Öcalan, the ideological representative of the PKK, or Kurdistan’s Workers’ Party, terms this as the “rose theory.” 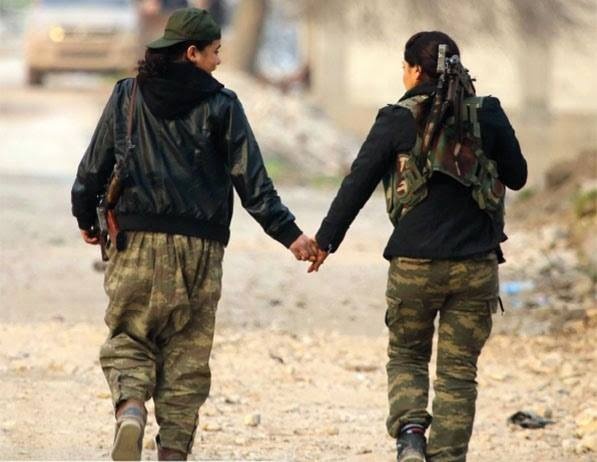 Two Defense fighters in Kobane | Photo: HAWAR News In order for society to similarly resist without being militarist, it must refrain from imitating state-like concepts of force and instead protect communalist values, deriving its power from the grassroots.

Society, especially women, Öcalan claims, must first of all “xwebûn,” or be oneself. Only with the realization of one’s own existence and its meaning, can one claim the right to live and defend oneself and the community. This must be based on a society that is politicized, self-aware, conscious, and active, while internalizing community-loving ethics — including fundamental values such as the commitment to women’s liberation, rather than relying on law enforced by the capitalist state and its police apparatus.

What turned Kurdistan into a pilgrimage site for women and anti-system movements around the world was this ideological stance that defended life, in the face of an army of death. The defense forces in Rojava illustrate how self-defense can work without hierarchy, control, and domination: In the midst of war, the Kurdish People’s Defense Units, or YPG, and its women’s brigade the YPJ, as well as the internal security units, asayish, focus on ideological education. Half of it is on gender equality. Academies educate fighters to understand that they are not a force of revenge and that the current mobilization is a necessity due to the war.

The asayish academies work toward a community with an asayish without arms, who verbally mediate disputes in the neighborhoods with the ultimate aim of abolishing the asayish altogether by building an “ethical-political society” that will solve its own problems. They reject the police label, because rather than serving the state, they serve the people, because they are the people. The asayish academy in Rimelan used to be a secret service center of the Syrian regime. Some students were once tortured by the regime as political prisoners there. Commanders are elected by battalion members based on their experience, commitment, and willingness to take responsibility.

This idea of leadership in the spirit of sacrifice is the reason why many of the martyrs of the YPG/YPJ were experienced, loved commanders. For women, self-defense is further a matter of life or death: The Yazidi women of Shengal (Sinjar), who are portrayed as passive, pitiful victims by the reckless media, now reject being essentialized as rape victims and have, similar to YJA Star (women’s army of the PKK) and the YPJ, the Women’s Defense Forces in Rojava, built their own autonomous women’s army called YPJ-Shengal, the self-defense force of the Yazidi women, parallel to their emerging autonomous self-governance structures. 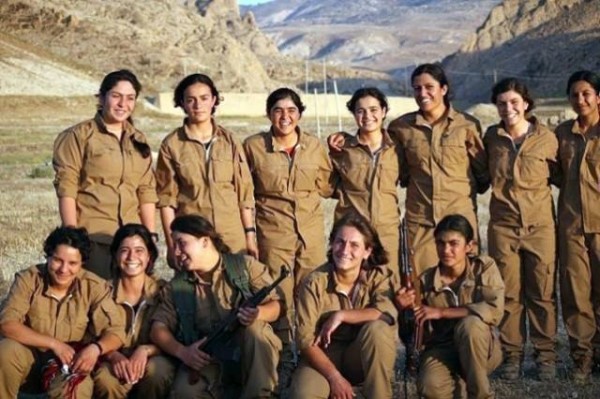 It is not a coincidence that the first standing armies emerged with the rise of accumulation of wealth, which also marked the institutionalization of patriarchy and the predecessors of the state.

The nation-state insidiously asserts its existence by drawing borders between communities, creating paranoia and xenophobia where there have been mosaics of cultures for centuries. Thus, if we are committed to defending society, we must also philosophically tackle all attacks on society, since systems of domination and hierarchy first establish themselves in thought. Dualisms like man-woman, state-society, human-nature aim to portray hierarchical relationships as natural. What Thomas Hobbes called “homo homini lupus est” to legitimize the unchallengeable leviathan called the state, is practiced big-brother style in our modern times.

We must challenge the fascist history-writing that belittles society and objectifies nature and instead practically seek solutions to social problems with a “sociology of freedom” centered around the voices and experiences of the oppressed. Against the racist premises of the separatist nation-state order and its mental and physical borders, society must strengthen the notion of the “democratic nation,” conceptualized by Öcalan to dissociate the idea of the nation from meaningless ethnic forms of belonging, to strengthen a more meaningful ethical unity based on principles like women’s freedom, especially in the era of the Islamic State group.

The Rojava Revolution, where Kurds, Arabs, Syriacs, Turkmens, and Chechens try to create a new alternative system together, rests on this political notion. “Our philosophical views made us women conscious of the fact that we can only live by resisting. Our revolution goes far beyond this war. In order to succeed, it is vital to know what you fight for.” Self-defense must thus not only fight against, but also for something, especially in the Middle East, where all forms of violence are performed on an unbearable scale.

Thus, self-defense is the radical attempt at dissociating power from the patriarchal militarist system – and women must be the avant-garde militant self-defense of a self-determining, more beautiful, just, free life. Self-defense, accompanied by revolutionary thought, has the potential to bring about radical social change. The Rojava Revolution with its model of “democratic confederalism,” as proposed by Öcalan, is a shining example of the power of the people. As YPJ-fighter Amara from Kobane told me: “Once again, the Kurds appeared on history’s stage. But this time with a system of self-defense and self-governance, especially for women, who may now, after millenia, write their own history for the first time. Our philosophical views made us women conscious of the fact that we can only live by resisting.

Our revolution goes far beyond this war. In order to succeed, it is vital to know what you fight for.” Dilar Dirik, 23, is part of the Kurdish women’s movement, a writer, and PhD student at the Department of Sociology, University of Cambridge.

This content was originally published by teleSUR at the following address:
http://www.telesurtv.net/english/opinion/Kurdish-Womens-Radical-Self-Defense-Armed-and-Political-20150707-0002.html. If you intend to use it, please cite the source and provide a link to the original article. www.teleSURtv.net/english