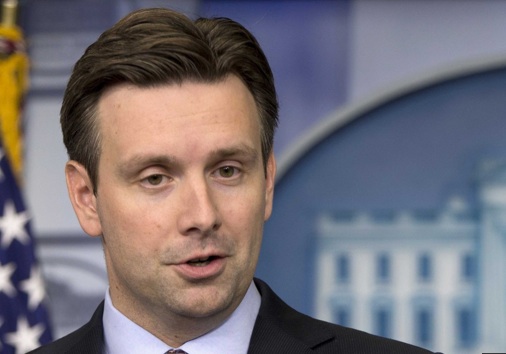 The garbage coming out of the White House on gun control lately is beyond belief. Earlier this week while Obama was in France, a country that has experienced multiple mass shootings recently, he said counties other than the US do not have mass shootings. Now Obama’s mouthpiece Josh Earnest is saying that an assault weapons ban would have stopped the terrorist shooting in California, conveniently forgetting that California already bans so-called assault weapons.

After an Oval office meeting in which Obama downplayed the radical Islam aspect of the Muslim terrorist attack in San Bernardino, CA yesterday, reporters caught up with press secretary Josh Earnest. Mediaite reports that Earnest was asked how we can stop further shootings like the one in California that took 14 innocent lives:

At a press briefing after the meeting, White House Press Secretary Josh Earnest told reporters, “one thing we could do is we could ban the sale of assault weapons,” adding “that certainly would make it harder for those individuals who shouldn’t have them from getting them.”

Earnest suggested an assault weapons ban is a logical move for a country that experiences so much gun violence. “It would be an indication to some common sense thinking people that we should consider some different laws,” he said.

Interesting theory. Let’s not forget that the shooting took place in California and that the state has banned “assault rifles” for quite some time. If this assault weapons ban didn’t stop the shooting yesterday in San Bernardino, how would a similar ban stop a similar killing anywhere? This is the insane logic that propels all liberal thinking.

Islamic extremists Syed Farook and Tashfeen Malik were armed with two semi-automatic rifles and two semi-automatic handguns when they opened fire yesterday. Reports say that all 4 weapons were legally purchased. In regards to the rifles, if they were legally purchased in California, that means they are California-compliant and not legally considered assault weapons at all.

How ever you look at it, this just doesn’t make any sense. The only thing that is true is that Obama is once again using a tragedy to push his unconstitutional gun control agenda.

The fact remains that California has some of the toughest gun control laws in the country, including an assault weapons ban. The state also has laws against shooting people and murder. For some reason, all of these laws on the books failed to stop a couple of Islamic terrorists from committing an unspeakable act of evil. When are democrats going to face the fact that some people simply don’t follow the law and punishing those who do is not the answer?