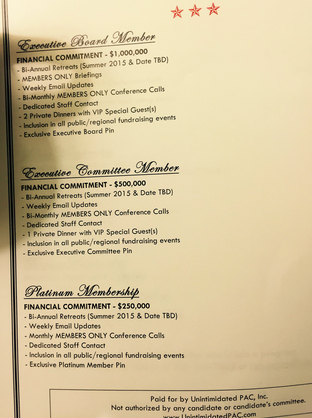 Wisconsin Gov. Scott Walker has put a pricetag on how much it will cost to join his inner circle, where you can meet with the 2016 GOP presidential candidate and have “dedicated staff contact” to ensure that your agenda will heard and noted.

On Monday, while Walker was making the rounds on Capitol Hill in Washington, his super PAC—the latest campaign finance loophole-contorting tactic—was handing out formal printed invitations to join at the $1 million, $500,000 and $250,000 level that described just what political investors would get for their money.

The Milwaukee Journal-Sentinel newspaper published the super PAC invitation while reporting on Walker’s visit to the capitol.

Walker’s super PAC charade is just the latest example of how 2016 candidates are making a mockery of the little that remains of federal campaign finance law, where the maximum legal contribution from individuals to one candidate is supposed to be $2,700 in the primaries and $2,700 in the general election.

Anybody who has been paying attention to the democracy-destroying role of big money in politics knows that every successive election cycle unearths new ways for the wealthy to buy access and influence with candidates. Does anybody giving $1 milliion to Walker’s super PAC really believe their money will not gain access to Walker’s ear?

This ruse of pretending campaigns are not campaigns, and unannounced candidates are not candidates, has been going on for years. It began in the mid-1970s, when the U.S. Supreme Court ruled that spending money in elections is not just an activity but an expression of free speech under the First Amendment. The Court’s 2010 Citizen United ruling and others that followed in the federal courts unleashed today’s super PAC. The result, seen today, is how candidates are vying for, and finding, billionaire sponsors. Ordinary voters are completely left out of this game, which especially on the GOP side will shape the nominating process.

But apart from wringing one’s hands about the slow death of what is supposed to be a democratic electoral process is what Walker’s latest brazen gambit says about the man himself. He’s under investigation in Wisconsin by a team of bipartisan elected prosecutors for political corruption under that state’s election laws. Clearly, Walker doesn’t care the slightest about even keeping an appearance of not being yet another politician whose attention is for sale—or rent.

Walker is not unique in this regard. But this is another sign of his character and reveals how he’s a bit of an amateur at playing in the biggest political leagues. The public might just shake their head and say, Everybody’s doing it—even Hillary has a super PAC. It’s true, and the explanation given is nobody can unilaterally disarm.

But Hillary isn’t walking the halls of Congress this week with a proverbial million-dollar begging cup in hand. Walker’s people, on the other hand, have more of a screw-you attitude: they’ll do things the way they want, consequences be damned. That’s a pretty good indication of the kind of president he would be. Let’s hope people take notice.