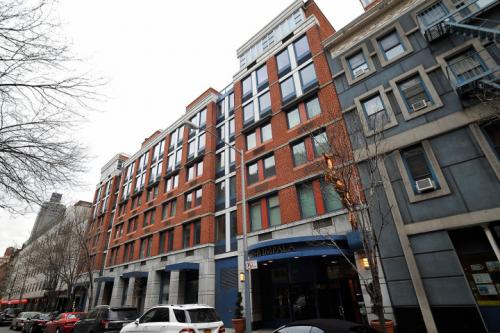 Not a week seems to pass without some banker or trader committing suicide. Today we get news of the latest such tragic event with news that 28-year old Kenneth Bellando, a former JPMorgan banker, current employee of Levy Capital, and brother of a top chief investment officer of JPM, jumped to his death from his 6th floor East Side apartment on March 12.

From the NY Post:Bellando, a former investment bank analyst at JPMorgan, is the son of John Bellando, chief operating officer and chief financial officer at Condé Nast. His brother, John, a top chief investment officer with JPMorgan, works on risk exposure valuations.

Several John Bellando emails were cited during testimony at the Senate Finance Committee’s inquiry into the bank’s losses during the infamous London Whale trade fiasco.

Kenneth Bellando — who grew up in Rockville Center, LI, and was a Georgetown graduate — worked as a summer analyst at JPMorgan while in school. Upon graduation in 2007, he was hired as an investment bank analyst and worked there for one year before moving on, according to his LinkedIn page.

The investment banker then went to Paragon Capital Partners, according to his LinkedIn page, until leaving at the end of 2013.

And so another young life is tragically taken before his time, the 11th financial professional to commit suicide in 2014, and the third in as many weeks. How many more to come?

In summary, here are all the recent untimely financial professional deaths we have witnessed in recent months:

1 – William Broeksmit, 58-year-old former senior executive at Deutsche Bank AG, was found dead in his home after an apparent suicide in South Kensington in central London, on January 26th.

3 – Gabriel Magee, a 39-year-old JP Morgan employee, died after falling from the roof of the JP Morgan European headquarters in London on January 27th.

4 – Mike Dueker, 50-year-old chief economist of a US investment bank was found dead close to the Tacoma Narrows Bridge in Washington State.

5 – Richard Talley, the 57 year old founder of American Title Services in Centennial, Colorado, was found dead earlier this month after apparently shooting himself with a nail gun.

6 – Tim Dickenson, a U.K.-based communications director at Swiss Re AG, also died last month, however the circumstances surrounding his death are still unknown.

7 – Ryan Henry Crane, a 37 year old executive at JP Morgan died in an alleged suicide just a few weeks ago.  No details have been released about his death aside from this small obituary announcement at the Stamford Daily Voice.

11 – Kenneth Bellando, 28, a trader at Levy Capital, formerly investment banking analyst at JPMorgan, jumped to his death from his 6th floor East Side apartment.