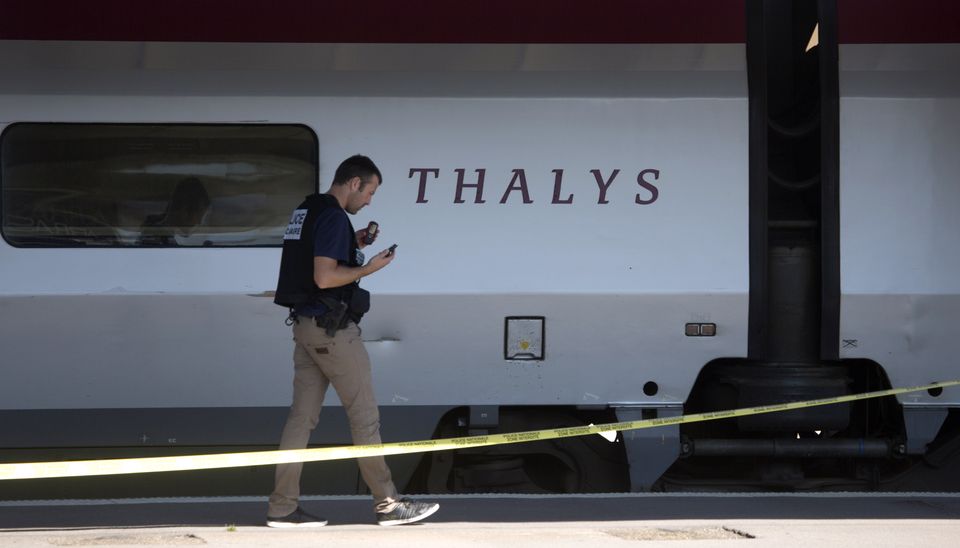 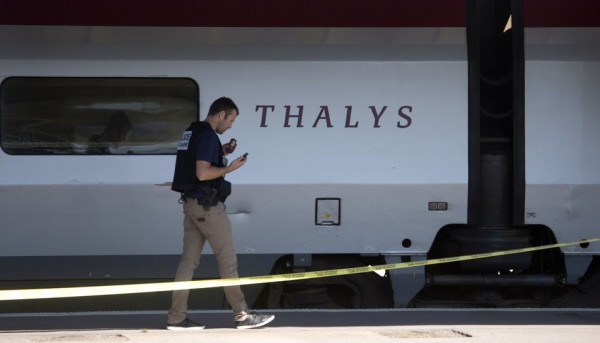 A police investigator walks next to a Thalys train on the platform at Arras train station, northern France

Arras, France | Yesterday (Aug. 21st), an unnamed man attempted to fire into a European high-speed train, en route between Amsterdam and Paris. Before his intentions were materialized however, he was swiftly disabled by 3 Americans who have since been praised by the French town of Arras and Europe as a whole.

Spencer Stone an Air Force serviceman, Anthony Sadler, a senior at Sacramento State University and Alek Skarlatos, a National Guardsman from Roseburg, Oregon who are also childhood friends; were traveling through Belgium when the situation began to unfold. A gunshot and the breaking of glass caught their attention, they then witnessed a train-employee sprint down the aisle as the gunman appeared, wielding an automatic rifle. 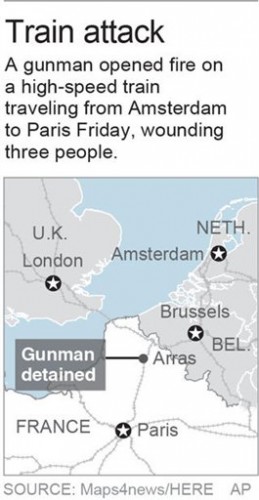 Sadler described the rest of the incident when questioned by the Associated Press:

“As he was cocking it to shoot it, Alek just yells, ‘Spencer, go!’ And Spencer runs down the aisle, … Spencer makes first contact, he tackles the guy, Alek wrestles the gun away from him, and the gunman pulls out a boxcutter and slices Spencer a few times. And the three of us beat him until he was unconscious.”

Throughout the brief but chaotic episode, Sadler said that, “The gunman never said a word.”

Stone has since been hospitalized, but his injuries are not life threatening. One man was also wounded when the gunman fired a pistol, while another French passenger received minor damage while activating the train’s emergency alarm.

The French town of Arras, would award the men special medals overnight, the mayor would say, “I wanted them to feel recognition not only from the city but also from French people in general and from all people who are against terrorism,”.

French counter-terrorism police are leading the following investigation, with Belgium authorities opening their own case on the grounds the man boarded the train in Brussels. European police agency, Europol, has offered its assistance into the investigation as well.

After the conflict, soldiers were seen patrolling the train’s platform, on guard.

French Interior Minister Bernard Cazeneuve told press in Paris on Saturday, that the gunman may be a 26-year-old Moroccan; an anonymous Spain official also said the suspect lived in Spain until 2014, then to France, briefly in Syria, to then return to France. This is not 100% confirmed information however.

Cazeneuve would then state that the man was flagged by Spanish authorities last year for links to Islamic radical movements.

I have a few questions myself about this incident. Such as, was he under investigation if flagged a year ago? If so, why was this man allowed to travel freely?

France has been locking down on freedom of expression as a result of the Charlie Hebdo shooting that occurred earlier this year. In March over 100 people were arrested in France for “defending terrorism” after the tragedy.

In light of these occurrences, I have been personally asking myself – who could this benefit?

Let’s say that this man is whom the authorities say he is; he’s spent time in the war-ravaged country of Syria, which could mean this man is a product of the “West’s” actions – particularly the United States.

I’m not saying that is the truth, but is the possibility of Problem-Reaction-Solution being used by those seeking more power and evermore lockdown on individual freedom – that “far-out”?