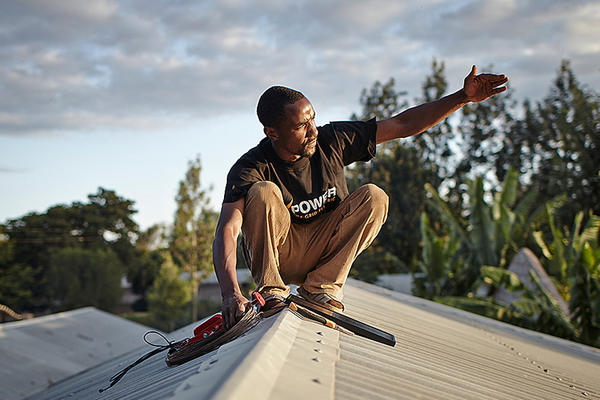 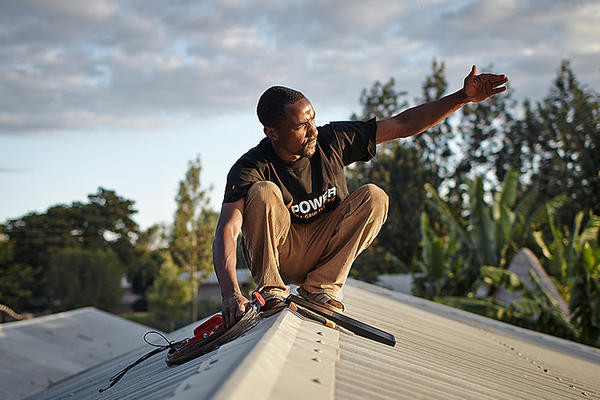 By Tanzanian standards, Nosim Noah is not poor. A tall, handsome woman with the angular features of her fellow Masai tribe members, Ms. Noah makes a good living selling women’s and children’s clothes in the markets of this northern Tanzanian city. The four-bedroom brick house she shares with her parents and three children outside town has many modern comforts: mosquito screens on the windows and doors, a gas cookstove, and, most important, a faucet with running water in the back of the yard, next to a stall with a working toilet.

But despite their relative prosperity, up until late 2013, the family had no electricity.
“We waited 10 years for them to turn the power on – 10 years and nothing,” says Noah.

Then, one afternoon, the Noahs had an unexpected knock on the door. An agent for a new electrical company called M-POWER said that, for a sign-up fee of only 10,000 shillings ($6), he could install a fully functioning solar home system in their house – enough to power several LED lights and a radio. The payoff was immediate. While Noah used to spend $18 a month on kerosene, she now pays a monthly average of $11 for her solar lighting, and she no longer has to go into town to charge her cellphone. The person most affected, though, may be her 2-year-old daughter, Emilia, who is afraid of the dark.

“She would cry every night – every single night,” says Noah. “It was a struggle to put her to sleep.” Now, with a new light above her bed, “it makes a huge difference,” she says.

The changes taking place under the Noahs’ roof are emblematic of a quiet revolution sweeping across much of rural Africa and the developing world.

Until recently, the lack of electricity in many poor areas was seen as something of an inevitable fact of life. Building power grids across long distances to reach remote communities is slow and costly, and when the people in those communities are subsistence farmers living on less than $2 a day, the returns often fail to justify the massive investment.

Now, however, a new solar energy movement is bringing kilowatts to previously unlit areas of Africa – and changing the lives of hundreds of thousands of people. The idea behind the latest effort isn’t to tap the power of the sun to electrify every appliance in a household. Instead, it is to install a small solar panel not much bigger than an iPad to power a few lights, a cellphone charger, and other basic necessities that can still significantly alter people’s lives.

Going smaller better fits the budgets of the rural poor. People use the money they normally would spend on kerosene to finance their solar systems, allowing them to pay in small, affordable installments and not rely on government help. The concept is called pay-as-you-go solar.

Many see it as helping to overcome the problems that have plagued previous solar “revolutions” in Africa. Richard Hosier, a senior analyst at the World Bank, likes to tell the story of his first encounter with solar panels in Africa.

“It was in a village in Kenya, in 1981, during the Carter administration,” he recalls. “There were solar panels all right – cut into little bits to make necklaces for the women.”

African villages, Mr. Hosier says, are littered with failed solar projects donated by well-meaning government agencies or nongovernmental organizations that installed the technology but couldn’t afford to follow up with maintenance or battery replacements.

While some remain skeptical of the new approach, many believe the scale of the current movement, coupled with the involvement of local entrepreneurs and the changing economics of solar power, will make it different this time around. Some observers are even asking, Will rural Africa leapfrog the carbon energy age altogether and go directly to a solar-powered future?

No one doubts the need to bring kilowatts to remote areas of the developing world. According to the International Energy Agency, more than 1.3 billion people – one-sixth of the world’s population – lack access to modern energy services. In Tanzania, 81 percent of the population live without electricity.

Instead, many of these people rely on candles, battery lamps, and CO2 -emitting kerosene lanterns and diesel generators to light their homes. This can be expensive. Kerosene and diesel, the two main fuels available to the poorest of the poor, are among the costliest for consumers. The United Nations Environment Program estimates that Africans spend between $12 billion and $17 billion a year on fuel-based lighting. In Asia, people spend $9 billion to $13 billion.

These fuels are also dirty. Burning kerosene in African homes and small businesses causes an estimated 30 million to 50 million tons of CO2 emissions annually, according to a 2010 study commissioned by the World Bank. Globally, kerosene use releases 190 million tons of CO2 into the atmosphere each year – an amount greater than the emissions of Australia and Britain combined. Replacing all of the world’s kerosene lamps with clean energy sources would have the same environmental impact as taking 30 million cars off the road, the study noted.

Underlying this welter of statistics is the main reason that advocates think the moment is propitious for a small solar revolution in Africa – improving economics. The Global Off-Grid Lighting Association, a nonprofit group based in the Netherlands, estimates that an African household living on $2 a day can save as much as 86 percent of its expenses for kerosene and mobile-phone charging by switching to solar.

Many residents of Tanzania who have installed solar panels have already felt some of these effects on their wallets, as well as in other ways. In one village, a resident describes how he’d stopped feeling the throbbing pain behind his eyes that came from working evenings in dim light.

In another case, a woman says that her 3-year-old son’s chronic cough improved dramatically once he stopped breathing in kerosene fumes daily. Salome Simon, a young single mother in the northern Tanzanian village of Oldadai, mentions a more unusual benefit: Thieves stopped stealing the chickens in the coop outside her house after she hung a bright solar-powered LED light above her doorstep.

Yet solar is spreading for other reasons as well. As technology has improved, the cost of photovoltaic panels has dropped by more than 99 percent since 1977. LED lights and batteries are also becoming increasingly affordable.

Perhaps even more important, a new technology has come along in recent years that has had a deeply transformative impact on developing economies: cellphones. Cellular networks in Africa have spread at a pace that no one anticipated a decade ago, now covering more than 85 percent of the continent.

“Say you’re one of our customers, a Tanzanian farmer living on less than $5 a day,” says Xavier Helgesen, cofounder and chief executive officer of Off-Grid Electric, M-POWER’s parent company.

“You won’t have electricity, and you certainly won’t have a bank account, but you’ll have a cellphone.”

Their ubiquity, along with the development of mobile payment technologies that are commonly used by Africans, has helped change the calculus for entrepreneurs such as Mr. Helgesen. Before, transactions in rural Africa were cash-only – an open window for corruption, and a huge obstacle to business. Now, M-POWER’S solar home systems have meters digitally linked to the customers’ cellphone numbers. No matter how poor they are, or how remote their village is, customers can pay for the electricity consumption recorded by the meter simply by sending a text message.

All these factors have emboldened a generation of entrepreneurs to venture into the Wild West that is the last mile of electrification. Companies with business models rivaling M-POWER’s are flourishing all across East Africa, South Asia, and to a lesser degree in South America (where existing electrification rates are higher). According to the Consultative Group to Assist the Poor (CGAP), a World Bank-backed umbrella group of 34 organizations, at least 25 companies are promoting pay-as-you-go solar products and services across the developing world, with an estimated 250,000 such products sold as of late 2014. The organization projects that at least 3 million pay-as-you-go solar systems will be sold around the world in the next five years.