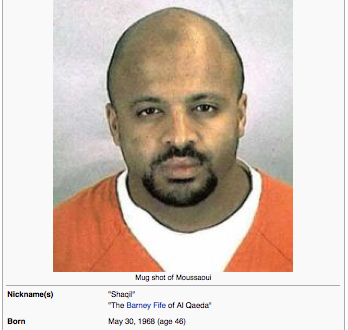 Zacarias Moussaoui was the bookkeeper for Al Qaeda, but the U.S. intelligence services have been keeping this fact secret as much as they can, because what he knows about the crucial financial backers of Al Qaeda can be very damaging to the U.S. aristocracy, which is heavily oil-based and closely allied with the Saudi royal family, which created Al Qaeda in order to please the Saudi clerics, who are Wahhabist Muslims who constantly threaten the royals with exposure of their economic and sexual corruption unless the royals finance the spread of the Wahhabist sect (such as by Al Qaeda), and thereby finance the spread of those clerics’ own international influence and power.

Or, so says the former bookkeeper of Al Qaeda, who was selected by Al Qaeda’s military chief, Abu Hafs (also known as “Mohammed Atef”), to serve Osama bin Laden in that capacity: Zacarias Moussaoui. This is his testimony, in brief.

If you will look at the wikipedia article on Moussaoui, it says nothing whatsoever about his having graduated with a Masters in International Export Business degree from the Institute of Export in France, the French affiliate of the UK’s Institute of Export. That’s how he described himself on the very first day of his testimony. Then, on the second day of his testimony, he was asked what qualifications he had presented to Osama bin Laden, and he answered in more detail, and listed several: