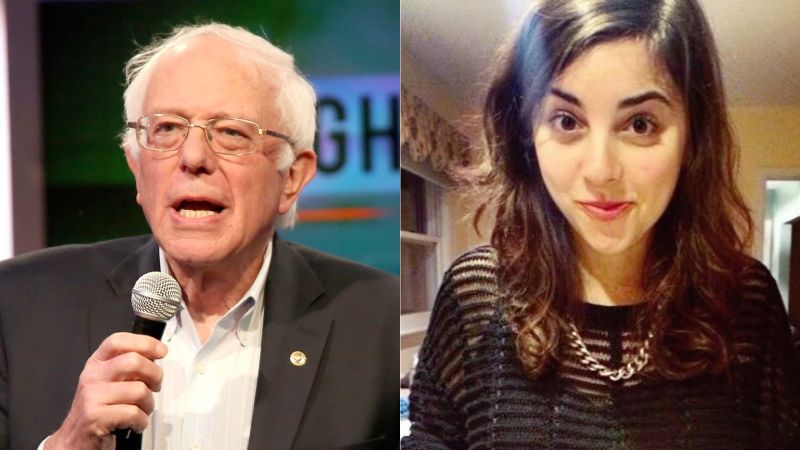 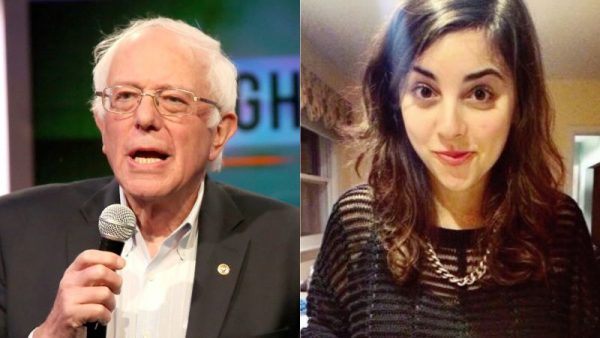 In an act of political cowardice, the campaign of Bernie Sanders has suspended a young staffer named Simone Zimmerman, who was recently hired to coordinate the campaign’s outreach to Jewish communities, for criticizing Benjamin Netanyahu, the right-wing Prime Minister of Israel, in a year-old post on Facebook. The New York Times has the details:

“She has been suspended while we investigate the matter,” Michael Briggs, a spokesman for Senator Bernie Sanders, wrote in an email. Ms. Zimmerman’s suspension comes after a report on Wednesday in The Washington Free Beacon, which found a Facebook post in which she used a vulgarity and described Mr. Netanyahu as “arrogant, deceptive, cynical” and “manipulative.” She then used more aggressive language and continued that he had “sanctioned the murder of over 2,000 people this summer.”
The linked report, written by Noah Pollak of The Emergency Committee for Israel, contains screenshots of Zimmerman’s Facebook account, where she published a note critical of Netanyahu and his administration’s decision to prolong the State of Israel’s occupation of the Palestinian territories. The “vulgarity” referenced by the Times appears to be this part of the note: “Fuck you, Bibi, for daring to insist that you legitimately represent even a fraction of the Jews in this world[.]” Zimmerman later substituted “Shame on you” for “Fuck you.” The entire original note, which Zimmerman authored in March 2015, reads:

Bibi Netanyahu is an arrogant, deceptive, cynical, manipulative asshole. He is the embodiment of the ugliest national hubris and the tone-deafness toward the international community. Fuck you, Bibi, for daring to insist that you legitimately represent even a fraction of the Jews in this world, for your consistent fear-mongering, for pushing Israel, in word and deed, farther and farther away from the international community, and most importantly, for trying to derail the potentially historic diplomatic deal with Iran and thus trying to distract the world from the fact that you sanctioned the murder of over 2,000 people this summer, that a brutal military occupation of millions more continues under your watch, and that you are spending time and money on ridiculous campaign opportunities like this instead of actually working to address the real needs of your own people.

Netanyahu insulted our President but also much worse. He does not speak for me as a Jew, an American, and as a thinking person. #BibiDoesntSpeakForMe
It was no secret, when Sanders appointed her three days ago, that Zimmerman, who is Jewish and has served in a number of anti-occupation organizations, is highly critical of Israel and its elected leaders over the country’s treatment of the Palestinians—a position held by an increasingly large and vocal portion of her demographic cohort. As Slate’s Michelle Goldberg explained earlier this week, “A zealous activist against Israel’s occupation of Palestine, Zimmerman represents many social justice–minded young Jews whose views have been largely excluded from mainstream politics.”

Zimmerman’s suspension comes five days before New York State’s Democratic primary on April 19, and just one day after Sanders appeared at a large rally held in Manhattan’s Washington Square Park. According to recent polls, Jewish New Yorkers favor Hillary Clinton, who is Methodist, over Sanders, who is Jewish, by double-digit margins. According to the Times, several leaders in New York’s Jewish community have called upon the Sanders campaign to fire Zimmerman.

Reached by email, Zimmerman declined to comment. The Sanders campaign did not immediately return a request to clarify the status of the investigation into her Facebook post. If you know any more about this, please get in touch.