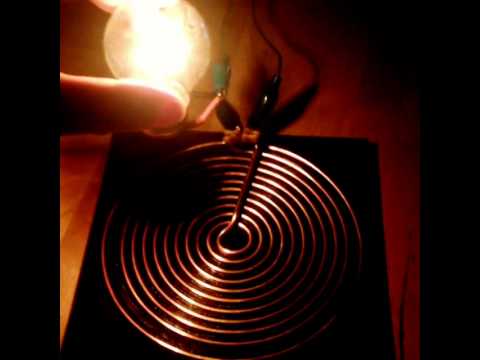 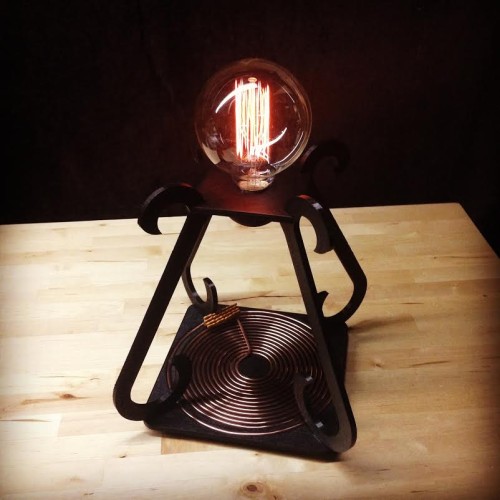 When we look back in history at some of the most notable inventors of the past several decades, one man stands near or at the top when it come to making contributions to technological development. That man is Nikola Tesla, and one of his mentors (and rivals) was another well-known inventor, named Thomas Edison. Tesla is responsible for patenting the design of the alternating current electricity supply system. If it were not for him, most of our electronic devices wouldn’t be here today as we know them.

Sometimes I wonder what Tesla would have contributed to society if he were to still be alive today. What would he think about today’s super computers, smartphones, tablets, and LED lights? What would his reaction to 3D printing be, and how would he use it to aid in his inventions?

Unfortunately Tesla passed away 72 years ago, and he never had the opportunity to see a 3D printer. However, one man, named David Choi, has taken some of Nikola Tesla’s contributions and combined them with 3D printing.

“Nikola Tesla’s life and experiments have always intrigued me,” Choi tells 3DPrint.com. “After seeing Tesla Coils light up fluorescent and incandescent bulbs without wires, I was enthralled. I even named my cat Tesla.”

Choi admits that he failed physics in high school, but then decided to pursue it on his own. He majored in physics at Wesleyan University but in his spare time he studied electronic design in his dorm room. He tells us that physics taught him the amazing power of resonance.

Because of his love for Tesla, Choi wanted to create something using today’s modern 3D printing technology, based on inventions discovered by Tesla. His creation, called the ‘Wirelessly Powered Tesla Desk Lamp,’ is quite the unique piece.

Printed on his MakerBot Replicator 5th Generation 3D printer, the lamp operates at 6.5MHz, and is optimized to power a vintage 25W Tesla light bulb.

“The design started with the base of the lamp which is the most critical part,” Choi tells us. “It consists of two separate coils that are inductively coupled to each other. One coil is a spiral form and is capacitively loaded and tuned to resonance. The second coil is simply a loop that follows the circumference of the spiral inductor. 3D printing the base made my life incredibly easy. I first performed calculations to create an inductor that would match with my load (the bulb). Then all I had to do was lay the 1/8? copper tubing into the spiral form. The rest of the lamp, from the legs to the top have no real geometrical features that present itself in the circuit. It was purely aesthetic, including the vintage Tesla commemorative bulb used.” 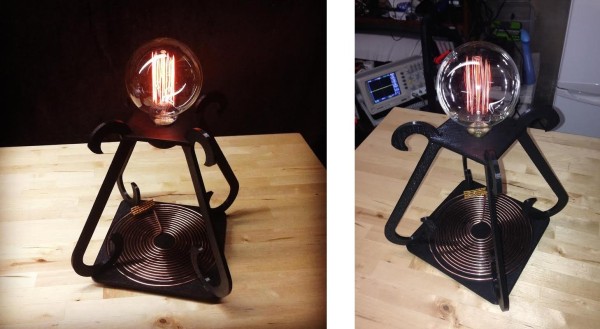 As for how this lamp works, it sits on a table which has a 6.5MHz, 30W transmitter built into its underside. This center-tapped, double-wind coil is inductively coupled to a much larger loop antenna which has a high Q (quality) factor. This means that it is very efficient when it comes to storing reactive power. The antenna, like the table is tunable and set to a resonance of 6.5MHz.

The receiver is actually the lamp’s base. It includes a spiral-wound, capacitively loaded coil as well as a secondary, single loop coil. The spiral shape creates a flat inductor that can be used for many applications, while the single loop is directly wired to the light bulb itself.