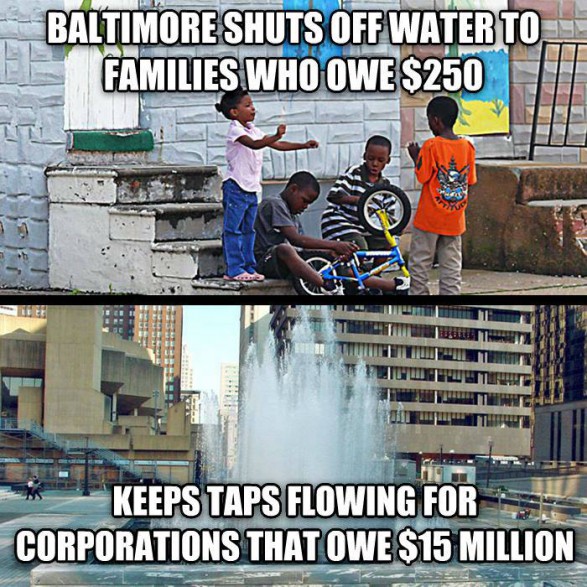 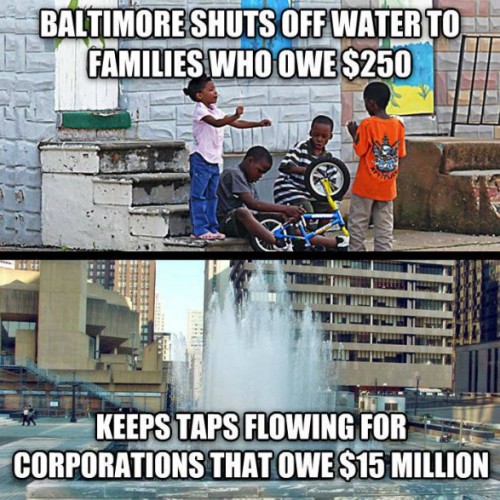 Baltimore officials, trying to collect some $40 million in long-unpaid water bills, have shut off service to more than 1,600 customers in the past six weeks.

But records reviewed by The Baltimore Sun show the city’s enforcement has been starkly uneven.

While large commercial properties owe the biggest amounts, not one has been shut off. All of the service cuts so far have been to homes.

And while the majority of homes with unpaid bills are in the city, nearly 90 percent of shut-offs have been in Baltimore County. Dundalk and Gwynn Oak have each had more service cuts than all of Baltimore.

Baltimore County Councilman Todd Crandell, a Republican who represents Dundalk, said he found it “odd” that his community, with a population of less than 64,000, saw more enforcement than a city more than 10 times that size. He has asked officials to verify the accuracy of their data.

“There have been a lot of billing errors and mistakes,” he said. 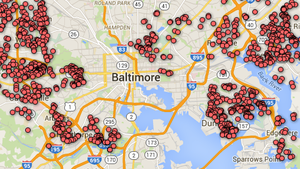 Houses that are getting water shut off

“If the city can shut off 1,600 working families from their water, but hasn’t shut off even one commercial account, I think that speaks volumes about where their priorities are,” she said.

Jeffrey Raymond, a spokesman for the city Department of Public Works, cautioned against drawing conclusions from the first weeks of enforcement data.

“We’re making every effort to make collections without turning off water,” he said. “Several large customers have paid, or made arrangements to do so. Others have not yet sent payments or made payment arrangements and remain subject to turnoff.

“I would remind you we are just in our sixth week of the turnoff season, which lasts through October. [Public Works Director Rudolph P. Chow] has signaled his insistence that large customers who do not pay their bills or take necessary steps to do so will be subject to turnoffs.”

He said the city has lost revenue because it didn’t go after delinquent commercial accounts in previous years.

“We should do it a way that’s fair across the board,” he said. “The city should not allow businesses to run up high bills. We’ll probably never collect from the former Bethlehem Steel plant.

“It’s absolutely wrong to nickel-and-dime the average taxpaying resident and allow the business to get away with not paying for long periods of time.”

Baltimore provides water not only to the city but also to the surrounding counties. About half of its 400,000 customers are in Baltimore County.

More than 350 large commercial accounts — a category that includes businesses, nonprofits and government offices — account for a total of $15 million in unpaid water bills.

The largest amount is owed by subsidiaries of the bankrupt Sparrows Point steel mill. They owe $7.3 million.

An attorney for subsidiary ISG Sparrows Point said the company has asserted for years that it has been overcharged by the city.

Attorney Nancy White pointed to a 2011 decision by the state Court of Special Appeals over a bill of $2.3 million in which the judges ruled the city had not allowed the company its right to contest its bills through an informal hearing system.

“A hearing system that is not on the record, restricts parties in a dispute over $2.3 million water bills to fifteen minutes and denies parties the right of cross examination does not pass constitutional muster,” the judges wrote.

No representatives from these organizations responded to requests for comment.

City records list the Pennington Partners bill as “in dispute.” The others are listed as either “non-payment” or “no contact” with city government.

Both the GSA and MEDCO told The Sun they were in the process of paying their bills.

The city, meanwhile, has focused its enforcement on the blue-collar communities of Baltimore County.

Of the 170 accounts shut off in Baltimore, many are in East or Southwest Baltimore, records show.

Crandell said that when constituents call his office about water turn-off notices, his staff urges them to set up payment plans.

“The account holder needs to do their part and try to rectify it,” he said. “If you’re just refusing to pay your bill, there’s not a lot that can be done.”

Crandell’s staff also steers constituents toward financial assistance programs for which they might be eligible. If a family can’t pay a water bill, Crandell said, they’re probably facing other financial pressures.

“The water bill is probably the smallest bill in the household,” he said.

Raymond said more than 900 of the 1,600 shut-offs have paid their bills and had their water restored.

Meanwhile, nearly 7,000 people have made payments on overdue accounts, he said, contributing about $6.3 million. About $1 million came from large commercial properties.

More than 1,100 people have entered into payment plans, he said, and the city is considering more than 400 applications for senior discounts.

Raymond said the city continued shutting off water during the rioting and unrest in Baltimore, but avoided neighborhoods it deemed too dangerous for workers.

He said the Public Works Department was “focusing initially on the county” as a way to avoid enforcing water shut-offs on homes in the city that might be facing a tax sale.

City officials announced in March they were sending shut-off notices to about 25,000 customers who owe a collective $40 million in long-overdue bills. They said they would shut off water to customers with unpaid bills of more than $250 dating back at least half a year. The notices included an estimated date for cutting service, generally within 10 days of receipt.

Activists — including unions, advocacy groups and religious organizations — have held protests asking the city to collect overdue bills from commercial accounts before going after residents. They demanded the city impose a moratorium on shut-offs until officials conducted more outreach to residents and came up with a plan to protect renters if their landlords didn’t pay water bills.

Chow has said the program is necessary to stop freeloaders from taking advantage of the system. He said payment plans and grants are available for low-income residents.

The problem of unpaid water bills in Baltimore has grown significantly in recent years. About 19,500 customers owed $29.5 million in April 2013, records show. Since then, the amount owed has grown by more than 35 percent.

Chow has said the problem has grown in part because some Baltimore neighborhoods have been slow to recover from the recession, and because widespread water-billing errors in 2012 made officials reluctant to shut off water.

He said city workers make at least two phone calls to businesses, government offices and apartment complexes with overdue bills before water is cut off. Customers who pay will have their water turned back on within 24 hours, officials said.

City Council President Bernard C. “Jack” Young has worked for years to help low-income residents with their water bills. He said he was pleased to see more than 1,000 people have entered into payment plans.

“Some businesses have been disputing their water bills,” he said. “That puts a hold on shut-offs while they’re disputing. But we’re going after those businesses. They’re not getting away. Eventually, they’re going to pay.”