Concepcion Picciotto, a homeless anti-war protester has died at age 80 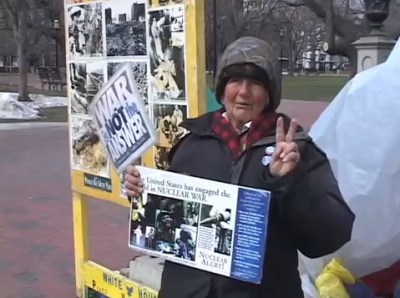 Concepcion Picciotto, a homeless anti-war protester has died at age 80, after occupying an area outside the white house for over 30 years. Ms. Picciotto is a Spanish immigrant, who is known by many as “Connie” or “Conchita.”

She began the longest running political protest in US history out front of the White House in 1981. Since then she has literally lived at the spot, spending 24 hours per day and 7 days a week at the vigil that she created.

The vigil showed a variety of anti-war and anti-nuclear slogans and had coordinated with local anti-war activists to provide information to passers-by.

Over the years, Picciotto’s vigil became a DC landmark for many, and a meeting place for activists.

Throughout the duration of her occupation, she has been attacked my police and citizens alike, arrested, and the government has many times attempted to eject her from the site. However, local support had managed to keep her where she was for 33 years. Recently, her health took a turn for the worse and she began staying at a local homeless shelter where she died on January 25th.
This article (Homeless Woman Who Protested War Outside White House For 3 Decades Straight Dies At Age 80) is free and open source. You have permission to republish this article under a Creative Commons license with attribution to the author and TrueActivist.com.

John Vibes is an author and researcher who organizes a number of large events including the Free Your Mind Conference. He also has a publishing company where he offers a censorship free platform for both fiction and non-fiction writers. You can contact him and stay connected to his work at his Facebook page. You can purchase his books, or get your own book published at his website www.JohnVibes.com.