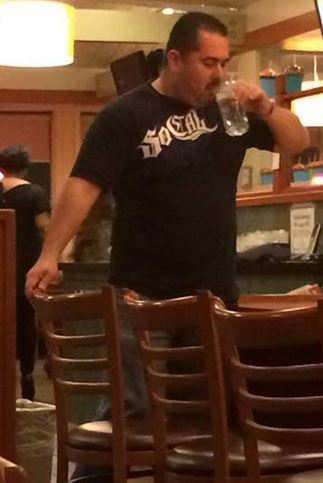 CALIFORNIA — Manuel Ramos, the cop seen on video beating Kelly Thomas to death, had to leave a place of business last weekend. Nationwide outrage was sparked when Ramos and his partner Jay Cicinelli were found “not guilty” of murder, despite beating the mentally ill homeless man to death as he begged for his life.

Last weekend, Ramos had the nerve to show his face in public.It happened when families and patrons were enjoying their dinner at Denny’s in California.

The last thing they expected was to be interrupted by Ramos waddling inside with a “So Cal” shirt stretched around his stomach.

They were immediately uncomfortable with his presence and began complaining.

As the complaints were made Ramos “got up and left,” according to a patron who snapped a photo of him guzzling his drink before leaving

“Killer cops aren’t welcome here,” was captioned with the photo, which is going viral online.

The patron explained what happened as follows in a report sent to We Copwatch:

“So last night at Denny’s we saw this “cop” (the one that killed Kelly Thomas) his ass SHOULD be in jail.. & thank fully the people next to him complained and he got up and left .. I hope it is like that the rest of your life going places, Kelly Thomas has no choice of doing anything he wants to do cause of you .. Enjoy your “freedom””‘

The action has been met with strong support from thousands across the country.

As a documented murderer and coward, Ramos will certainly face this situation over and over again.

He will be forced to leave establishments, businesses will refuse him service and kick him out, and American citizens will shame him in public.

Many officers commit suicide due to intense stress levels.

Another commenter suggested “Maybe he’ll get jumped leaving a place like this someday.”

Any American who enacts justice upon Ramos would surely be hailed as a hero and honored for generations.

Before beating Kelly Thomas to death, Ramos can be heard on video saying “See these fists? They’re about to fuck you up.”

As Kelly pleaded for his life and begged for help, Ramos showed him no mercy and continued pummeling him until he died.