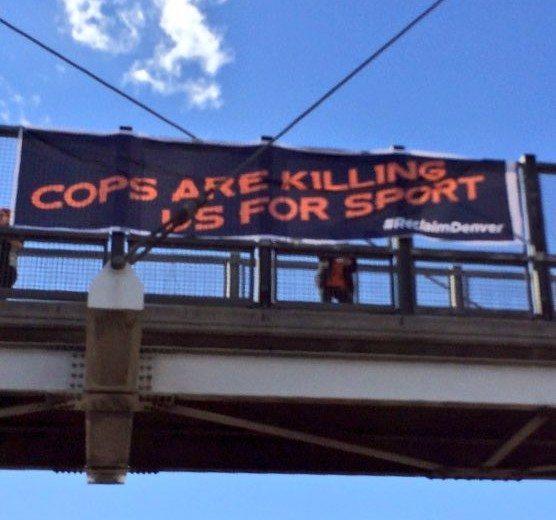 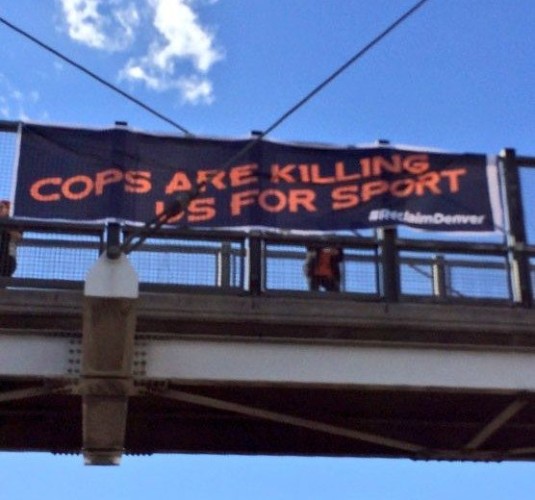 Denver, CO – In a courageous display of solidarity and in the true spirit of community, clergy and concerned Coloradans unveiled a banner reminding game goers and attendant media that “Cops Are Killing Us For Sport” ahead of the 1:05pm MST kick-off of the National Football League (NFL) American Football Conference (AFC) championship game, to stand against racist policing and systemic violence.

#ReclaimDenver unveiled the banner on the north face of Highland Bridge during the rush of pre-game tailgating traffic as a show of resistance against the systemic unrepentant oppression of Black, Brown, Indigenous, Queer, Poor, and other marginalized people throughout greater Denver.

Today, #ReclaimDenver did what Denver’s Mayor Michael Hancock refuses to do: took action to protect the people of Denver from police terror. People and vehicles came to a stop, witnessing the demand for a stop to state violence in Denver and beyond. Interested persons can follow updates via Twitter: @ReclaimDenver.

Far bigger than Broncos vs. Patriots is a fight for survival: marginalized people versus institutionalized racism. In the shadow of Mile High Stadium are Denver communities ravaged by rampant gentrification, families devastated by lethal police brutality. A Sunday that should be celebratory is instead marred by mourning.

Paul Castaway was as deeply committed a Broncos fan as there is; he should be alive to enjoy this game. So should Marvin Booker, Michael Lee Marshall, Alonzo Ashley, and every person killed by Denver law enforcement, whose murders all went unprosecuted under the administration of Mayor Hancock.

When leaders refuse to lead, the people must refuse to follow. We call upon the elected and appointed so-called “leaders” of Denver and its environs to honor the following demands forthwith:

1. Immediate release of Sharod Kindell from custody.
2. Immediate termination of the deputies who killed Michael Lee Marshall.
3. Immediate intervention of the Department of Justice to lead a federal investigation of the continued
racist conduct by the administration of Denver Mayor and City Councilors, Denver Police, Denver Sheriffs,
and Denver District Attorney.
4. Immediate amnesty for all persons facing criminal charges related to protest activity in Denver.
5. Immediate repeal of the Urban Camping Ban”, and immediate resignation of its chief proponent: Denver
City Councilman Albus Brooks.
6. Immediate resignation of Denver Mayor Michael Hancock.
Just as Michael Lee Marshall’s murder was not isolated, similarly: today’s action is not an isolated event. This banner serves to put Mayor Hancock and all others who encourage stage violence that we will not stand idly by while our people are slaughtered with impunity. More disruptive actions will occur as long as necessary until the above demands are met, and until there is a demonstrable precipitous decrease in police violence in and near Denver, Colorado. We stand in Solidarity with Oakland. Ferguson. Cleveland. New York City. Chicago. Palestine. Baltimore. Minneapolis. Ayotzinapa. Ankara. We stand for Michael Lee Marshall. We stand united.